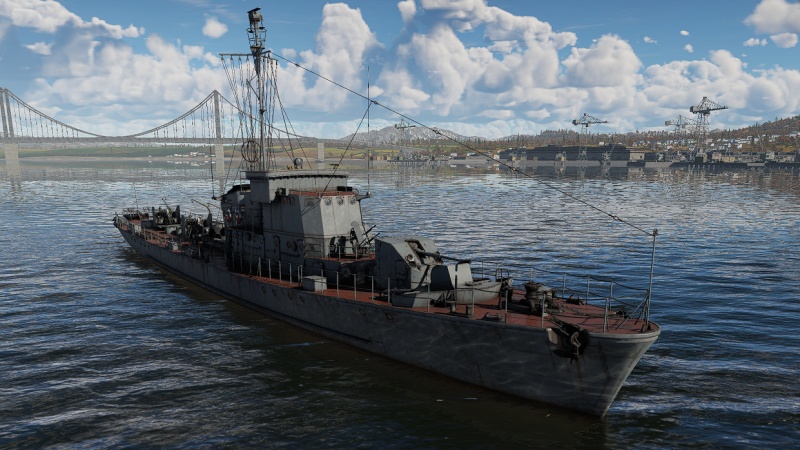 The MPK Pr.122bis is a premium gift rank II Soviet sub-chaser with a battle rating of 2.3 (AB/RB/SB). It was introduced in Update 1.87 "Locked On" as a reward for the 2019 "Battlefield Engineer" crafting event.

The MPK Pr.122bis has a good armour, her most well defended zone is at the centre and her most vulnerable area is the primary weapon. The ammo magazines are not much of a problem because they are well protected.

The crew size of the boat is 60 sailors, which is consequent and makes it hard to knock out the boat just with crew depletion.

The MPK Pr. 122bis has mediocre mobility at best. The ship can nominally make 39 km/h maximum forward speed in Realistic, though the actual operating speed of the vehicle will typically be lower. The ship's turning circle and rudder shift time are all rather inadequate, meaning that the ship takes a long time to accelerate and turn. As a result, captains of the MPK Pr. 122bis must always stay alert, as the ship must take early evasive action to avoid any torpedoes or obstacles.

The primary weapon on the MPK Pr.122bis is the 85 mm 90-K cannon. A good gun in its own right that only really needs high-explosive shells to handle most of its opponents. Due to the cannon's ability, most battles may only require up to 100 shells to be brought in for the match. The gun has great frontal firing arcs, reaching all the way to the ship's sides to nigh-rear, with the ±160° horizontal traverse range. However, the slow traverse speed means that the MPK Pr.122bis shouldn't expect to fight enemies coming in at all sides.

The secondary armament on the MPK Pr.122bis is two 37 mm 70-K automatic guns. With the two placed in the rear, they provide enough firepower to compensate the 85 mm cannon's inability to attack towards the ship's stern. Carrying a full complement of explosive shells can help take care of any boats and planes trying to attack from the ship's stern.

The Pr. 122bis can be thought of and played as a heavier armed, less manoeuvrable version of the tech tree Pr. 122A or the MPK-163. Make use of the ship's massive armament to pulverize any boats that dare get in your way.

The Pr. 122bis has lacking manoeuvrability, meaning that it isn't particularly effective at rushing to bases or charging into battle. Instead, one good strategy is to find a good piece of cover (i.e. a small island) to protect the ship's more vulnerable central section. If you just leave the ship's bow sticking out, most enemy ships won't be able to damage your main section. This leaves the powerful frontal 85 mm cannon exposed, allowing you to engage enemy ships with ease.

However, this strategy doesn't allow usage of the ship's powerful secondary and AA armament suite, which offers a second gameplay option: serving as a brawler or mid-ranged gunship. This strategy maximizes the Pr. 122bis's high crew count and powerful armament spread across the vessel. When doing so, utilize the ship's powerful 85 mm gun to engage heavier targets (such as the SC-497) and utilize the 37 mm automatic cannons to engage smaller, faster targets. The 37 mm guns are also highly effective against enemy aircraft, capable of destroying most enemy aircraft with a couple of hits at most.

When playing the MPK Pr. 122bis, always stay aware of your surroundings. The ship's lacking manoeuvrability may prevent it from dodging a torpedo if the torpedo isn't noticed early enough. As well, pay attention to enemy ships in the vicinity, particularly heavier-armed vessels such as the SF40 series anti-air ferries. These vessels typically carry numerous hard-hitting automatic guns which will quickly destroy the ship's crew.

The significantly upgraded version of the Project 122 small patrol boats designated Project 122bis MASB has been evaluated by experts as one of the most successful models in its class in the Soviet navy. This version varies from the Project 122 and 122A versions due to its new powertrain, differently-constructed cabin and enhanced anti-air weapons (aft 37 mm autocannons), as well as other improvements. The Soviet navy began employing the RGB-12 rocket-powered bomb against enemy subs in 1953. In later versions, the boats of Project 122bis had bomb launchers mounted on their forward sections for firing these rocket-powered bombs – two rail-type launchers with a constant firing arc that could be aimed horizontally by correcting the ship's course. The Soviet navy used the submarine chasers of Project 122bis until the late 60s, and they also exported them to many other countries.