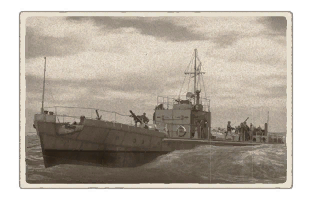 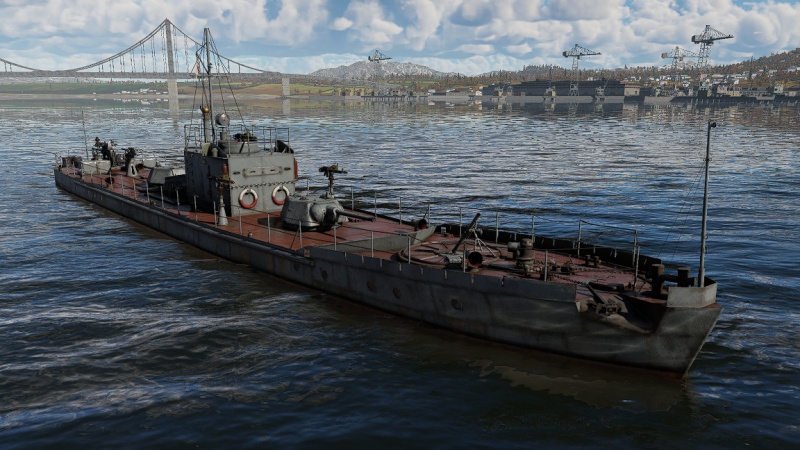 The MBK-161 early modifications is a premium gift rank III Soviet armoured gun boat with a battle rating of 3.3 (AB/RB/SB). It was introduced during Update 1.91 "Night Vision" as a reward for the Operation Shipyard event.

Her compartments, especially the middle section and superstructure, are armoured all around. This means they will remain intact, keeping their crew alive. There are even 30 mm thick plates inside the ship to separate front to middle and rear to middle sections. Ships firing high explosive rounds will only lower your crew to about 20-40%, and not be able to do any damage after that. You will not be brought down by even destroyer's HE salvoes easily. Cannon APHE and aircraft will make short work of you however.

The MBK-161 carries a 37 mm 70-K automatic cannon, with a standard belt of ammunition. It is a good AA armament, delivering powerful hits to enemy aircraft that dare to get close to you. As a secondary armament it also performs great, similar to the one present in the BMO. It is placed at the stern of the ship, so take care to frontal attacks.

Unfortunately, it can only fire at a fixed range of 300 m around the mortar, and the parabolic shot takes around 17 seconds to land. It is pretty difficult to actually hit a moving target, and it does not guarantee to make a perfect shot. As it was developed as an armament against ground forces near rivers, it has no real use in naval battles. It is quite unique, and maybe it can have a role in the future.

The MBK-161 (1943) is quite an interesting ship to play, due to its unique set of characteristics - heavy armament, good armour, and bad manoeuvrability. This ship excels at longer range combat, making full use of its super-heavy main armament, but can also excel at shorter ranges by making use of its massive burst damage output.

The MBK-161 can work very well in certain situations, particularly longer-range engagements. This is because of its great weapons load, namely two 76 mm cannons. While they don't fire particularly fast, they hit very hard and can do a lot of damage to naval targets. Assuming you have decent accuracy, you can easily sink any ships at the MBK-161's BR with a couple of shots. The MBK-161 also carries a sizeable secondary and anti-aircraft armament consisting of one single 45 mm 21-K cannon, one single 37 mm 70-k automatic cannon and three single 12.7 mm DShK machine guns. These weapons give the MBK-161 a highly effective secondary armament, capable of shredding both enemy naval vessels and aircraft. Finally, the MBK-161 does carry a mortar, but this weapon is mostly useless and can only do damage in certain situations, i.e. when an enemy ship hides stationary behind an island.

The MBK Pr. 186 is quite survivable for a ship of its size, with 39 crew members and a sizeable main armour belt consisting of 52 mm of rolled homogeneous armour, making the ship almost impervious to any enemy HE shells under 152 mm and AP shells under 85 mm. This armour covers the ship's machinery and ammo racks, meaning that the MBK-161 is extremely hard to kill with just HE shells. However, the ship's survivability is hampered by the lack of heavy armour at the fore and aft, just 12-18 mm. While thick enough to protect the ship against small-arms fire, this armour is woefully inadequate against any cannon fire. As well, many ships have access to SAP and AP rounds which will easily penetrate and destroy the vessel. Thus, the overall survivability should not be relied upon exclusively, as the ship will be shredded by any heavier weapons carried by larger vessels at its BR, such as early destroyers. The ship should make use of available land cover to protect the vessel from enemy fire and preserve survivability.

Finally, the MBK Pr. 186 suffers from a rather mediocre manoeuvrability, with a poor turning circle and a rather disappointing top speed of 25 km/h in RB. Thus, the ship cannot be relied upon to capture zones, as it will take ages just to get to the capture point. In general, this ship should be played as a longer-range sniper, maximising the use of its powerful armament.

The MBK-161 (1943) class were the first 10 ships built of the MBK-161 class of riverine gunboats. Completed during 1943, they were large and heavily-armoured gunboats designed for use in littoral environments. Built between late 1942 and early 1943, the early members of this class were intended to carry two 82 mm mortars, but were instead armed with a rear-mounted 45 mm gun and a single mortar. The early members of the MBK-161 class saw extensive service in the Baltic during the Second World War in fire support roles, and were eventually retired in the early 1950s.

The MBK-161 was designed with heavy protection in mind - the citadel, turrets and conning tower had armour of varying thicknesses from 52 to 60 mm. The bow and stern were also armoured with plating. However, this armour was detrimental to handling - despite the fitting of two 1,200-hp lend-lease Packard engines, the ship was only capable of making 13 knots (24 km/h). The armament consisted of two 76 mm F-34 guns, the same weapons as the mighty T-34 medium tank. Secondary armament consisted of a single 37 mm 70-K dual-purpose gun and three 12.7 mm DShK machine guns. The ships were intended to carry two 82 mm mortars, but this plan was changed - the 1943 MBK-161s were fitted with a 45 mm cannon in lieu of one of the mortars, while 1944 MBK-161s had both mortars removed and replaced with 45 mm cannon.