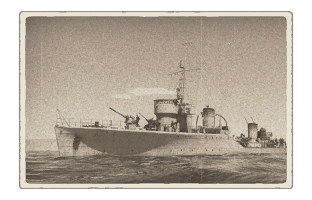 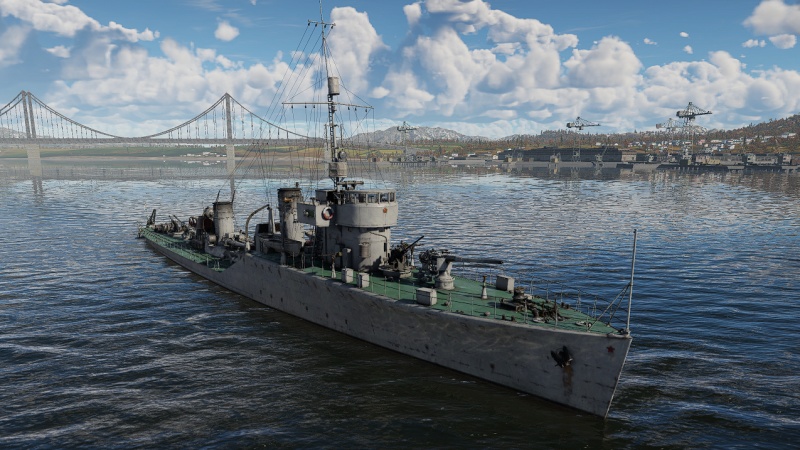 The Uragan-class, SKR Groza is a rank IV Soviet gunboat with a battle rating of 3.0 (AB/RB/SB). It was introduced in Update 1.89 "Imperial Navy".

The Groza has a poor survivability. While she sports a large crew size (but average for a gunboat) and her structure has compartments to mitigate incoming damage, she has very little armour and none on her hull. Any larger-calibre cannons, such as those found on other gunboats and the early destroyers, will easily shred her internal compartments and knock out components. The engines are harder to knock out, however, since they are placed inside the hull on a staggered basis with alternating boiler and engine rooms in pairs. This setup makes it harder for one round to knock out both of her power plants, meaning the Groza usually survives heavy damage with at least partial propulsion remaining. Her crew numbers 114, but many are above deck manning her weapons and are easily whittled down by incoming rounds and any fires that may break out.

The mobility of the Groza leaves much to be desired. She can only manage 21 knots forward and 10 knots in reverse, and the vessel's turn time and rudder shift are very average. The Groza is powered by two three-drum water tube boilers, each driving one propeller shaft. The Groza will never be the first vessel to the battlefield or a capture point but is still fasther than some heavier armoured gunboats.

The Groza is host to 2 x 102 mm Pattern 1911 naval guns, mounted fore and aft. These are among the best cannons to be found on a coastal vessel. They have decent ballistics and are hard-hitting, even against the US destroyers that are slathered with anti-fragmentation armour. Each has a 160-round ammo supply, which will last for quite a while even during constant combat. The guns have a very slow horizontal traverse speed, so planning ahead and turning your guns towards a target before coming within line of sight is imperative.

The stock shell, a base-fused High-explosive round, is arguably the best as it features 2.1 kg of explosive mass and 52 mm base penetration. The only other shell available is a shrapnel round with only 218 g of explosive mass. This round can be useful against PT boats but the improvement is marginal over the HE, and it only has 5 mm of penetration at any angle.

This vessel is equipped with 3 x 37 mm/67 70-K autocannons with a base penetration of 79 mm and powerful HE shells. The available belts are the stock belt (Universal) and the researchable AP and HE belts. The Universal belt is usually the best to use with its good mix of heavy armour-piercing projectiles and powerful high-explosive shells. If you tend to face more PT boats and aircraft, the HE belt will be your go to with the AP belt being more effective against the rarer armoured gunboats and destroyers. One turret is mounted in the front of the ship, between the forward main gun and the bridge. The other two are directly in front of and behind the rear main gun, giving the 37 mm battery complete coverage around the ship. These are your best weapons for combating enemy coastal vessels given their higher rate of fire and better traverse speed than the 102 mm guns.

The anti-aircraft armament of the Groza is lacklustre: she employs two DShK (12.7 mm) heavy machine guns, one on each side of the superstructure. These weapons have a very short engagement range and have relatively small ammo counts, but reload quickly and can be a menace to nearby PT boats.

The Groza has a fully-traversable, triple-tube torpedo launcher at her disposal with 3 x 450 mm 45-36NU torpedoes that can easily cripple destroyers and even cruisers in an uptier with a 284 kg warhead and 41 knots speed. While it is difficult to set up for your own torpedo launches due to her slow speed and the torpedo's limited range, a destroyer or other coastal ship coming around a nearby island or sailing straight is an easy prey.

She is also equipped with 12 x BB-1 depth charges. These are very situational weapons and are only useful if an enemy ship tries to board you. However, on the rare occasion an enemy PT boat tries to hide under your guns these can come in useful.

The Groza is best used as a support vessel for quicker PT boats or better-armoured gunboats. Her 102 mm guns provide excellent ballistics for medium to long range engagements, and the 37 mm battery can effectively combat any coastal vessel she encounters. If she is safe from enemy fire or the enemy is distracted by an ally, the Groza can also be a dangerous threat to any destroyer she faces.

Another method of play is escorting or following allied destroyers. While the Groza cannot keep up with any of them, she can provide far more comprehensive defense against PT boats and aircraft than early destroyers are capable of. This is especially viable when playing in a squad.

The most dangerous vessels the Groza can face are any destroyer, which can usually obliterate her weak hull in one salvo, and any coastal vessel with a large-calibre, fast-firing cannon such as the German 3.7 cm or Allied 40 mm Bofors cannons. These mounts have a sufficient rate of fire to quickly knock out each of the Groza's weapons and compartments and must be dealt with before they get within effective firing range. 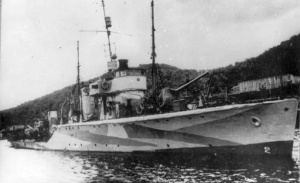 Groza in her wartime paint scheme

The Uragans were assigned to all four Soviet fleets and entered combat in every theater. One of the first actions involved the Metel', carrying wounded soldiers to Vladivostok and escorting three convoys during the Lake Khasan border conflict with Japan. During World War II, the Uragans played an active part in the campaigns around Leningrad by providing fire support to Soviet ground troops. In the Black Sea, they played an active role in escorting convoys and providing fire support to encircled Red Army ports such as Sevastopol. In the final days of the war, two of the vessels also supported amphibious landings in Korea and an Sakhalin Island.

Very little information is available about the class after World War 2. Reportedly, most became training ships and were scrapped during the 1950s.