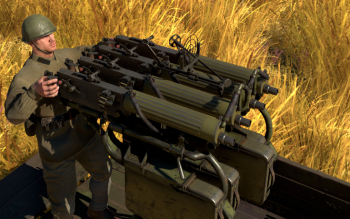 The Pulemyot Maxima PM1910, better known as the "Maxim", is a water-cooled 7.62x54R mm machine gun built in the Russian Empire in 1910, based on the British Maxim machine gun.

BESA- the British's vehicle-mounted machine gun, they share the same rate of fire but the BESA has better penetration at longer ranges.

The Maxim in-game is in the form of the ZPU (aka 4M) quad mount which gives 4 barrels at its disposal. Although the animation for the gunner might be hilarious at first glance, he certainly fulfils his role - hunting down careless planes or clearing out exposed crew of vehicles. Thanks to the quad mount, the total rpm can go up to 2400 rpm, for those aircraft that fly too low or too slow, a few seconds worth of bullets can certainly ruin their day by either setting their engines on fire or straight up being "cut" by the pools of bullets. In cases of an enemy with exposed crew, the last thing they can hear is the sound of tons of bullets flying onto them, making it very effective hunting down rivals with exposed crew.

But do remember that there is nothing around the gunner (other than the gun itself) to protect him from even enemies' coaxial machine guns or aircraft guns, so take cover at all costs to prevent quick demise; suddenly surprising the enemies and quickly driving away is the key to success. And do not expect a 7.62 machine gun to take down any armoured vehicles with 10 mm of armour or more.

After the Russian Empire imported units of Maxim machine gun for the Russo-Japanese War in 1904, the army was very pleased with its firepower to wipe out floods of enemies; later in 1905, Imperial Tula Arms Plant started their reverse-engineering on it as the PM 1905. With some revision made in the next few years, the new PM1910 was passed for service, featuring its signature gun shield and a multi-purpose sledge (which also serve as a gun mount) designed by A. A. Sokolov.

The new gun then served in the Russian Empire through WWI and October Revolution, sometimes in the forms of a Tachanka (a horse-pulled cart with a machine gun), then in the Soviet Union during the Winter Wars and WWII, sometimes in a quad ZPU/4M mount, until it was replaced by lighter machine guns like SG-43 with same calibre. The decommissioned guns were also sold or given to allies in Eastern Europe or Asia, where both China and North Korea used them extensively throughout the 1940s to 1950s. The reliability of the gun is proven by the fact that they are still occasionally used by various forces to this day.