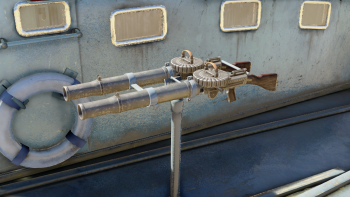 One of the most recognisable light machine guns of World War I with its pan magazine and large barrel cooling shroud, the Lewis Gun was a commonly used weapon by the British Army, though the gun itself was designed by an American. Colonel Issac Newton Lewis, a United States Army Officer in the Coastal Artillery Corps, developed a gun for the Army in 1911. However, the gun was not adopted by the Army for reasons that remain unclear but are commonly attributed to a political rivalry between Lewis and the Chief of the Ordnance Department, General William Crozier. Regardless of the reason it was rejected, Lewis resigned from the US Army and moved to Belgium in 1913 where he set up his own company to manufacture the design and began working with Birmingham Small Arms in Britain to refine it. The end result was the Lewis M1914 which was adopted for the British Army in 1915 as a replacement for the heavier Vickers gun for the infantry on the Western Front. The Lewis 1916 was a variant produced by the American company Savage Arms for export to Canada and the UK though when America entered the war in 1917, the Navy would also use some of the Savage Arms Lewis guns.

In the British Army, a Lewis gun was used in a seven-man team with the main gunner, an assistant gunner who carried spare parts, and five more men who carried additional pan magazines. Each man was fully qualified to fire the machine gun and repair it. The gun was both faster to build and more portable than the Vickers making it a valuable addition to the British Army. It was notably an early tank machine gun being mounted on the Mark IV tanks for its pan magazine that was better suited for the confined spaces of a tank than a belt gun like the Vickers or Hotchkiss. However, the barrel shroud presented a problem as it brought the hot air and fumes from the engine back inside the tank and into the gunner's face. The Mark V would switch to the Hotchkiss which got an improved belt feed. The Germans had a healthy respect for the Lewis which they dubbed the "Belgian Rattlesnake" for its use against German raiding parties. The Russians also used the Lewis gun ordering 10,000 each from both the British Army and Savage Arms though only about 5,000 were delivered by the latter due to the United States' reluctance to supply the guns to Tsarist Russia. More Lewis guns would be contributed by the British to the anti-communist White Russians in the northwest between 1918 and 1919.

By the time of World War II, the Lewis gun had been replaced in service by the Bren gun in the British Army. However, the British Army lost a massive amount of equipment after the Evacuation of Dunkirk in June 1940, so 58,983 guns were taken out of storage and refitted to serve in a number of roles. The Lewis Gun was primarily issued to the Home Guard to defend Britain against a potential invasion by Germany and it was also used issued as an airfield defense and anti-aircraft gun. In this role, the Lewis was often used with the distinctive barrel-cooling shroud removed as it was found to be unnecessary. The anti-aircraft Lewis guns were credited with shooting down more low-flying aircraft than any other weapon in the British inventory.

While both the British Army and Royal Air Force had mostly replaced the Lewis Gun by the time World War II began, the Royal Navy had continued to use it as their standard short-range air-defense gun used on everything from their primary warships to armed trawlers like HMS Liscomb, armed merchant ships, submarines, corvettes and the MTBs or Motor Torpedo Boats of the Royal Navy. The 20 mm/70 Oerlikon Mk.II mostly replaced the Lewis Gun in these roles but they were still being fitted as late as 1942 and were used in the air-sea rescue ships of the RAF's Marine Craft Section. The guns were finally withdrawn from service in 1946.