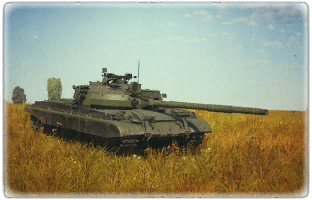 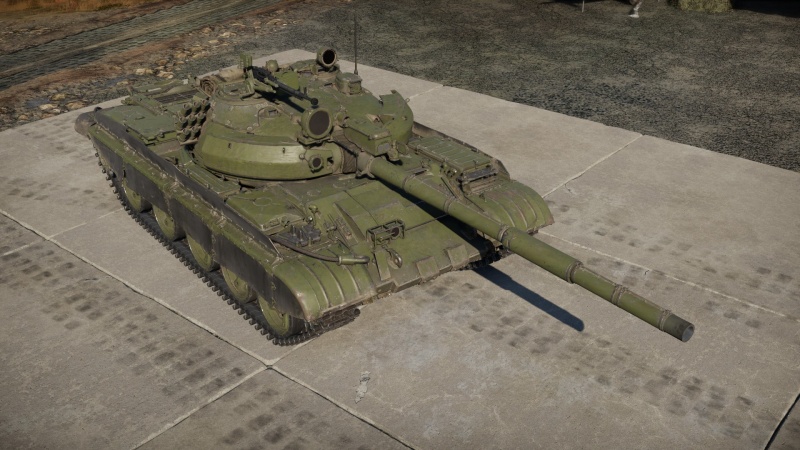 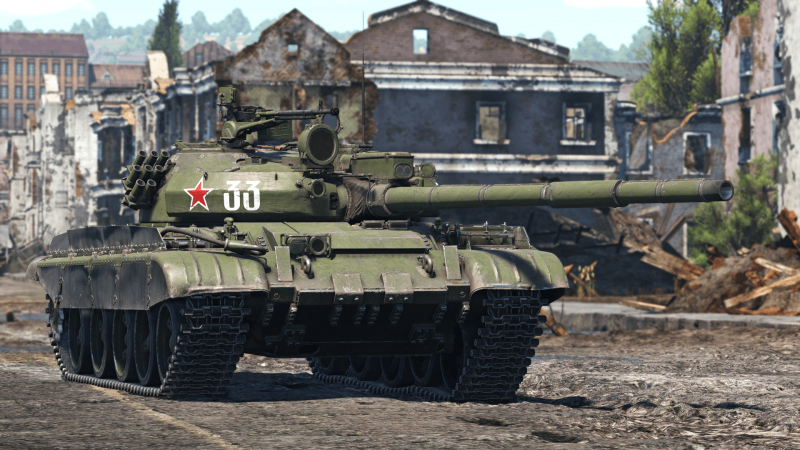 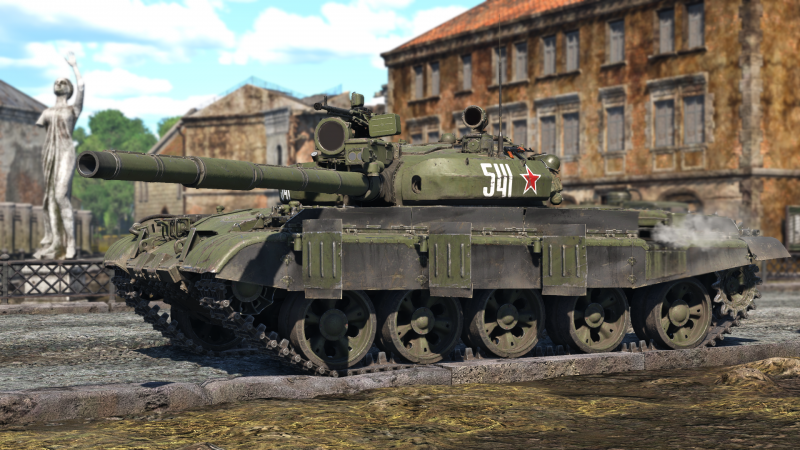 A modernized version of the famous T-62, the T-62M-1 chiefly features improved firepower, fire control, and protection in a similar manner to the T-55AM-1. The hull and turret feature add-on composite armour, including the conspicuous "brow" arrays on the turret cheeks. The gun is now equipped with a thermal sleeve and can fire improved APFSDS, HEATFS and HE shells in addition to a potent ATGM. A laser rangefinder is mounted in a large box above the gun barrel, smoke grenade launchers are added to the turret side, and a more powerful engine has been installed to compensate for the increased weight of all these new features. Though the T-62M-1's gun handling and speed are still inferior to most of its competitors, it has many tools at its disposal and can be a formidable opponent despite its old chassis and somewhat crude nature.

The T-62M-1 has very similar armour to the T-55AM-1, having similar composite add-on armour. The turret cheeks are protected by large curved composite blocks, sometimes historically referred to as "Brezhnev's Eyebrows" due to their appearance. The turret's effective thickness through the composite overlay is 200 to 350 mm thick in this area, whether for kinetic or chemical rounds. The brow's composite armour does not entirely cover the turret, whose uncovered areas have an even lesser armour thickness: the sectors closer to the gun are not backed by metal-polymer layers and only the outer steel provides extra protection. It can help to point the turret slightly away from opponents to reduce the chances of getting hit in the non-composite zones.

The hull protection is less, although still relevant. The hull composite will stop APDS and HEAT rounds from the 105 mm L7 gun, but any more powerful rounds will penetrate. The hull sides are relatively well protected. 80 mm RHA will stop most autocannon rounds, and the composite skirts as well as flaps can stop HEAT rounds at an angle.

Frontal weak points include the cannon breech area, as it is not covered by the add-on composite. Additionally the lower front plate is not protected by composite. These areas are easy to penetrate. The hull sides also are only 20 mm near the bottom, which is a weakness that can be exploited by autocannons. That said, there is essentially nothing important in those areas. The rear armour is not worth mentioning, as it will not stop anything larger than a heavy machine gun.

Side flaps similar to those used on the T-64A (1971) can be equipped on the T-62M-1 with an unlockable modification. They add 30 kg of mass to the tank, which is a negligible penalty, and help to block HEATFS projectiles and ATGMs from side-aspect shots. Each flap will fall off after being hit, so do not count on being able to body-block an entire barrage of chemical rounds.

The T-62M-1 also has wet ammunition storage bins. 16 rounds are placed within the fuel tank located beside the driver, acting as a spaced armour, protecting the ammunition from HEAT. Successive HEAT shots might still detonate the ammunition. Note that APFSDS can detonate the rounds with ease, so avoid being shot in the hull if possible.

APFSDS rounds should be the primary ammo choice for the T-62M-1, but its selection of three types of chemical rounds should not be overlooked either. 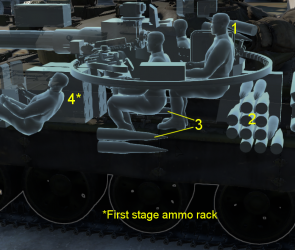 The T-62M-1 should be played like other high tier Soviet MBTs, though with an higher emphasis on range and cover. Hide your hull and use your almost impenetrable turret armour to deflect hostile fire. If possible, try to use cover to conceal your cannon breech, as a well-placed APFSDS can disable your cannon and, depending on which side of tank you were hit from, kill your gunner or loader. A turret penetration may result in a knock out by a single shot if it hits your ammo. Do not allow yourself to fall into close-range combat areas if at all possible.

Those who have fought and/or used the T-55AM-1 will find the same tactics and assumptions work against the T-62M-1, as well. It performs similarly, mostly just having upgraded the strengths the T-55AM-1 is known for; the turret armour is even better, and the power of the variety of rounds these tanks are known for has been increased, thanks to the increased calibre of the cannon (from 100 mm on the T-55AM-1 to 115 mm on the T-62M-1). This allows the T-62M-1 to have ways of dealing with vehicles all the way up to 9.7.

Thanks to the incredible turret armour, and highly effective and varied ammunition choices, the T-62M-1 is highly suited for a long-range sniping and support role. Players of tanks such as the Chieftain will have an idea of the playstyle. Use your fast and powerful APFSDS rounds to quickly disable targets travelling quickly at ranges out to several kilometres, use your potent HEATFS to dispatch targets at closer ranges, or fire the breech-loaded ATGM for highly accurate shots against exposed targets, both ground and air (especially against helicopters).

Beware of fast MBTs like the Leopard A1A1, as their mobility allows them to easily flank you and get a shot into your weaker side armour. The T-62M-1 is currently unlikely to face many tanks capable of penetrating its turret composite armour. The majority of deaths will likely result from being shot through weak spots or from flanking, so avoiding these should be your primary concern.

Your tank also has a large amount of weak spots from even the slightest angle above you, so make sure you take enemy helicopters seriously and deal with them as fast as possible. Your gun elevation isn't the greatest, so make sure you use terrain to help lift your gun as well as present thicker armour profiles.

The T-62M-1's core strengths lie in the frontal armour and versatile ammunition choices. Do not attempt to out-snipe a T-62M-1 in anything short of a hull-down British MBT. Instead, abuse the T-62M-1's inferior mobility to out-flank it and quickly disable the gun. At closer ranges with higher penetration shells (260+ mm penetration, chemical or kinetic), shooting the cannon breech can also serve to turn the T-62M-1 into an easy kill.

If you're engaging a wary T-62M-1 at closer ranges, try to bait out a shot or wait until he fires. The T-62M-1, depending on crew skills, has a reload of up to 12 seconds, giving a smart opponent plenty of time to take out a T-62M-1 after he fires. Using smoke to hide a quick change in your position can also work well, as both the T-62M-1 itself and its turret turn slowly compared to vehicles it will face, giving you time to drive around it in the confusion. You can also fire at the lower glacis to knock out the driver and gunner.