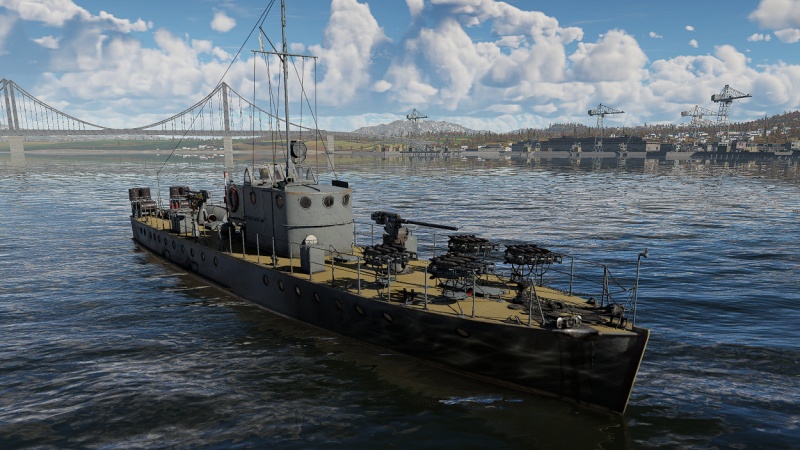 The MO-4 Type is a rank I Soviet motor gun boat with a battle rating of 1.0 (AB/RB/SB). It was introduced during Update 1.79 "Project X" when the Soviet fleet was implemented into the game. MO stands for Malyj Okhotnik, Russian for "Small Hunter".

The MO-4 has dangerous long-range firepower at a very low battle rating, but limited defense against fast and evasive enemies and air power. Accordingly, the MO-4 should fight conservatively at the longest possible range the crew's gunnery skill could reach. At this battle rating, very few opponents will have large-calibre guns that can compete at range, and even fewer players will be able to target them effectively, so use that to the ship's advantage.

The MO-4 was the 4th development of the MO class of guard ships, following the MO-1, MO-2 and MO-3 classes. However, in terms of production size, it dwarfed the previous classes, with roughly 250 ships produced compared to roughly 40 ships of the previous three classes. The MO-4s sported a main armament of two 45 mm 21-K cannons, one each mounted fore and aft of the bridge. As well, the ship carried two single DShK heavy machine guns. The MO-4 class subchasers were not fitted with torpedo armament, but rather, depth charges for it’s anti-submarine role.

The MO-4 class of sub chasers saw extensive duty during the Second World War, not only in its anti-submarine role but in various other roles as well. The ships were designed to be small and versatile, and as such, they were used for a variety of purposes including convoy escort and landing support. Two MO type sub chasers (MO-103 and MO-144) sank one U-Boat each, while other MO-4 boats destroyed small surface ships and aircraft. The MO-4 class would also lend it’s design to the later BMO (the B standing for “armoured”), of which 66 were produced in 1945.