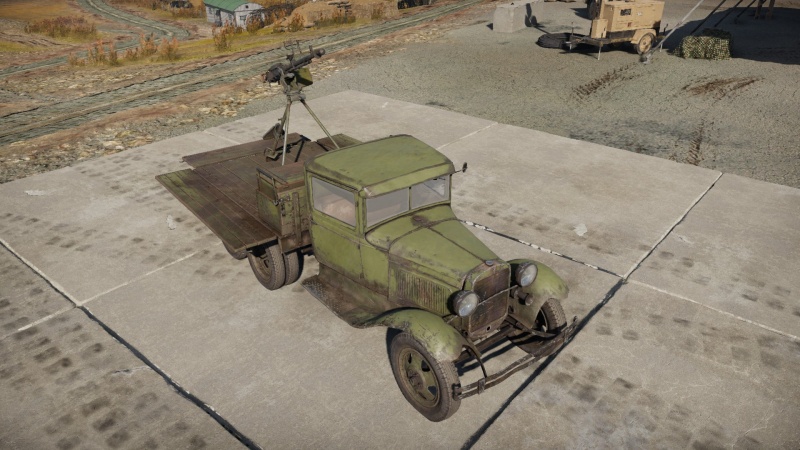 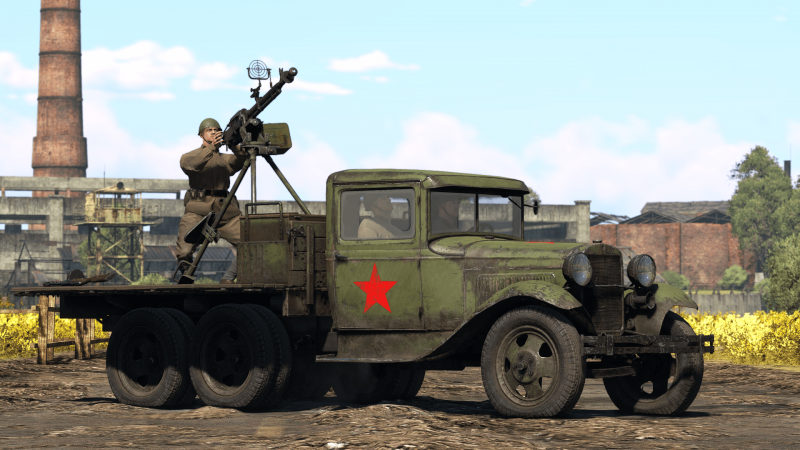 Although the GAZ-AAA (DShK) continues to use the same unarmoured but nimble platform as its predecessor, the change in armament allows it to do more damage per shot against aircraft opponents as well as having a change at killing lightly armoured vehicles that are common at such BR. However the change in armament also represents a decrease volume of fire as well as an increase in reload and a smaller magazine, all of which makes it all the harder to hit enemy planes as well as requiring more rigorous aiming when it comes to attacking lightly armoured vehicles. While the GAZ-AAA (DShK) can penetrate targets, it still is not recommended to rush into battles due to the lack of protection of the vehicle and the mediocre penetration. The vehicle is better suited for ambushing unexpected targets and hit and run tactics. One must note however that unlike the GAZ-AAA (4M), the GAZ-AAA (DShK) cannot fully traverse its gun due to the ammo box located next to the driver's cabin.

This vehicle lacks any form of armour. Any light machine gun can penetrate the vehicle and knock out the crew (the gunner is completely exposed). Artillery strikes, bombs and rockets can cause critical damage even if they land far away from the vehicle.

The only benefit of being so light is that enemies using APHE rounds will often overpenetrate and not detonate. However, it is very easy to destroy this vehicle with high-explosive shells through the overpressure mechanic (and at this BR, many guns are equipped with such shells).

The mobility of the GAZ-AAA (DShK) is mediocre at best. Similar to the preceding GAZ-AAA (4M), the GAZ-AAA (DShK) does reach an impressive ~40 km/h on hard surfaces (e.g. grass, dirt, concrete, etc), and is quite agile in turning. The acceleration on these surfaces is average. These pros, however, are outweighed by cons such as the poor brakes. It takes around a whopping 4 seconds to reach a complete stop which is a disadvantage in cramped conditions like urban environments, causing it to drive over desired cover or to bump into walls/teammates. It also has very poor reverse speed of only -5 km/h, putting the player at great risk when needing to retreat back to safety. Due to the low engine power, it is hard or impossible to crush obstacles like stone fences or light poles which further limits its mobility in an urban battlefield. Finally, just like most other wheeled vehicles, it shares the poor mobility on soft terrain like mud and sand, especially when accelerating, making itself an easy target for strafing aircraft.

For anti-air duties, the GAZ-AAA (DShK) is harder to use than the previous SPAA despite having a more powerful gun. The 12.7 mm MG traverses very slowly for an SPAA, has a limited elevation angle and cannot aim backwards. These limitations severely impact the anti-air capability since the player have to constantly adjust the hull position just to get the gun on target. The best way to use this SPAA is to lure enemy planes into head-ons since little to no lead is required, compensating your low fire density and fire rate. First find yourself a solid cover, hide the driving compartment behind it and expose only the gunner. As an enemy plane nears, fire single shots towards it to draw its attention. If it starts to dive on you, open fire immediately, aim slightly up between the top of its fuselage and the tip of the vertical stabiliser. If the gunner is not knocked out, unload the entire box of ammo to the target. As you reload it might just be turning back for another pass, try crippling it more with another box of bullets. A few hits from the DShK should badly damage a fighter (e.g. He 112) around this BR, however a bomber/attacker (e.g. Do 17 Z, Ju 87) is generally more durable and can take more hits. If you see or hear a bomb falling from the plane, immediately hide behind cover, as even the smallest fragment can easily kill your poorly protected crew, or damage your tires or your engine.

The Second most sophisticated Weapon System In Game - PhlyDaily