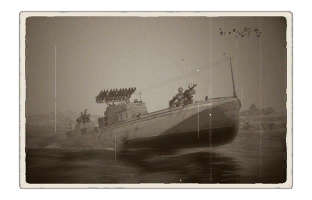 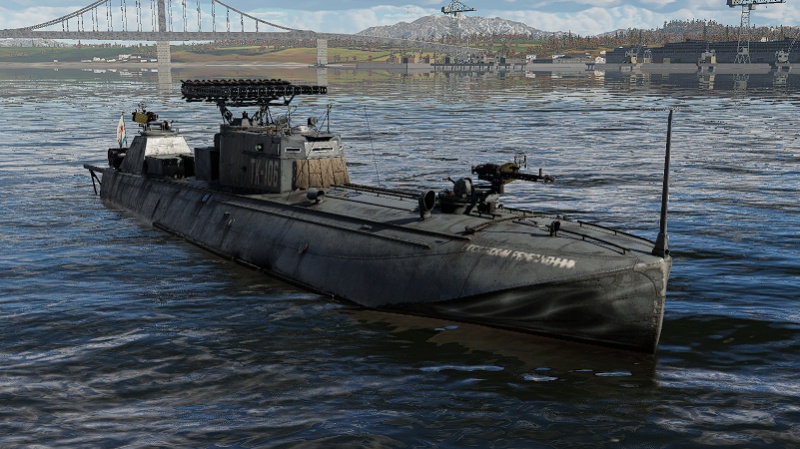 The G-5 Type XI-bis TKA 106 is a premium gift rank I Soviet motor gun boat with a battle rating of 1.7 (AB/RB/SB). It was introduced during Update 1.97 "Viking Fury" as a reward for the Victory Day event.

As with the regular G-5, the TKA-106 has practically no survivability. The ship has a tiny crew count of just six crew members and no armour, meaning that a couple of machine gun hits can knock the vessel out. The ships vital components are all clustered close together, making them vulnerable to damage.

The TKA-106 is an extremely mobile vessel. It can reach a top speed of 107 km/h in realistic mode and 138 km/h in arcade, making it one of the fastest vessels in the game, even faster than its predecessor. The TKA-106 also benefits from a fast acceleration to its top speed. The ships turn time is quite fast, though keep in mind that sustained turns will result in much of the ship's speed being bled away.

The TKA-106 carries a pair of DShK machine guns as its main armament . The 12.7 mm DShK machine gun is a heavy machine gun, similar to the M2 Browning used by the Americans and the Vickers guns used by the British. This gun fires from a fixed 50-round magazine and will need to be reloaded after the magazine is expended. The DShK isn't a particularly high-damaging weapon and drops off in effectiveness past 1.5 km. However, it is still quite effective when use against small coastal vessels. The TKA-106 gets access to three ammunition belts: Universal, HE, and AP. Of these belts, the HE belt is most effective against smaller vessels and aircraft.

The TKA-106 gets access to 48 M-8 rockets, with 24 mounted in a trainable launcher and 24 more in a quick-reload magazine. The M-8 rocket is quite adequate for damaging larger targets and are quite easy to aim. However, these rockets are less lethal than some comparable munitions, due to their lower calibre and small TNT warhead (0.6 kg). As a result, it is advisable to salvo-fire the M-8s against large targets in order to ensure their destruction quickly and easily.

When playing very vulnerable ships like the TKA-106 you should adopt a hit-and-run tactic. Move towards the enemy while hiding behind cover (islands or obstacles) then strike with speed and retreat back to cover. You can use your 2 x 12,7 mm DShK machine guns against smaller enemies like MTBs and your rockets against bigger enemies like sub-chasers. The hit-and-run tactic works in every game mode.

The G-5 torpedo boats became the most common small vessel of this kind in the Soviet fleet during WWII. At the end of 1942, an experimental series of artillery boats was built, in which torpedo equipment was replaced with rocket launchers. During the tests, the project was recognized as successful and all 6 experimental boats were included in the second brigade of torpedo boats in the Black Sea Fleet.