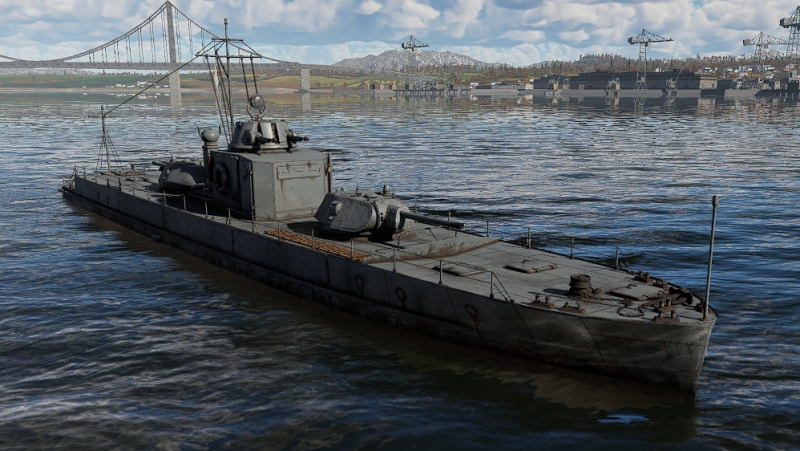 The Pr.1124 early modification is a rank II Soviet armoured gun boat with a battle rating of 2.0 (AB/RB/SB). It was introduced during Update 1.79 "Project X" when the Soviet fleet was implemented into the game.

The Pr. 1124 (1940) isn't particularly nimble for its size. It has a top speed of 39 km/h in RB and slightly higher in AB, which makes it relatively fast for a gunboat but still very slow compared to the MTBs that it often faces. The ship's turning circle is also rather weak, and the rudder isn't very responsive.

The Pr.1124 is equipped with two 76mm T-34 turrets, essentially using the same guns as used on the T-34 tank. These guns are fairly large for this BR, but they require a different strategy than a typical torpedo boat owing to it having a decent reload time. You cannot just spray bullets with this ship; you must aim for certain modules with a greater precision than if you could just use a machine gun. When a good hit occurs, it usually causes a considerable amount of damage for the opposing ship, and may even cause hull breaks against smaller ships. HE is the recommended ammo for this gun as most ships at this BR have low to no armour and are vulnerable to explosives.

The Pr. 1124 (1940) is quite an interesting ship to play, due to its unique set of characteristics - heavy armament, good armour, and bad manoeuvrability. This ship excels at longer range combat, making full use of its super-heavy main armament.

The Pr. 1124 can work very well in certain situations, particularly longer-range engagements. This is because of its two 76 mm main cannons. While they don't fire particularly fast, they hit very hard and can do a lot of damage to naval targets. Assuming you have decent accuracy, you can easily sink any ships at the Pr. 1124's BR with a couple of shots. The Pr. 1124 also carries a single dual 12.7 mm DShK machine gun turret which provides some measure of anti-aircraft defence. Note that the anti-aircraft armament is otherwise bare, meaning that the ship is very poorly defended from aerial threats.

The Pr. 1124 is quite survivable for a ship of its size, with 20 crew members and some anti-fragmentation armour on the hull which can provide a limited measure of protection against small arms fire. However, the ship's survivability should not be relied upon as the ship will be shredded by any heavier weapons carried by larger vessels at its BR. The ship should make use of available land cover to protect the vessel from enemy fire and preserve survivability.

Finally, the Pr. 1124 suffers from a rather mediocre manoeuvrability, with a poor turning circle and a rather disappointing top speed of 39 km/h in RB. Thus, the ship cannot be relied upon to capture zones, as it will take ages just to get to the capture point. In general, this ship should be played as a longer-range sniper, maximising the use of its powerful armament.