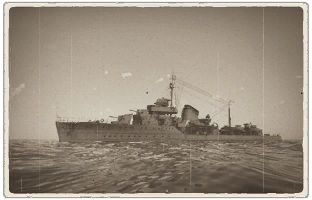 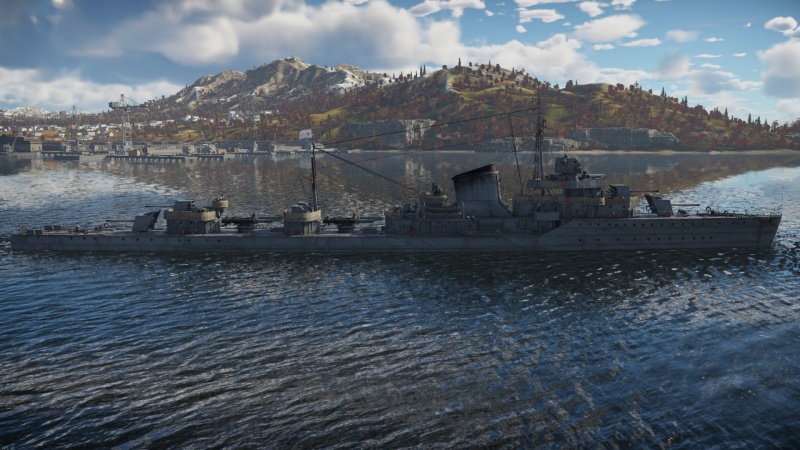 The Besposhchadny has very little armour, as is typical for destroyers—the only armoured areas of the ship are the 13 mm and 8 mm gun shields of the 130 mm and 76 mm guns respectively. HE shells will have no difficulty destroying the guns and anti-aircraft cannons scattered about the deck of the Besposhchadny.

In short, the Besposhchadny is very poorly protected, even for destroyer standards, and is very vulnerable to ammunition storage detonation.

The primary armament of the Besposhchadny comes in the form of four single-mount 130 mm B-13 guns, with two guns fore of the superstructure and two guns in the aft of the ship, an armament quite similar to most Soviet destroyers built before the conclusion of the Second World War. These guns are an upgrade over the 102 mm Pattern 1911 guns of the Frunze and Fidonisy-class Kerch, although it is worth keeping in mind that not every statistic of the 130 mm guns is superior to that of the 102 mms.

The main advantage of the 130 mm B-13 guns over similar weapons is their ammunition. While the calibre of the guns is slightly larger than 127 mm, the most common calibre of destroyer main armaments, the explosive filler and thus damage of the 130 mm B-13 far exceeds contemporary rounds. In addition to this, the shells fired by the B-13 guns have quite good ballistic properties thanks to their weight and high muzzle velocity.

The HE carries an explosive charge of 3.58 kg of TNT, and is more than competent at disabling external and unarmoured components of other destroyers as well as dealing massive structural damage to coastal vessels. The shell compares favourably to the HE found on the vaunted American 5"/38 gun, which has an explosive equivalency of 3.22 kg of TNT in a 127 mm calibre shell. This high filler is not exceeded by any other destroyer-calibre HE shells at a similar battle rating, although the OF-46 HE is still not massively better than competing HE shells of other guns and nations.

The more distinctly powerful shell is the SAPBC of the B-13, which has an explosive charge of 2.35 kg of TNT. This is more than twice the explosive filler of the analogous and very competent 5" Common Mk.32 shell of the 5"/38. The explosive filler of the SAP shells allows the Besposhchadny to deal massive damage to internal components and crew compartments with each salvo. On top of that, the 130 mm PB-46A has a greater penetration than the SP Common shell of the 5"/38 gun, which enables the combating of even cruisers and their additional armour.

To round the shell choices off, the HE-VT shell provides a semblance of air defense capability through the B-13, although this role isn't very well filled by the Besposhchadny due to limitations of the single mounts installed.

There are two 76 mm 39-K guns in single mounts on the Besposhchadny on a pedestal between the torpedo launchers of the ship. Although there are some angles that allow the two 76 mm guns to fire at a single target, most typically only one gun will be able to fire at a target. Similarly to the main armament, the 76 mm guns have poor rotation speeds, although the maximum elevation is increased to 85°. Their performance is mediocre against surface targets due to low number of guns as well as the small calibre, which inhibits the damage potential of the shells fired. That being said, the 39-K guns do have a good rate of fire at 27 rounds per minute.

The HE is competent at dealing with coastal vessels and damaging unarmoured components of bluewater vessels; an explosive filler of 483 grams of TNT provides satisfactory damage for the relatively small shell. In spite of this, the HE will still struggle against larger and more armoured targets.

While the HE-TF may appear attractive as an anti-aircraft shell in conjunction with the high elevation angle of the mount, the HE-TF shell carries significantly less explosive filler than the HE and is thus less useful even with the more versatile fuze installed.

The final shell choice is the APHEBC which may penetrate targets to deal internal damage. While the APHEBC has good penetration for its calibre, the light explosive filler limits the capability of the shell.

There are a total of six 533 mm 53-38 torpedoes on the Besposhchadny, split between two triple torpedo launcher mounts. While not exceptional, these torpedoes are competent with a punchy filler of 300 kilograms of TNT and modest speed of 82 km/h; the 53-38 torpedoes are an explicit upgrade from the 45-36NU torpedoes of the Frunze.

With the characteristics of the Besposhchadny in mind, the ship is best kept to a backline role in which the Besposhchadny maintains distance from the opponent in order to mitigate damage to the delicate ship. Playing as a brawler and getting up close to enemy destroyers allows the opposition to easily incapacitate and destroy the Besposhchadny thanks to its exposed ammunition racks and lack of armour. At range this disadvantage is still present, but range will make it more difficult to hit the ammo racks of the Besposhchadny. Moreover, the slow traverse speeds and slow reload of the anti-surface guns of the Besposhchadny limits the ability of the ship to deal with close targets and especially nimble and sneaky coastal vessels that may attempt to prey on the unwieldy destroyer.

Thankfully, the main armament of the ship allows for medium-to-long range combat with its good ballistic properties and punchy explosive filler. The B-13 guns of the Besposhchadny are more than capable of whittling down destroyers at range, and may even cause ammunition stowage detonations if properly aimed.

The Besposhchadny was a destroyer of the Project 7, Gnevny-class, commissioned on the 2nd of October 1939. The Project 7 destroyers were intended to function as cheaper and more numerous traditional destroyers that were led by the larger and more expensive Project 1, Leningrad-class destroyer leaders. This plan was inhibited by the lack of experience that the Soviet Navy had with designing and building modern (for the time) destroyers. Cognizant of this limitation, the Soviet Navy consulted more experienced Italian shipbuilders in order to overcome their inexperience. The Soviets purchased plans for the Italian Folgore-class destroyers as a base for what would become the Gnevny-class.