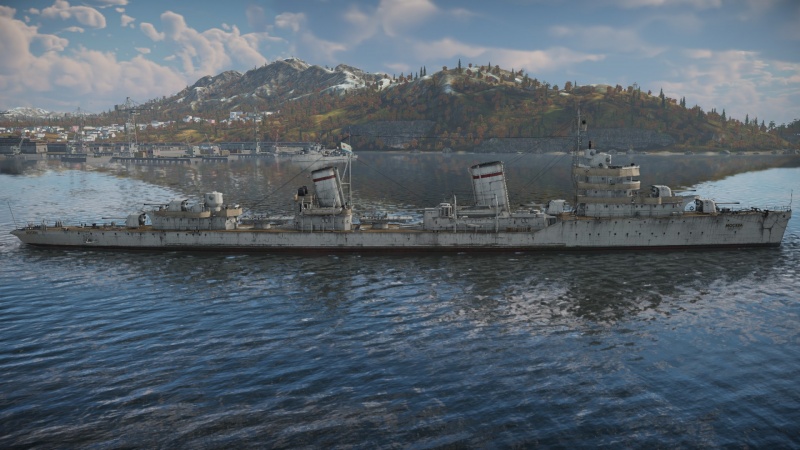 The Moskva has great survivability for a destroyer, given that it is a destroyer leader. First, the ship has a crew count of 323 crew members, comparable to the American Sumner or German Type 1936-class destroyers. The ship's ammunition racks and transmission are all located well below the waterline, decreasing the chance that they are hit. However, the Moskva's engines are partly above water and can be knocked out quite easily.

As with many WWII-era Soviet destroyers, the Moskva enjoys great mobility, particularly its top speed: 80 km/h in realistic and 107 km/h in arcade. In fact, the Moskva is the fastest destroyer in the game, jointly with its sister ship Leningrad. However, Moskva's acceleration, turn time and rudder shift are mediocre among ships of its class.

The Moskva is an interesting ship to play, with a quirky set of characteristics. It has a high top speed making it good for base-capturing, but its main guns are most effective at longer ranges due to their fast velocity and high damage. As a result, the Moskva can be played as an aggressive flanker / base-capturer, or alternatively, as a sniper.

The Moskva's decent survivability and good top speed make it well-suited for rushing to capture bases; the ship can also flank enemies effectively due to the aforementioned characteristics. However, when doing so, be extremely aware of your surroundings: rushing forward will lead to enemy ships focusing on you, and despite your decent survivability, you will be outgunned and destroyed by heavily-armed destroyers such as the Sumner. This is compounded by the fact that your engines are relatively exposed, meaning that an initial enemy salvo may disable your engines and leave you dead in the water. As a result, island cover is key to playing the Moskva effectively. Use ground cover to prevent enemies from hitting you, until you are directly on their flank and/or capturing a base.

On the other hand, the Moskva's main armament lends itself well to sniping. The 130 mm B-13 cannon has decent accuracy, great muzzle velocity (870 m/s), and good damage, meaning that it is better used at longer ranges (7+ km) where you can more effectively damage enemy destroyers. This also mitigates the cannons' main flaws: slow traverse and a mediocre reload speed. At close range, you will be outgunned by American & German destroyers, who generally benefit from faster reloads, and consequently, higher DPS. Either way, make good use of island cover to preserve your survivability.

Finally, the Moskva's secondary armament is rather lacklustre, meaning that you will have to rely on allied destroyers for protection against enemy aircraft. The 76 mm cannons are decent against enemy coastal vessels but ineffective against aircraft, particularly because they lack a proximity-fuse (HE-VT) shell. Aside from the two 76's, the Moskva only has eight DShK machine guns, which are effectively useless past 2 km. Thus, stay near friendly vessels, as they can provide you with adequate anti-air cover.