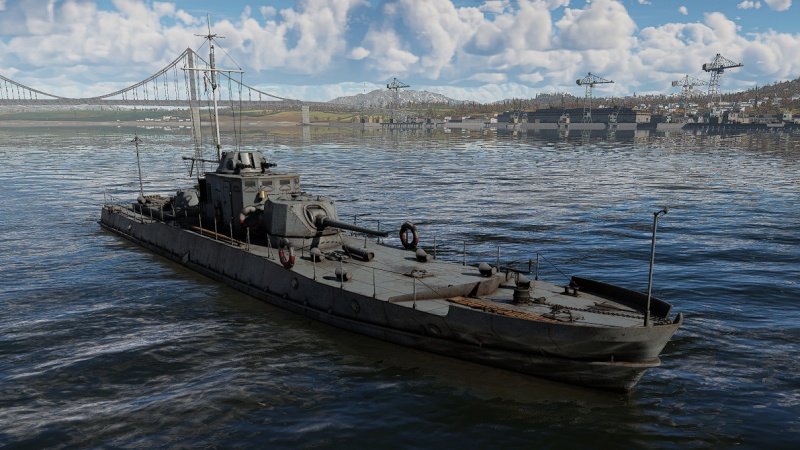 In general, the Pr. 191 has pretty bad mobility. The ship has a max speed of 29 km/h spaded in RB, which is slow even for Soviet armoured gun boats. As well, the ship isn't too responsive and doesn't have a great turning circle. All in all, the ship should not rely on its mobility due to its poor turn and speed capabilities.

This ship comes with 10 MIRAB mines. They are rather small, and should be used only against corvette and smaller sized ships Several hits may sink a destroyer from flooding. The best use for these mines is to lay them at a capture point and hope that an enemy ship runs over the mine and gets blown up; however, it may be the best option to simply not carry them at all, as they do pose a risk of detonating when hit.

The Pr. 191 is quite an interesting ship to play, due to its unique set of characteristics - heavy armament, good armour, and bad manoeuvrability. This ship excels at longer range combat, making full use of its super-heavy main armament.

The Pr. 191 can work very well in certain situations, particularly longer-range engagements. This is because of its great weapons load, namely the 85 mm cannon mounted in front of the bridge. Assuming that you have decent accuracy, you can easily sink enemy vessels with a few hits. The Pr. 191 also carries two dual 12.7 mm DShK machine gun turrets which provide a surprisingly good measure of anti-aircraft and anti-MTB defence. Note that the anti-aircraft armament is otherwise bare, meaning that the ship is very poorly defended from aerial threats at longer ranges where the DShKs are less effective.

The Pr. 191 is rather lacking in survivability compared to some of its peers. The ship has a crew of 14 sailors, which isn't particularly impressive for a Soviet armoured gun boat. As well, the Pr. 191 lacks heavy armour, with 30 mm protecting the turret and just 7 mm of hull armour. This means that the ship can, and will, be shredded by any enemy cannon fire. As a result, captains should make use of island cover to maximise survivability. One additional good strategy is to stay bow-in on the enemy at longer ranges. This prevents enemies from hitting all three of the ship's sections at once, which greatly reduces the risk of being shredded.

Finally, the Pr. 191 suffers from a rather mediocre manoeuvrability, with a poor turning circle and a rather disappointing top speed of 29 km/h in RB. Thus, the ship cannot be relied upon to capture zones, as it will take ages just to get to the capture point. In general, this ship should be played as a longer-range sniper, maximising the use of its powerful armament.