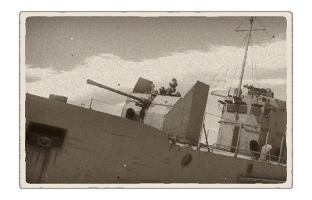 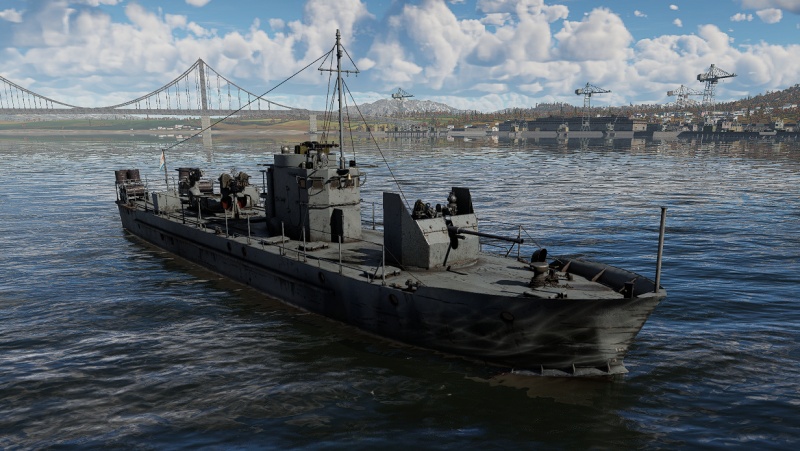 The BMO pr 194 is a rank IV Soviet armoured gun boat with a battle rating of 3.0 (AB/RB/SB). It was introduced during Update 1.79 "Project X" when the Soviet fleet was implemented into the game. BMO stands for Russian: бронированный Mалый Охотник, Bronirovannyj Malyj Okhotnik; English: Small Armoured Hunter.

The anti-air armaments consist of a total of four 12.7 mm machine guns (2 x AN-M2; 2 x DShK). These guns should be primarily against the aircraft, but they can also be used against the lightly armoured boats. The guns are positioned in the middle section of the ship, on top of the bridge and on the stern, which should pose no problems against aircraft, because you will be able to get at least 2 guns onto the enemy, but it can be hard to attack boats directly in front of the ship.

The BMO is one of the first Soviet boats that has a large variety of armament. At this stage, you may need to assign new buttons to be able to select your primary/secondary/anti-aircraft armaments, because the BMO works best when all of its weapons are used. Generally, the BMO should be played like a slower Motor Torpedo Boat that can stand its own ground. For example, at the beginning of match, it can rush a cap point and decimate the oncoming light boats with its 37 mm primary (which is comfortably positioned in the bow). When the cap is clear, the BMO can take on a defensive role behind some cover.

The 45 mm secondary armament should mostly be used against the larger American and German ships (PT-103 / S-100), but you still need to be careful, because those ships can easily take out your guns, and the BMO itself. If you're unsure whether it's best to use the 45 mm or the 37 mm, always go with the 37 mm, because it is much more forgiving.

As for the playstyle, simply use your 37 mm to obliterate any threats coming from the front, and if you're flanked or in a messy fight, switch to your anti-air armaments and continue obliterating everything. The AI gunners can be set to both surface and air threats, but if you are more experienced, you can change them based on the situation (more planes - focus on air threats; in a messy fight - focus on surface threats).

You need to play safer. Don't rush for caps alone, because ships of higher BR can easily sink you. You should flank your enemies where possible and unload your 37 mm (or even the 45 mm) into the exposed sides. The anti-air weaponry will be mostly useless against ships at this BR, so you can just set your AI gunners to air threats and focus on the ships.

Your greatest enemy in this BR is large sub chasers (SC-497) and other BMOs. When facing these, take out the primary armaments with your 37mm, as this is the effective, more than forgiving weapon to do so and then start shooting the ammo racks or critical modules and try to have a teammate with larger guns than you (a Soviet armoured gunboat is a perfect companion to pair up with as both have very similar speeds) to take the compartments, as you don't have the time to take on all compartments with such a small calibre gun. It is recommended to load AP clips, as these are very suitable for turret busting.

The BMO, produced from 1943-45 in Leningrad, was the final and most advanced iteration of the MO class of ships. Originally designed for anti-sub operations, the MO series also filled a multitude of roles including mine laying and sweeping, escorting convoys, and supporting amphibious landings. The BMO was the most versatile of the line due to the addition of armour as well as the replacement of one of the 45mm guns with a much faster firing 37mm gun to better deal with aircraft. A total of 66 BMOs were produced.