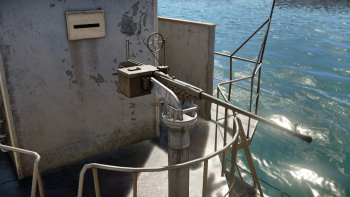 The Germans during World War II were widely documented as using foreign weapons of a variety of different types.  Small arms, artillery, and even vehicles captured from their enemies were pressed into service. There were even instances where the captured weapons were considered preferable to their own designs such as the Soviet SVT-40, which would influence German effort to develop the Gewehr 43. Other weapons were seen as inferior, but still used in combat anyways due to the fact the Wehrmacht (German Armed Forces) military build-up was lagging behind due to expectations that they wouldn’t go to war until the mid-1940s. The MG M38(t) is an example of a weapon that was pressed into German service during the war.

The gun began life as a Czech machine gun. Czechoslovakia was a new nation in 1918 carved out from Austria-Hungary. However, the new nation was quick to get its arms industry operational and maintain a standing military. The Zbrojovka Brno company was formed in 1918 to handle the development of the needed small arms for the Československá armáda (Czechoslovak Army). The need for such weapons grew increasingly important after Adolf Hitler came to power in 1933 as the nation grew concerned about German attempts to claim their territory which would indeed occur when they tried to claim the Sudetenland in 1938 and ultimately annexed the entire country in 1939. The ZB-60 was designed to serve as a heavy machine gun in the Czechoslovak Army. Intended for both an anti-infantry and anti-aircraft role, the ZB-60 was mounted on a wheeled carriage and chambered for a proprietary 15x104 mm Brno cartridge. Like other designs from the company, the ZB-60 was also exported notably to Yugoslavia and the British would copy the design to make their 15 mm Besa machine gun used on their Light Tank Mk VICs and their Mark I-III Humbler Armored Cars.

When Germany annexed Czechoslovakia in 1939, they captured the ZB-60 and used by the Wehrmacht as the MG M38(t). Later in 1941, Germany invaded Yugoslavia and captured their ZB-60s which were re-designated FlaMG 490(j)s as Germany mostly used these weapons as anti-aircraft guns. Similarly, Czech ZB-60s used in this capacity were re-designated FlaM39(t)s. The ZB-60 was given to the forces of the Slovak Republic when it declared independence in 1939. The guns were used by German in some capacity through World War II.