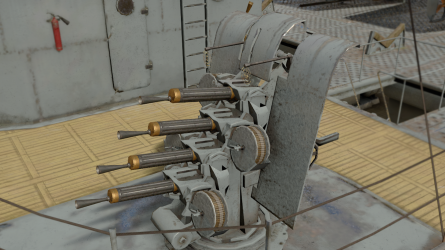 The Vickers Mk.V in a quadruple mount on Krasny Krym.

The Vickers Mk.V is a naval anti-aircraft machine gun.

During World War I, both the Allied and Central Powers worked on developing large caliber rifles for anti-aircraft, aircraft, and anti-tank use. The Germans were the first to finish such a weapon and the only ones to get it into service during the war with the Mauser 1918 Tankgewehr anti-tank rifles. However, the United Kingdom was not too far behind and was developing a .50 scaled-up version of the Vickers heavy machine gun that was World War I's mainstay. Development continued at a slowed pace after the war ended and the need became more apparent with the new wave of light tanks built during the 1920s and 1930s. British light tank development during the interwar period operated under the assumption that the light tanks would as scouts primarily and would be used in combat against other light tanks. At the time, most European light tanks had .47-.55 inches of armour, so the armament of the Light Tank Mark V had to be increased from the World War I-era Vickers .303 to a .50 Vickers Mark II. Through different variants based on this design, the Vickers Mk. V was born. Chambered for a 12.7x80 mm cartridge the Vickers Mark V is the main weapon for the British Light Tank Mk.VI Vickers built in-house for the Royal Tank Corps. While it was capable of penetrating early German armour during World War II, it was quickly rendered obsolete. The replacement on the later light tank starting with the Tetrarch I was the QF 2-pounder anti-tank gun.

However, the Vickers .50 would also see naval service. The Royal Navy used a variant called the Mark III a quad-mount design that later was used in twin or single mounts, the Mark III began production in 1926 but didn't enter service until 1932. The Mark III was designed following the inter-war doctrine of using heavy machine guns as close-range anti-aircraft weapons on warships. The guns had 200 magazines per barrel with a 700-round per minute cyclic rate for each gun on the mount. It wasn't long after World War II began that the Royal Navy realized these guns were not effective at shooting down modern aircraft and they moved on to the more powerful 20 mm/70 Oerlikon Mk.II to serve as their anti-aircraft gun on their large warships. However, 12,500 Mark IIIs were ultimately built and served through the war even longer than their tank counterparts. Their primary use was to arm smaller boats such as the Fairmille Motor Launches and MTBs of the Coastal Forces.