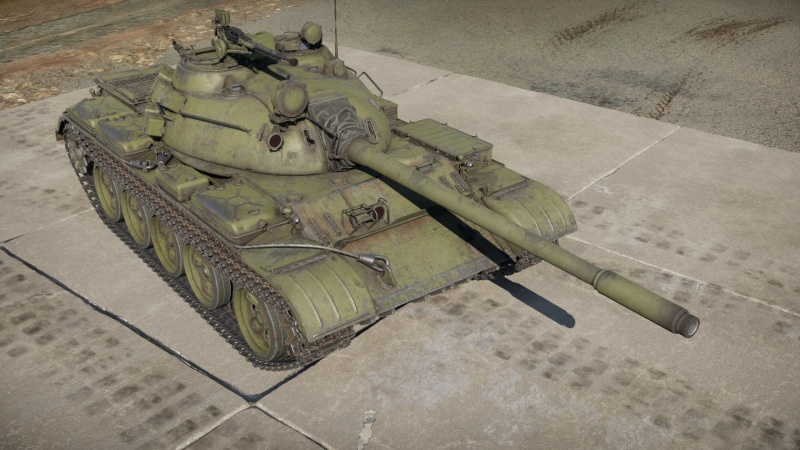 After active development of nuclear weapons, the T-54 was tested against nuclear charges. It was evaluated that the crew could survive only at distances of over 700 m, so it was decided to create a new tank that would have a nuclear, biological and chemical (NBC) protection system, or Protivoatomnaya Zashchita (PAZ). The initial designs for this tank were completed in 1956, however, that was without additional NBC protection. In 1961, the development of an NBC system began, and it was introduced in the new T-55A variant. Among other upgrades, the T-55 had an increased ammunition supply with 18 more rounds being stored in the fuel tanks.

The T-55 became a replacement for Soviet heavy tanks (IS series and the T-10). Armour was sacrificed for better mobility and a better gun. Currently, the T-55A is one of the only vehicles at its rank to still have an AP shell with explosive filler, which can easily knock out most vehicles in a single shot from the sides and some from the front (notably, Leopards 1). Unfortunately, the T-55A is relatively slow compared to other medium tanks at its battle rating.

X-Ray view of the T-55A when viewed from the side. Note how packed the tank interior is of critical components, ammunition, and crew.

The T-55A has moderate frontal protection, with 100 mm plates for upper front plate (UFP) and lower front plate (LFP) placed at angles 59° and 56° respectively; effective thickness frontally comes up to ~180 mm and ~200 mm, respectively. At a perfect angle, the T-55A can bring its frontal effective thickness to ~200 mm and ~220 mm for the UFP and LFP, while having ~250 mm of protection at the angled sides. However, the additional 20 mm of armour will rarely save the tank from APFSDS, or even APDS, shells that are flying around at this rank.

As for the turret, the T-55A has slightly less protection than the T-62 and combined with a generally larger turret, it is easier for opponents to hit and penetrate the turret. The thinnest spots are right next to the cannon breech, at 200 mm, which rather slowly becomes over 300 mm when moving further away from the breech.

The T-55A's weakest area to be attacked at is the port side; or when looking directly at the T-55A, its right side. This is because three of the four crew members are neatly lined up into a row. A well placed APFSDS shot to this area through the UFP will one-shot the T-55A.

Despite this vulnerability, it will do well for the T-55A's overall survival if it does not get hit at all during its lifespan on the battlefield. Due to how packed the interior is, any penetrating shot is sure to cripple or outright destroy the tank.

With a default APDS round available, the T-55A is somewhat viable in a downtier to assist going through the modification research. Aside from getting the survivability upgrades in the "Parts" and "FPE" modules, unlocking better ammunition choices should be prioritised in order to access the more potent APFSDS round and the HEAT-FS shell in the "3BM25" and "3BK17M" modules respectively. The "NVD" module should also be researched early in order to survive the possibility of the next ground battle being at night time.

The T-55A houses a 100 mm D-10T2S rifled anti-tank gun, which is equipped with an ejector and two-plane stabilizer arms. In-game, the T-55A has a 10.3 s reload rate, which is similar to its successor, the T-62. This rate of fire doesn't allow the T-55A to rush into battle and fend off waves of Leopards or M48s and M60s, but it is sufficient to defeat one or two opponents in quick succession with good shot placements, granted you shoot first.

The stock round (3BM-8, APDS) allows the T-55A to penetrate MBT-70 and KPz-70 frontally, as well as deal with all other major threats, notably the Leopards (which you can penetrate anywhere), and Chieftains (LFP, or UFP/LFP with the APFSDS round). One of the major advantages that the T-55A has over the majority of rank VI vehicles is its APCBC shell, which has the potential to knock out any opponent it penetrates in a single shot. It is advised to flank your enemies and when given the opportunity, easily destroy oncoming enemies with this round. 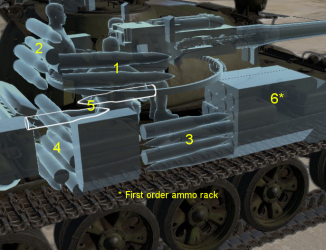 The T-55A usage in battle is very similar to the T-54 tanks prior to it. Aside from some minor design differences, the general armour layout of the T-55A is similar to that of the preceding T-54 (1951). The mobility is slightly better due to a more powerful engine, enabling a higher hp-to-ton ratio despite the small weight increase. The firepower of the T-55A compared to its predecessor is what makes it stand out, with access to the 3BM25 APFSDS ammunition that can penetrate 335 mm at point-blank range (compared to the T-54 (1951)'s point-blank penetration of 299 mm with the 3BM-8 APDS and 380 mm with the 3BK-5 HEATFS shell). The high-velocity and penetrating APFSDS shell allow the T-55A to more easily reach out and destroy long-range enemies. The option to use the BR-412D APCBC shell is also available to use in order to cause devastating post-penetration damages, especially against the Leopard 1 tanks that the APCBC shell can penetrate frontally. However, the presence of other tanks with enough armour to protect against the APCBC shell mean it is only situationally useful. Other helpful differences the T-55A has over the T-54 (1951) is a faster turret traverse rate and stabilizer, the latter of which is very useful when reacting to enemy targets on the move.

The T-55A is suited for a variety of roles and actions when assaulting or defending a point. In these roles, the firepower and mobility is sufficient, but the armour may not stand up against the enemy due to the prevalence of HEATFS and APFSDS ammo at this battle rating. As such, all these tactics should emphasize avoiding being seen and destroyed by the enemy.

A weak spot of the T-55A's is a shot through the upper front plate, which can knock out three of the four crew members easily.

The T-55A should use its mobility to advance with its allies towards the point. Unless in a downtiered match, try not to take point in the attack to avoid catching a shell right into the upper front plate, which could potentially knock the T-55A out. Avoid hilly terrain (due to the poor gun depression) and close quarter battle in urban terrain as the tank's reload and traverse speed are not sufficient to react to surprise enemy encounters, and the T-55A's rather poor reverse mobility makes retreat difficult, especially in an enclosed area.

The open plain is perhaps one of the better terrain to use the T-55A. The APFSDS dart can allow the T-55A to reach out at enemies that attempt to snipe from a distance. The low profile of the T-55A can even make use of the plain's depression and hills as cover and concealment as it moves closer to the enemies for a better shot.

The T-55A has enough mobility (when upgraded) to try larger flanking manoeuvres against the enemy on more open-spaced maps. Use the T-55A's profile to conceal its advance with the terrain. Use this to get the jump on enemy when they start receiving APFSDS shots from a direction they didn't expect the T-55A to be. Do note however that the T-55A can also encounter enemy flankers like the Leopards, which are faster and have enough firepower to end a T-55A should there be an unexpected encounter during this manoeuvre.

The T-55A has a turret traverse that can cover an angle of fire rather quickly, and the APFSDS means it can reach out and hit enemies from a long way before the enemy could get a good visual of the T-55A's position. Establish a zone for the T-55A to cover, preferably one with a choke point that enemies have to funnel through. Coordinate with allies to try and cover all necessary sectors against enemy advances onto a point as while the T-55A can deal with one or so tanks sporadically appearing in its zone, a coordinated attack by the enemy could very quickly overwhelm the T-55A's capacity to defend itself and the point.

Although the T-55A can make short work of most enemies with its APFSDS round, some enemy vehicle in an uptier can be quite difficult to handle:

The T-55A is a variant of the extremely-popular T-55 main battle tank produced by the USSR after the Second World War. Along with the earlier T-54 main battle tanks, the T-54/T-55 MBT family is the most-produced tank series in history. The T-55 MBT design featured numerous improvements over the prior T-54s, including additional NBC (Nuclear, Biological & Chemical) protection systems, a new heavier turret, more ammunition, and improved equipment. The T-55A was a late modification of the earlier T-55 MBT, including improved NBC systems.

The T-54/T-55 family of main battle tanks were among the first main battle tanks to be introduced. The tanks were designed as a follow-up to the T-34 and T-44 medium tanks. Notably, the new T-54/T-55 tanks were fitted with a 100 mm rifled gun that was capable of penetrating the most heavily-armoured western tanks of the time but had a faster reload compared to the 122 mm guns used on the IS-series of heavy tanks.

The T-55 was designed as an evolutionary development of the T-54 MBT and included numerous changes compared to the previous tank model. Notably, the T-55 received NBC protection equipment designed to protect against tactical nuclear weapons. The T-55A further improved on the T-55's NBC protection system by introducing a full chemical weapon filtration system along with an anti-radiation lining inside the tank. These improvements greatly increased the crew's survivability against nuclear or chemical warfare. Compared to the T-54, the T-55 had its total shell capacity increased from 34 to 45; the T-55A was able to carry six more shells, through the removal of the hull machine gun.

The T-55A began production in 1963 and continued until 1977; numerous improvements were developed, including the T-55AM, a modified version of the T-55A featuring composite armour. The T-55 family served extensively with countries of the Warsaw Pact and was exported to many other countries. The T-55 family was retired from the Russian army in 2012 with remaining vehicles sold off to other countries; variants of the tank remain in service with numerous countries.