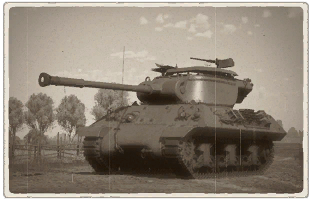 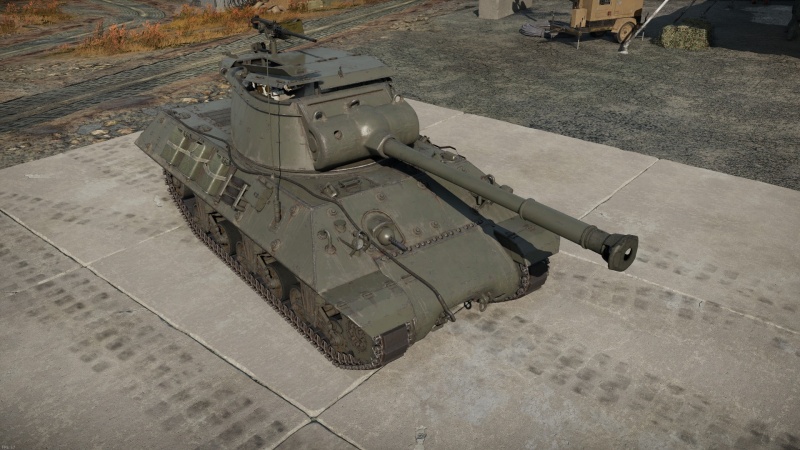 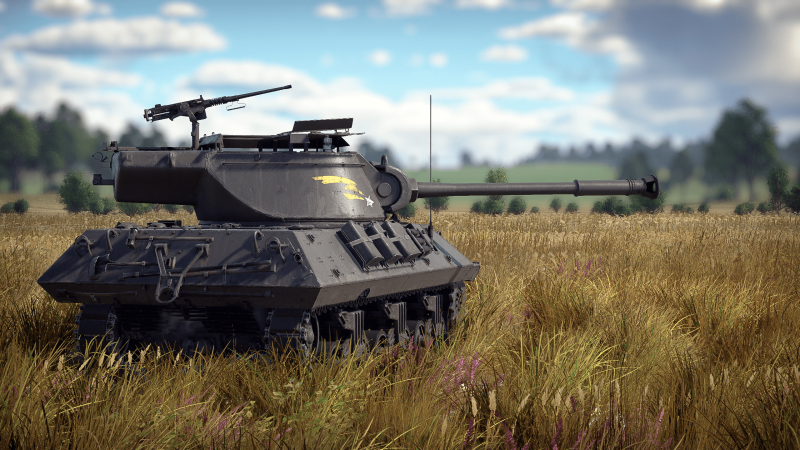 The 90-mm Gun Motor Carriage M36, SDF is a rank IV Japanese tank destroyer with a battle rating of 5.7 (AB/RB/SB). It was introduced in Update "Danger Zone".

The armour of the turret roof is only 6.5 mm thick, the sides are 17-31.75 mm thick and ammo stowage is only 25.4 mm thick, this makes it vulnerable against attacks from aircraft, artillery strikes, SPAAGs, overpressure and machine guns (namely 50. caliber and above). The M36B2 is notably tall and large for a tank destroyer, which makes it harder to conceal and somewhat limits what type of cover is effective.

The lacklustre acceleration makes the tank struggle greatly with climbing slopes, hills and limits its manoeuvrability, the engine upgrades only somewhat alleviate this issue.

The 10° gun depression gives the M36B2 the capability to shoot over hills. The reload speed is pretty long with a loaded ready rack, making engagements more dangerous, especially if there is a lack of cover.

The M36 has a roof-mounted M2HB to shoot down low altitude planes. It can also be effectively used against light armoured vehicles to great effect.

In the hull, the radio operator gunner has the ability to use a M1919A4 light machine gun which, other than spotting and against unarmoured vehicles, can't provide much anti-vehicle support.

Due to the outbreak of the Korean War, the GHQ (General Headquarters of Allied occupation) ordered Japan to re-militarize, while the US also provided plenty of M4A3 (76) W and M24 tanks to help Japan form their armed police force, the NPR (National Police Reserve), so more US forces could fight in Korea while Japan could still maintain reserve manpower for defense. Multiple M36B2s were assembled at a depot in Akabane which would be shipped to the Korea peninsula to support South Korean and American forces.

However, the tanks that the NPR received were too big for the average Japanese tanker. In order to replace the obsolete Sherman and Chaffee tanks, Japan got a M36B2 for research purposes to help develop a new domestically designed tank, which would eventually be developed into the Type 61.