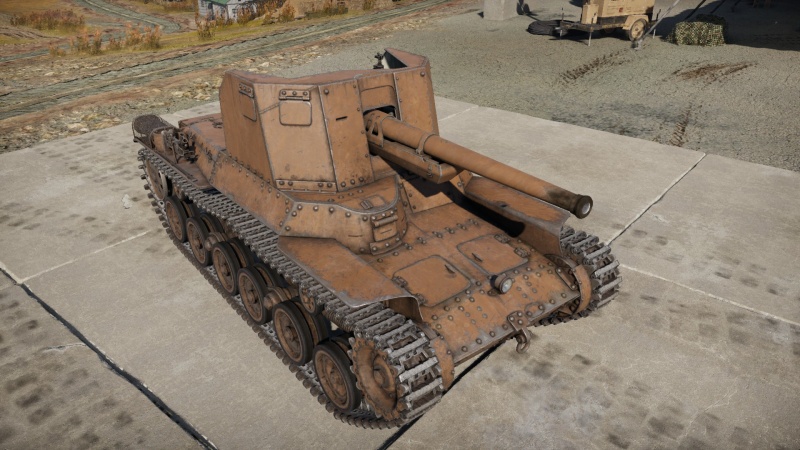 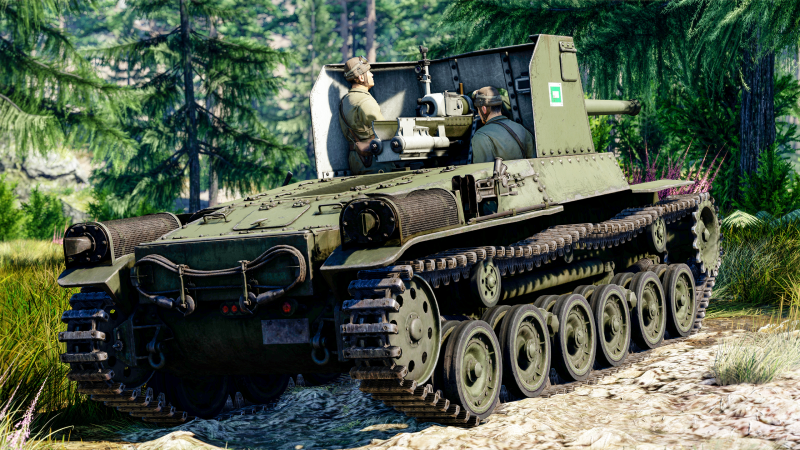 The Type 1 Ho-Ni I (一式砲戦車「ホニI」) is a rank II Japanese tank destroyer with a battle rating of 2.0 (AB/RB/SB). It was introduced along with the initial Japanese Ground Forces tree in Update 1.65 "Way of the Samurai".

Similar in appearance to the Ho-Ro before it, it changes out the 150 mm artillery cannon for a more traditional high-velocity gun, being one of the most powerful ones at its rank.

However, with no turret and very bad armour protection, it demands caution and patience, in exchange for being able to smash through even the heaviest tanks it faces. The fearsome Char B1, the terror of Rank I for example, is no match for the Ho-Ni. Play this tank with caution and you will be rewarded greatly.

The Ho-Ni I's excellent firepower and good mobility is balanced out by its very poor armour protection. The front of the hull is covered in unsloped 25 mm plates, which is only sufficient to protect the tank from machinegun rounds - and even then some high-calibre guns (such as the 50 cal or DShK) can find their way through.

In addition, the gun compartment of the tank is uncovered, leaving the gunner and commander extremely vulnerable to artillery, machine guns, and aircraft attack. As the tank only has three crew members, the two being knocked out will leave the vehicle inoperable. Be sure to immediately retreat away from any artillery, preferably with your front facing the area being attacked, in order to protect the crew.

It is also important to try not to arouse the attention of enemy aircraft, as the open design means that any fighter plane can easily destroy you in a single strafe. With no machine gun, it does not have any means of fighting back against them either, so stay in the shadows!

The Ho-Ni I is based off the Chi-Ha chassis, which Japanese ground forces will be familiar with since it is featured on other Japanese early tanks: Chi-Ha,Chi-Ha Kai, Ho-Ro and Ho-Ni III.

Thus, it has a fairly good level of mobility, reaching a peak speed of 36 km/h on flat grass in Realistic, with a theoretical maximum of 40 km/h. It also has a quite good traverse rate, both on the hull and the gun, performing a full 360 degree rotation from a stop in about 16 seconds.

Packing a high-velocity 75 mm Type 90 cannon, the Ho-Ni I has a serious amount of firepower.

Its Type 1 APHE shell has up to 100 mm of armour penetration, which is the second best of tank destroyers at its rank, only beaten by the Soviet ZiS-30, and being very closely followed by the American M3 GMC.

However, a cannon this big does come with two drawbacks; being that it has a fairly long reload time of 7.8 seconds, and no turret, meaning it can only aim in an arc in front of you. Thus, it is important that you make sure your shot lands, and that you are well aware of your surroundings, so that you do not end up wasting precious time turning your entire hull towards an enemy. You should play this tank as a support vehicle, hiding in bushes and shooting at targets at medium range. Chances are, you'll be able to penetrate and score one-shot after one-shot. You could also play as a sniper, if you are so inclined.

The Ho-Ni I does also not feature any machine guns, which leaves it unable to fight back against enemy aircraft or uncovered vehicles. 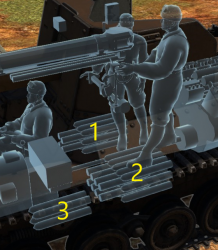 Ammo racks of the Ho-Ni I

The Ho-Ni I should be played like most open crew compartment, fixed gun tank destroyers, fighting from a distance from the front-lines and delivering support fire. The thin armour means the Ho-Ni I will not survive a direct confrontation with any enemy tank and will require the vehicle to obtain the fighting advantage of being able to target the enemy first to ensure any chance of victory. The Ho-Ni I should also be wary of enemy aerial attacks as the open compartment and three-man crew means that an accurate strafing fire could potentially knock out the entire crew.

At its battle rating, the worst the Ho-Ni I could face are the German Pz.IV E and British Cromwell V and Matilda Mk II. The two medium tanks have sufficient armour to withstand the 75 mm gun while the Matilda II requires precise shot in order to destroy it frontally - the driver's port. All of these tanks have guns able to shred the Ho-Ni I apart if they could get a bead on it. The Char B1 can also be a challenge, the only way to deal with it head on is by shooting the driver's port, which will require making you vulnerable to the powerful 75mm hull gun that tank has.

The creation of their own independent armoured division had Japan also envision an enlargement of their artillery forces. They decided to build a series of assault guns based off the Type 97 Chi-Ha chassis. One of the first of these design was the Ho-Ni I which had the Type 97 chassis fitted with a 75 mm Type 90 field gun.[1]

The Ho-Ni I was used in China by the 3rd Tank Division and on Luzon by the 2nd Tank Division. It could be used as mechanized artillery or as a tank destroyer/assault gun. A total of 124 were built.