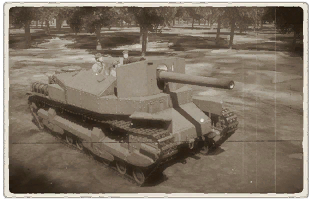 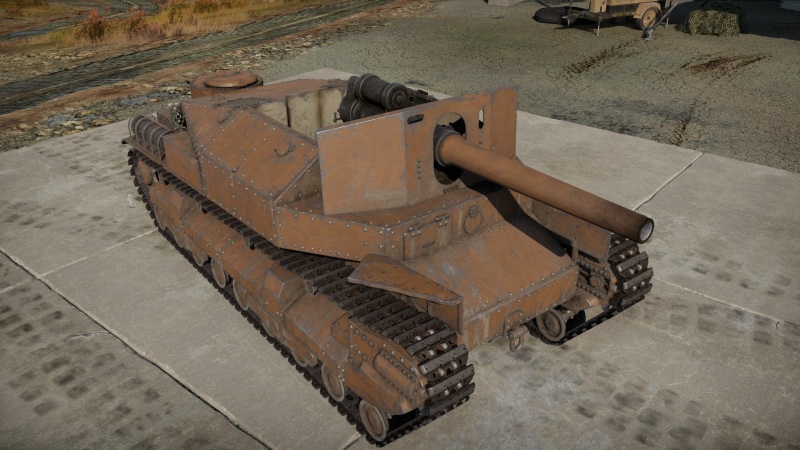 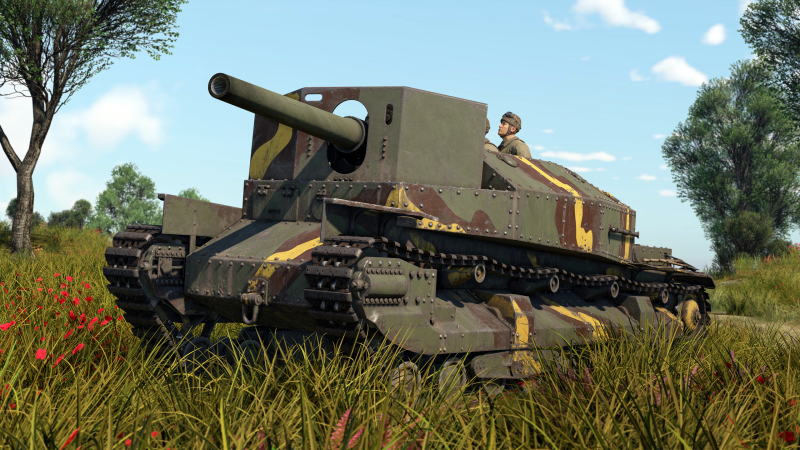 The Type 95 Experimental 12cm Self Propelled Gun is a rank I Japanese tank destroyer with a battle rating of 1.7 (AB/RB/SB). It was introduced in Update "Ixwa Strike". The Ro-Go Experimental is a modification of the Ro-Go platform. It features a French model 120 mm Schneider-Canet 1898 cannon as its main armament.

Similar to the Ro-Go it is based off of, the Ro-Go Experimental's armour is mostly comprised of large flat armour plates, though some are slightly angled. Front armour maxes out at 30 mm, with the angled sections such as the upper glacis being 25 mm thick. The shield surrounding the cannon, and by extension the crew, is 12 mm thick. Given the mostly flat shape of the Ro-Go Experimental's hull and relatively average armour thickness for its battle rating, a majority of incoming fire will be taken with full force, especially if it hits the flat plates at the front of the vehicle. Slightly angling the front of the Ro-Go Exp. may result in some shell ricochets, however. Much like its predecessor, the Ho-Ro, the Ro-Go Exp. can be easily penetrated by most other vehicles at its battle rating, but it does feature some odd angles that may result in lucky bounces. The Ro-Go Exp. does have a large crew count of 7, although they are rather lined up and a majority of them are in the open.

The Ro-Go Experimental shares the same drivetrain as the Ro-Go, featuring an inline 6-cylinder engine. It has mediocre mobility, noticeably more sluggish than its Chi-Ha based counterparts.

The 120 mm main armament of the Ro-Go Experimental will penetrate almost everything at its BR within a reasonable distance. The cannon, while considerably antiquated having been designed in 1897, fires a Semi-Armour-Piercing Capped Ballistic Capped round, which penetrates a maximum of 68 mm of armour at 10 m, even at 1,000 m the SAPCBC round can penetrate 53 mm of armour, certainly powerful enough to deal with most opponents at this BR. The round has a relatively low muzzle velocity and an average firing arc. The HE round has a significant amount of filler but does not have one shot potential like the HE round of the Ho-Ro or the S.I.G.33 (150 mm). The SAPCBC round can also incur HE-type damage even if it does not penetrate due to its high filler content. However, it may be wise to carry a few dedicated HE rounds. 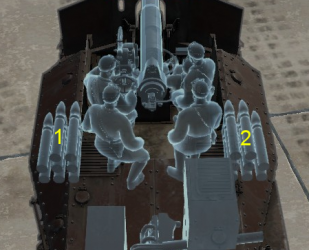 Ammo racks of the Ro-Go Exp.

The Ro-Go Experimental plays like its predecessor on the tech tree, the Ho-Ro, but with some key differences. It has a faster reload time, but is noticeably less mobile and a larger target, a trait inherited from its basis on the Ro-Go chassis. Also unlike the Ho-Ro, the SAPCBC round has very good penetration and does not rely solely on HE filler to cause damage. It is completely open topped and the gun shield is only 12 mm thick, making the exposed crew extremely vulnerable to CAS and heavy machine gun fire. However, the Ro-Go Exp. does have some tricks up its sleeve - specifically the rear machine gunner. Like the Ro-Go, this crewman is largely useless in terms of offense, but will rarely be the first to be knocked out in a fight, essentially giving the player a somewhat guaranteed crew replacement. Play the Ro-Go Exp. like you would other Rank I and II Japanese Tank Destroyers, either freelance and find a good spot to get the jump on opponents, or stay back with other players and support from the rear. Like other Japanese SPG's, you are somewhat of a glass cannon. Remember that you can only spawn with 16 rounds maximum.

The Ro-Go Experimental (sometimes incorrectly referred to as the Hi-Ro (sha) or Ji-Ro) was a prototypical field modification to the Type 95 Heavy Tank. 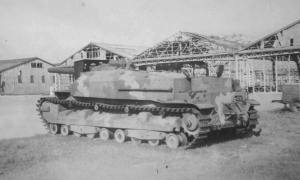 The Type 95 Ro-Go Heavy Tank was in itself a low production experiment, but its hull was the basis for a few other trials, namely for its use as an SPG. The result of using a remaining unused Type 95 hull, field modifying the tank by replacing the two turrets with a 120 mm Schneider-Canet cannon mounted at the front of the chassis. Both a long and a short version of the cannon were tested. These cannons were originally of French origin and built under license by the Japanese.[1][2]

A different configuration was brought to the drawing board by the original designer of the Type 95 Ro-Go, Tomio Hara. He designed what would be known as the Ji-Ro on the same hull but with more modification to the base hull, completely getting rid of all the 3 turrets, moving the engine and fully enclosing the casemate at the end of the vehicle.[3]