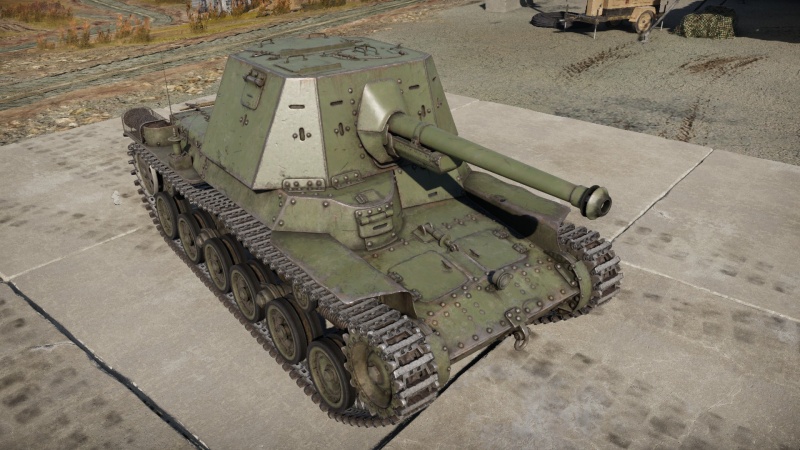 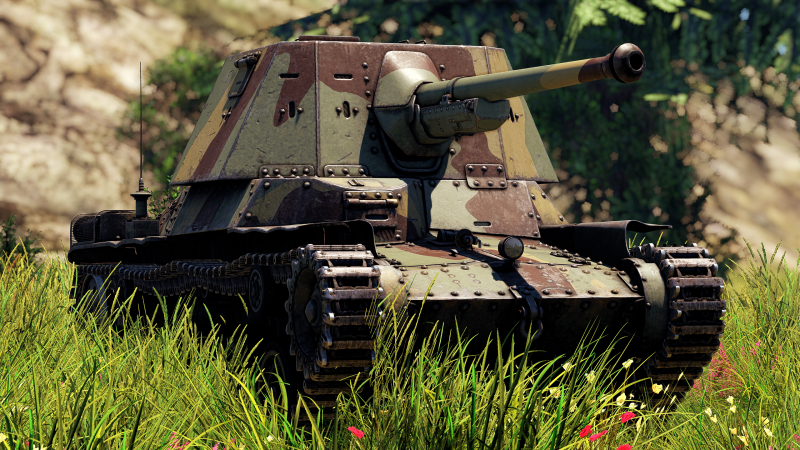 The Type 3 Ho-Ni III (三式砲戦車「ホニIII」) is a Rank II Japanese tank destroyer with a battle rating of 2.3 (AB/RB/SB). It was introduced along with the entire Japanese Ground Forces tree in Update 1.65 "Way of the Samurai". It handles and plays very similarly to the Ho-Ni I before it, but has been refined with the addition of more crew, a faster reload time, and most importantly, armour around the gun crew. However, it pays a slight cost of reduced top speed.

Having 25 mm of armour coverage around the entire gun crew, the Ho-Ni III no longer needs to fear artillery shrapnel or strafing runs from fighter aircraft. Do note however that it's still vulnerable to bombs, rockets and direct artillery hits! However, if the Ho-Ni III takes a hit, likely to survive with more operational crewmembers, as three of them must be knocked out before the vehicle becomes inoperable.

Another small armour increase is seen on the front of the tank, with the driver and radio station protected with another 10 mm of armour, though with this added strength, it still leaves an undesirable total width of a lacking 35 mm.

The Ho-Ni III features a modernized Type 3 75 mm tank gun, based on the 75 mm Type 90 field gun as on the previous Ho-Ni I, still being a great cannon, even with a slightly higher battle rating. With the addition of two dedicated loaders in a fully closed casemate, the gun also gets almost a second cut down on its reload time, making it capable of even more destruction. 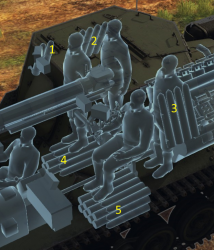 Ammo racks of the Ho-Ni III

The Ho-Ni III plays very similar to the Ho-Ni I with the added benefit of two extra crew which cuts down on the reload time for the 75 mm gun.

The starting Japanese player will also be quite accustomed to the handling of the hull, as it still is based on the Chi-Ha. But due to the added weight of the fully enclosed casemate, it is slower compared to its brother Chi-Ha.

With the added benefit of the casemate and crew, the Ho-Ni III sports better survivability, though, most shells will not knock you out in one shot due to having a total of five crew members. The crew isn't out in the open anymore and has sufficient armour from machine-gun fire from both ground & air enemies. Knowing this, you can stand to take more chances of sitting in one location and not have to worry about aircraft making a single pass and taking the vehicle out.

The Type 3 Ho-Ni III is a self-propelled anti-tank artillery gun. The Ho-Ni III was the third of the Japanese 'tank destroyers', which Japan developed based on inspiration from the German tanks of this class. This SPG was very similar to the previous models of this series, the Ho-Ni I and Ho-Ni II, but surpassed them in multiple ways, embodying all the very best of each of them. The chassis of the medium Type 97 Chi-Ha Kai tank was used as a base, while the Ho-Ni I and II used a simple, unmodernized version of the Type 97 Chi-Ha. The powerful 75 mm Type 90 field cannon was chosen as a gun. In its design, this was a counterpart of the French 85 mm Schneider cannon (85 mle 1927 Schneider). After a small redesign for installation on the tank, this gun was designated the Type 3. The cannon was installed in an armoured non-rotating superstructure which, in contrast to the Ho-Ni I and Ho-Ni II, was fully enclosed on all sides and provided optimal protection for the crew. Additional ammo took the place of the machine gun in the hull, and the SPG's crew was reduced to four (in comparison to the five of the previous vehicles in this series).

Ho-Ni series SPGs went into production in 1942, and the order to design and produce the upgraded Ho-Ni III was received by the Hitachi firm in the beginning of 1944. Due to a shortage of resources and constant bombings, the Japanese industry was only able to produce roughly 35 Ho-Ni III SPGs before the end of the war. Most of them were distributed among divisions tasked with defending Japan itself, while only a few were sent to areas of active military operations such as Okinawa and the Philippines. No records survive of military clashes between the Ho-Ni III and American tanks.