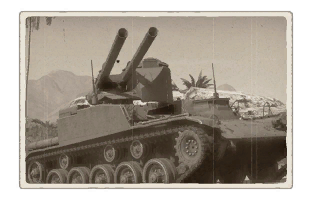 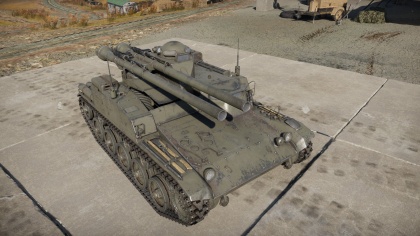 The Type 60 Self-Propelled Recoilless Gun (C) (Type 60 SPRG (C)) is a rank IV Japanese tank destroyer with a battle rating of 6.7 (AB/RB/SB). It was introduced in Update 1.65 "Way of the Samurai" along with the initial Japanese Ground Forces tree. The Type 60 is the first vehicle in War Thunder to implement a recoilless gun as the main armament of a vehicle.

The principal role of the Type 60 SPRG is as a short-range ambushing "Tank destroyer" where it can make maximum use of its dual 106 mm M40 firepower to best effect, it is better suited to short range engagements and can find it difficult to make meaningful contributions to the team, on maps where the engagement range is far and distance.

A secondary role for the Type 60 SPRG is as the budget "light" tank, it is quite nimble with a low profile enabling it to rush to caps and make use of cover, where a large vehicle would not be able to, however it is also extremely lightly armoured and most of the times it cannot properly use hull-down spots, so it is not a very good holder of the cap point.

A tertiary role for the Type 60 SPRG is to make use of the "reconnaissance" function and mark opposition tanks for teammates which it can see but are too far for it to engage directly its own weapons. It also has the ability to repair allied vehicles.

The secondary and tertiary roles enable the Type 60 SPRG to contribute to the team even on maps where its unable to directly attack opposition vehicles, however, it does make you heavily reliant on teammates taking advantage of your efforts to capture points or mark opposition targets, but it is possible to have decent games in this passive role.

It is a small squat vehicle, most of its height comes from the raised platform that houses the twin 106 mm M40 on the left side (facing it). This raised platform enables the Type 60 to have an impressive 20° degree of gun depression combined with a 60° arc of fire to the right and left of the vehicle, however, it is also responsible for leaving an open area into the fighting compartment leaving the Commander/Gunner exposed to MG fire.

The Type 60 SPRG light armour and in some cases absence of armour (open gap in front of the Commander) means that even return MG fire can be deadly. The only area which can reliably stop machine gun fire is from the right side. It lives and dies on being able to engage first and retreat thus should be usually played in ambush or supporting the flanks of advancing tanks, it is not built to be a front line "tank destroyer".

Its frontal armour is capable of stopping certain planes fire, but the rest of it might as well not exist. It won't stop attackers from destroying Type 60 either.

Due to this, when enemy tanks fire APHE at commander's turret, it almost always fails to detonate and only takes out one crew member. This still doesn't change the fact, that commander's compartment is a huge target, and commander IS the gunner, and so you might be unable to fire back. This is a very big problem in AB, as people tend to shoot at SPRG the very instant they see it, often prioritizing it over anything else.

While the vehicle is quite lightweight at 7.7 tons, the diesel engine is not a particularly beefy meaning while quite quick and nimble, you are often left wanting more horsepower when ascending hills and particularly when attempting to escape from a failed ambush or multiple enemy tanks.

Avoid getting stuck on a hill while facing downwards, as it will take approximately two minutes for stock Type 60 SPRG (C) to free itself unless it is wedged in for good. Care must be taken as even spaded tanks can get stuck for good.

The vehicle is too lightweight to attempt to plough through the weakest of stone fences, which even the lightest tanks normally drive over losing only 2 km/h, and the rangefinding machine gun cannot be used to destroy most of them either. Consider driving around them, unless you want to risk getting stuck while trying to get over them.

In arcade mode, one might consider using reverse more often, as it is much more responsive than the forward travelling gears, especially for turning around (because of its higher torque).

Type 60 SPRG uses two recoilless rifles. They only fire chemical ammunition, which should be always kept in mind. They explode if contact with anything on their flight path.

Both rifles are on separate triggers, and so it is very recommended to unbind "fire additional weapon" from "fire main gun" button (left mouse button by default). This way you can use both guns separately to attack two tanks at once or adjust aim in case of a miss. In some cases, you can even fire one gun to destroy an object shielding the enemy tank and as soon as it collapses, destroy the enemy tank with the second gun. It's not likely that enemy will be going anywhere after being critically hit by chemical warhead anyway, so most of the times firing both guns in quick succession is a waste of ammunition.

Ammunition Choice for this vehicle is a bit of a headache for a number of reasons:

When rearming at capture point, keep in mind that Main gun (left gun) rearms first, and only one of them rearms at same time, so you might want to save at least one shot for secondary gun just in case someone tries to interrupt your rearm and one shot wasn't enough to destroy them.

It is worth noting, that hull-down is very difficult to accomplish with this vehicle due to the main gun's height being similar to the commander's tower height. In arcade mode Type 60 should not be doing this, due to arcade battle markers making it very easy to spot and counterattack. 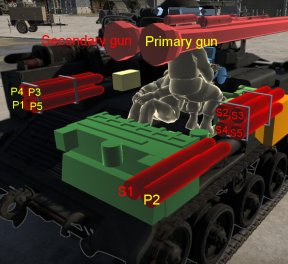 Type 60 (B) machineguns are mounted on top of rifles to provide rangefinding. They are not suited for combat and obstacle-clearing in any way, and only the flimsiest of fences will be damaged by them. The point of them is to be used to see, where shells of rifles will land.

However, they are only effective up to about 800 m, as trajectory starts to deviate past that point.

It is technically possible to use them to shoot down fighters, but only if they are directly strafing you - aim for the pilot. Anything else would do no damage to the plane.

The Type 60 SPRG is predominately suited to short-range ambushes of opposition tanks. It is quite diminutive in stature and relatively mobile allowing it to manoeuvre into position, typically behind a hill, where it can use the impressive 20° degree of gun depression, to quickly pop up and deliver dual 106 mm M40 to a target before pulling back to reload or relocate. In AB, you can use scouting to mark interesting targets and hide away while keeping re-scouting them, to virtually disappear from the map for a while.

If the target is far away enough and the hill is steep enough, due to naturally high HEAT flight angle it is sometimes possible to fire shot above it without having to expose the SPG. In AB one can aim using "binocular aim" trick (point binoculars at target and hold main firing button to turn turret towards the target), in RB one have to use rangefinding MG and check it's flight pattern to see where shells will land.

It is possible to fire at targets outside of your rangefinding MG range (800 m), however, the low ammunition count (10) and low muzzle velocity (~500 m/s) of the 106 mm M40 projectiles combined with projectile drop, means you either must be very sure of your aim or located near a cap point for reloading, and so the usual engagement range should be under 1000 metres.

Often it is better to hold fire when you have observed an opposition vehicle to see if they will present a better target and only fire when you are confident you will secure a hit or are about to be discovered.

For maps with little to no cover, your best bet is to find some ASAP, even if it is in the form of dead tanks. For maps like Maginot, El Alamein or any of the city maps; stay near pieces of cover that blend with your camouflage layout. For example, in the cap circle in the main town in Maginot; hide in the little garden area's that are blocked by walls and use this to hide if you are being tracked down or as an ambush position. Remember not to cause too much environmental damage as it will make it too visible and leave the trees up, so planes will have a hard time finding you.

A recommendation is to use all M344A1 HEAT till you have got used to aiming the weapon then perhaps try using the HESH approach to see if you get better results. There is no specific enemy for the Type 60 SPRG due to the extremely light armour and in some place absence of armour, a gap between the dual 106 mm M40 and the hull in front of the commander, makes the Type 60 SPRG extremely vulnerable to even return machine gun fire.

If at all possible you should approach an opposition target from the left as this will allow the driver's viewing port to extend past the gap in the armour prevent the opposition targets from machine-gunning directly into the interior of the tank.