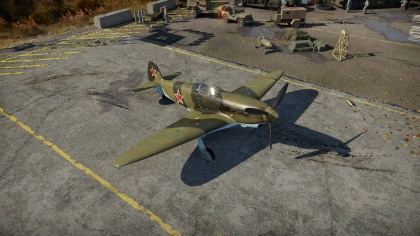 The Yak-1B is a Rank II Soviet fighter with a battle rating of 3.3 (AB/SB) and 3.0 (RB). This aircraft has been in the game since the start of the Open Beta Test before Update 1.29.

The Yak-1B can outfit external armaments:

1) You will have run your engine out trying to climb, so your engine has less time before it overheats than usual. (You also don't climb as fast as most other planes, in fact, there are better Soviet aircraft for climbing, such as the MiG-3 and the La-5).

2) You will be highly visible.

3) You will have reduced manoeuvrability.

4) You will easily rip your wings upon trying to dive (The Yak's wings, is made of wood, disappear at about 600 kph).

2) There is almost no chance of ripping wings.

3) You are already at optimal altitude and speed for manoeuvring.

4) Enemies easily overshoot you or rip wings attempting to dive on you.

5) You can trick enemies into flying into the ground (make sure you don't do so yourself!).