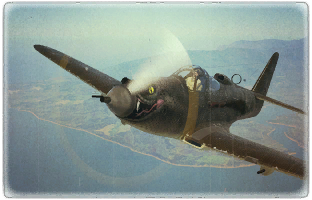 The ␠Kingcobra is a rank III gift American fighter with a battle rating of 4.0 (AB/RB) and 4.7 (SB). It was introduced Update 1.77 "Advancing Storm" during the "Flying Serpent, Crouching Tiger" event spanning between 31 March to 03 April 2018. This Kingcobra "animal" is a gift version of the P-63C-5 Kingcobra.

The Kingcobra (USA) can be configured with the following ordinance:

Like the regular P-63C-5 aircraft is an improved version of the P-63A-10 carrying the same armament and main gun. The aircraft is still a high altitude interceptor/ Energy fighter, with it's turn radius slightly better than before. The quick dive speed and high energy retention allows the player, with the correct altitude, to engage opponents below numerous times using the high yo-yo method. This aircraft should not be used for ground attacking due to it's average ammo count.