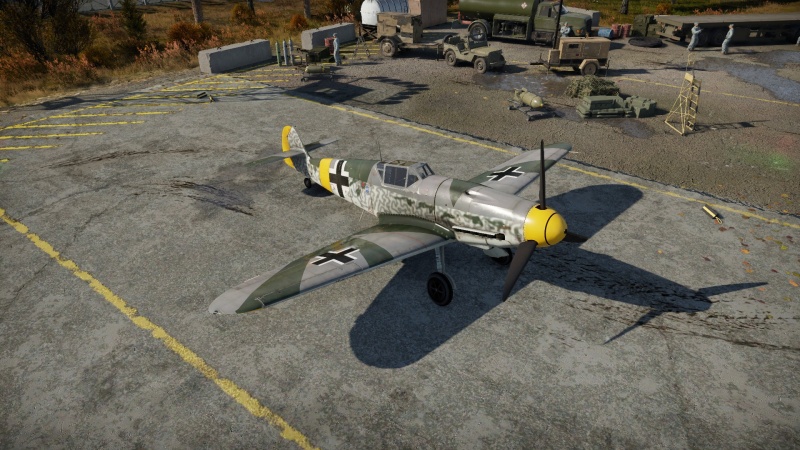 In the hands of a good pilot and employing energy fighting tactics this aircraft can outfly and outmanoeuvre most of the prop planes it faces even at higher battle ratings during up-tier situations due to its low energy loss in turns, high acceleration, high sustained climb rate and low stall speed. It is slower than the later model 109s but it has a better turn rate. The Bf 109 can fly very well at the deck and at high altitude making it a complete energy fighter.

The Bf 109 F-4, although a small plane, is a sturdy plane that can survive a lot of damage and retain much of its manoeuvrability when damaged. Its self-sealing fuel tanks increase the chance to put out a fire.

The Bf 109 F-4 performs at its best when used as an energy fighter. Its flight performance is impressive up to 6,000 m then decreases, so at the beginning of the match, you can outclimb most of the other planes at its rank and then energy fight them in the vertical Boom & Zooming from above. Its low stall speed and ability to prop hang even at less than 100 km/h at more than 40 degrees for many seconds makes it an ideal aircraft for spiral turns and snapshots. Bf 109's good turn rate and roll rate allows it to turn fight not only US planes but also Lavochkins and Spitfires which lose their energy at their first turn. If you engage in a dogfight with a superior turn fighter you can still out turn him by creating some separation and using frontal barrel rolls until the other plane turn by turn loses enough energy and finally its turning ability. It is not recommended to turn-fight Japanese planes or Yak fighters; if engaged on a turn-fight go to the vertical and use the spiral climb stall technique. The high acceleration, turn rate, climb rate, excellent stall characteristics, at all altitudes makes it a wonder to fly. All this gets significantly reduced when gondolas are added on. The 20 mm MG 151 cannon when used with Air targets belt that have a significant amount of Minengeschoß filled shells and is devastating which can be used for a precise fake out head-on or precise long-distance shots allowing you to start shooting as far out as 2 km.

Arcade with joystick: Although the plane still has a yaw wobble, it is low and can be mitigated with Realistic controls. You can set yaw non-linearity to 3.8 adding some dead zone and decreasing multiplier to stiffen and reducing the wobble. The pitch and roll work well and give good controllability.

Unfortunately, the F-4's 15 mm additional gondolas do not increase the damage output much at all, while reducing flight performance. However, it is recommended you at least use it once to see how effective it is because depending on how you play it can really boost your kill abilities. For example, if you prefer to get into a dogfight, the additional weaponry will not be noticeably effective. However, if you fight in the vertical, where level speed and agility are not necessarily most important, the additional MG 151's can mean the difference between a kill or nothing at all.

The Bf 109 F-4 is not a great plane when compared to the other Rank 3 planes, but it is effective nonetheless. Do not try to kill a plane by coming behind it and giving them all you got- you don't have much. Instead, try to scare your prey into a turn by peppering it with your 7.92 mm MG 17s, and then blow its wing off with the cannon.

Word to the wise: the F-4 is a fairly good turner for its class; if you are chased by a F4U, P-51, P-47D, F6F or Typhoon, turn and destroy. The forward wing slats give the F-4 an exceptionally short turning radius. However, to survive a tangle with a Spitfire is an ordeal. The best strategy would be to scissor until the Spitfire either runs out of ammo or overshoots you and then try to dive and outrun it. Then, repeat. Do not try to out-climb the Spitfire, but try to outrun it in a dive. The Spitfire Mk Vc is superior to the F-4, so avoid them.

In Simulator, the Bf 109 F-4 is quite a friendly fighter that can perform many tasks. It offers great flight performance with its smooth handling, adequate speed, and impressive climb rate and turn rate. Its nose-mounted armaments do not require any convergence settings, making it very easy to aim. The nose gently slopes down from the windscreen, offering great over-the-nose vision. There are also a few bomb options to choose from which are beneficial for ground-pounding or base-bombing, although these are not its primary objectives. However, the Friedrich does have rather limited cockpit view obstructed by its numerous canopy frames. Rear view is significantly worse as a solid armour plate headset is added, preventing the pilot from seeing what is behind which can sometimes be fatal. It also behaves poorly during takeoffs due to its torquey engine.

Bring at least 30 minutes of fuel for prolonged patrolling and fighting. The convergence does not really matter, it might be anywhere between 250-600 m. Depending on the task you wish to complete (eg destroy enemy attackers), gunpods can be helpful, if available. Although they slightly worsen the flight performance, that extra burst mass can be the difference between a "Hit" and "Aircraft destroyed". Finally, you can set keys for vertical head movement, as lifting up your head a little helps improving the over-the-nose visibility.

Taking off in a Bf 109 F is considerably harder than a lot other aircraft. When taking off, the Bf 109 will shift severely to the left side due to the huge torque, so consider setting keybinds for left and right brakes, as they are more effective at directional control than the rudder while on the ground. As the plane is just lifting off the ground it will start rolling to the left due to the torque, so you must immediately roll a little right to keep it level, or the left wingtip will strike the ground.

Dogfighting in SB involves everyday RB tactics. Utilise common manoeuvres such as Immelmann, Split-S, scissor, barrel roll, etc. The 200-round magazine of the Bf 109 F-4 does allow you to fire slightly longer bursts at slightly longer distances, but getting close until the target fills up the reticule is still a good choice. Note: the Bf 109 handles very sluggishly in the roll axis at low speed, so take this into account if dogfighting at low speed/altitude. You can even pull the elevator fully for maximum agility, but only if you pull gently and gradually will the 109 manoeuvre as you wish. If maximum elevator input is harsh and sudden, the plane will start swaying around and enter a flat spin. The aircraft can quite easily recover from a flat spin by fully deflecting elevators downward and rudder to the opposite side of which the plane is spinning, and wait until it starts a dive and gather some speed to pull up.

If you want to engage heavy aircraft, it is best to bring the 15 mm gun pods to maximise your damage output. However relying solely on the one MG151 cannon might also work, but that requires more professional evading, aiming, and a few more shots. Against well-armed targets (eg. B-25) you should perform deflection shots to minimise the time you are exposed to their gunners, whereas against well-armoured aircraft with average/no defensive firepower (eg. early IL-2), tailing them may get the job done quicker. With the powerful mineshells, 1-3 passes are enough to destroy any aircraft.

In real life the flight characteristics of this plane were remarkable, the F model is considered the pinnacle of Bf 109 development, having the nicest flying characteristics of all versions. It has empty weight of 2,390 kg, and a gross weight of 2,900 kg. Powered by a 1,350 hp the Daimler-Benz DB 601E inverted-vee engine the BF 109 F4 had a power to weight ratio of a giving of 0,46. It reaches a maximum speed of 624 km/h (388 mph) and an impressive rate of climb of 3,000 m (9,845 ft)/2.6 min. It also had a high ceiling of 12,000 m (39,375 ft), but a low range of combat of 850 km (530 mi) with a drop tank limiting its usefulness as a local high altitude interceptor. In real life this plane although impressive had its limitations, it could do well vs any allied fighter below 6,000 m and above 3,000 m. It could out turn a P-51D and out-climb it but it could not out zoom climb, outrun or out dive a P-51D or a P-47D at high altitude. We have to remember that the Franz (F version of 109) appeared because the Spitfire MK.V was performing better than the Emil version the BF 109 E in the cross Channel duels after the Battle of Britain. The F version regained the edge over the Spitfire MK V at high altitudes. The 109 faced in the first year of the Soviet invasion a massive score as they faced outdated soviet aeroplanes like the I-16s but also performed well against the Lagg-3s and Yaks-1. The F model improved in power and speed on the G1 Gustav version with a 1,475 hp DB 605A Engine entering combat on July 1942 but it had not improved handling characteristics over the F model.