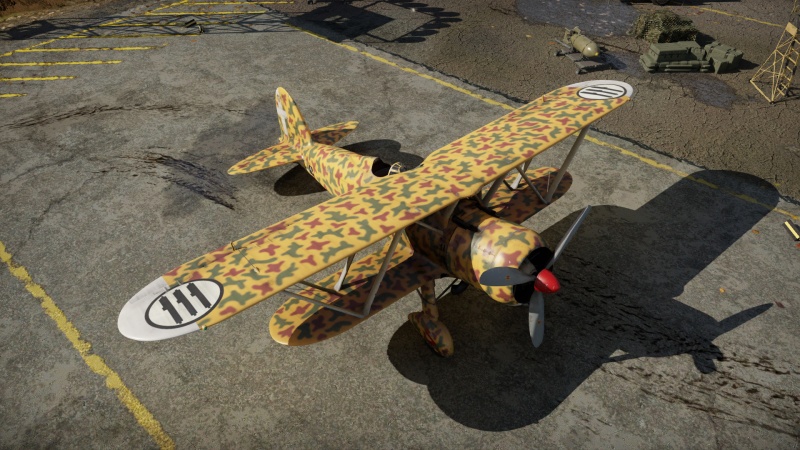 The ▀CR.42 Falco is a rank I German biplane fighter with a battle rating of 1.7 (AB) and 1.3 (RB/SB). It has been in the game since the start of the Open Beta Test prior to Update 1.27 in the German aviation tree. In Update 1.69 "Regia Aeronautica", the CR.42, as well as the other Italian planes in the German tree, were moved to the new Italian tree, although it still exists in the German tree for those who unlocked it prior to the update.

The CR.42 is a rank I biplane in the "German" Italian line of fighters. It possesses exceptional manoeuvrability, speed, and durability, especially for a biplane. Armament is quite good as well, due to the Breda-SAFAT .50 calibre MGs. Due to its BR, the CR.42 gets thrown with the likes of P-36 and LaGG-3 fighters. As such, the majority of aircraft the CR.42 will engage are faster, and more heavily armed. The best bet for survival, and securing kills, is to climb to about medium altitude and lure fighters into turning combat. An overwhelming majority of pilots are unwilling to run from a lowly biplane, allowing you to score critical damage before they realise that they have expended all their energy and must extend away from you. By that time, the damage is usually severe enough that they cannot accelerate away from you quickly enough to escape further damage.

For the armament, the same applies to all other Italian aircraft; generally, you want to use "Tracers", "Anti-air" or "Stealth" belts since they deal the most damage. Shell velocity is low, hence they suffer above 300 m, so only fire at or below that range for best effects. Furthermore, much like the other Italian fighters, the armament is woefully inadequate to deal with bombers, hence it is best to avoid them entirely, or focus on taking out the engines. The only exceptions are the very early biplane bombers, such as Swordfish, Po-2 and other light bombers.

As one of the last generations of biplane fighters, the Falco incorporates many advantages , but also disadvantages of said built. Notably a low stall speed, predicating it for Turn Fights. Climb speed is good to great, but cannot compare to many later fighters (Rank II). Another advantage gained is the relatively high break speeds of ~570 km/h IAS and the late lock up speed of 450 IAS for the elevator. The top speed is good for Rank I, but only reached after a short dive and quickly dwindles with damage received.

Biplanes by design have a lot of surface and consequently have plenty of aircraft to be shot at. This makes them feel more vulnerable than they really are, although again: They are fairly big, hard to miss targets, so the feeling is justified. Even more so as the fabric skin is easily damaged by small arms fire. The change to a aluminium monocoque fuselage design was linked with an increase in armament size for a reason. However, here lies a great advantage: many explosive triggers and fuses have their detonation sensitivities set to metal skins, not fabric ones, so they may just whizzle through your craft, leaving only two 20 mm sized holes.

The center lined armament is always a great advantage. However compared to other nation's fighter crafts with their fast firing 7.7 mm machine guns, the Breda's slower rate of fire offsets the gained advantage in calibre size and explosive ammunition (IAI).

In AB, the CR.42 is nothing more than a point-and-shoot arcade-style plane. There is little skill involved at these early rank matches. Therefore turning is the most appropriate tactic. However, due to the high climb rate, Boom & Zoom can be effective, as most monoplanes cannot nearly climb as fast.

As in real-life, the Falco faces off advanced mono-wing designs. While a grim view at first the CR.42 is the pinnacle of biplane evolution, only rivalled by the up-gunned Chaika series. Common opponents are faster and have a superior armament. However, the CR.42 has got traits to counter. It is immensely agile, and can easily out-manoeuvre any monoplane in rank I. Turning is thus an appropriate tactic for the CR.42. Due to it being a biplane, the Falco can also be used to effectively rope-a-dope enemy aircraft. Stall fighting is one of the strongest play styles, albeit the slowest and hardest to master.

Even Boom & Zoom is feasible, as altitude can be gained quickly; however, the lack of cannon armament forces the pilot to use significant trigger control as well as aiming when diving and attacking opponents at a lower level. If Boom & Zooming, watch your speed in a dive: instability sets in around 450 km/h (280 mph).

The Breda SAFAT .50 calibre MGs are actually very effective for their battle rating. Tracers are by far the best belt for these main armaments, due to the presence of entirely API-T rounds, which easily set fire to enemy planes and provide good penetration and damage capability. Due to the MGs being placed in the centre cowl, they provide heavy damage when the fire is focused on your opponent's wings or engines.

Unfortunately, MGs, in general, are ridiculously weak against bombers.

Versus other biplanes, the Falco can rely on its top speed and should combat them in the very same fashion monoplanes use to fight them off. An exception to this rule is the aforementioned Chaika, which is in most aspects on par with the CR.42. Against this Soviet fighter, either scissors or careful turn fights are advised.

The CR.42 was Fiat's attempt at modernizing their CR.32 design, which was deployed during the Spanish Civil War with great success. The new fighter would be of all metal construction, with Fiat's new, homegrown A.74 supercharged radial engine. The result was a fast, accurate, and manoeuvrable platform, that, while outdated at the onset of World War Two, would be almost the pinnacle of biplane design.

Early in the war, CR.42s were used with some success as escorts, night fighters, and even interceptors. Against the early Hurricanes and Spitfires, Italian and German pilots both were delighted to find that the manoeuvrability of the Falco put it, at the least, on par in a dogfight. However as the war dragged on, and enemy aircraft became faster, the CR.42 was relegated to night harassment, light ground attack, and sparingly used as night fighters.

The CR.42 is also credited with the world's last aerial combat biplane kill. A group of CR.42s based in Croatia under the command of "Nachtschlachtgruppe 7" were directed to Grabovica Airfield for a strafing mission. However, the flight was redirected at the last moment to a harassment mission northwest of Sisak, where they were intercepted by P-38s of the 14th Fighter Group. Three Fiats were lost for two P-38s, one of which was claimed by an unknown German pilot.

Late in September 8th, 1943 and with the armistice in place, the Luftwaffe absorbed most of the "Regia Aeronautica" aircraft, including several CR.42s. [40] Meanwhile, the Germans had taken control of the industry in Northern Italy and thus ordered Fiat to build another 200 CR.42LWs (LW = Luftwaffe). These were intended as jamming aircraft for night incursions and fighting partisans. Some of the confiscated Fiats were classified as training aircraft.

One of the German units that flew the CR.42 was the "Nachtschlachtgruppe" NSGr. 9, stationed in Udine, whose task was to fight resistance fighters in the Alps, Istria and Croatia. The first "Staffel" received her Falcos in November 1943 and left in January 1944 to the airport of Caselle near Turin, to fight partisans in the southern Alps from there. At the end of January the No. 2 Graduated CR.42, pilot training took place near Venaria Reale. After the Allied landing in Anzio, these two "Staffel" operated from Centocelle airport near Rome. Operations were flown over the south of the "Regione" Latium mainly on moonlit nights. NSGr. 9 attacked the Allies near Monte Cassino. Although the CR.42 performed well as a light bomber, NSGr started with nine, though gradually switching to the Junkers Ju 87D "Stuka". The second Staffel kept her double-deckers until mid-1944, on May 31 she had 18, of which 15 were deployable.

Due to the Allied bombing of the Fiat factories in Turin, only 150 CR.42LWs were delivered, 112 of which became operational. Incidentally, "Jagdgeschwader" JG 107 also used the Falco, mainly as a night fighter, fighter-bomber or as a training aircraft. The German student pilots nicknamed the plane "Die Pressluftorgel" or "the air pressure organ".