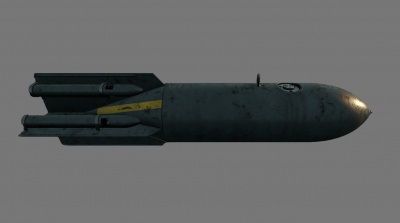 The SC50JA (50 kg) or Spreng Cylindrisch is a German general purpose high explosive (HE) 50 kg bomb. The -Ja mark indicates this bomb comes from the Group I series of SC50 bombs.[1] The SC50JA is a one-piece drawn steel body with a sheet steel tail cone attached by eight screws. The bomb can be suspended in one of two ways, either horizontally or vertically by the use of one eye-bolt lug mounted on the side and another mounted in the nose of the bomb. This version of the SC50JA does not feature a Kopfring or an anti-ricochet plate welded to the nose which ensures the bomb detonates on impact instead of excessive penetration of land targets or potentially skipping on water before exploding.

The German bomb sets itself aside when compared to similar bombs of other nations as it does not utilise either a nose or tail fuse to arm and detonate itself. Instead, it employs an athwartship fuse pocket which extends the entire width of the bomb with a single weld placed opposite of the fuse pocket opening to secure it in place. The tail cone of the SC50JA featured in War Thunder is a sheet steel cone, and four fins which are unbraced that is they are not supported with either tubular struts or a cylindrical strut ring.

The SC50JA is found on many different aircraft such as early war fighters and light bombers. Two eye-bolts were outfitted on the bomb, one in the sidewall for horizontal mounting on external aircraft pylons or in some bomb-bays and one eye-bolt was screwed into a threaded socket in the bomb nose allowing for the bomb to be mounted vertically in a bomb-bay.[1] Bombs mounted vertically in a bomb-bay conserved space allowing for more bombs to be installed, and upon being dropped, the bomb fins righted the bomb pointing the nose to towards the ground.

Bombs carried externally on German aircraft are typically painted sky blue to match the underside of the plane and to also make it more difficult to see from the ground when the aircraft is flying. Yellow stripes were painted down the tail cone in between each of the fins. Markings stencilled onto the bomb included bomb grade (Bi, I or II), mark (J, Ja, JB, JC, J/2 or L) and could also include the type of fuse, type of explosive, serial number and other various acceptance information.[1] 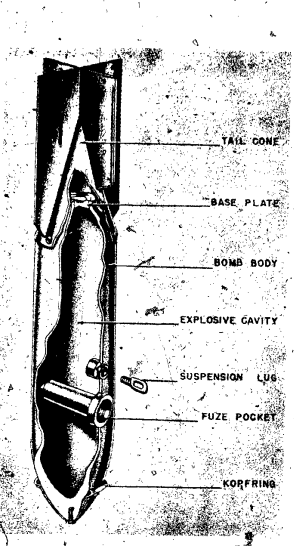