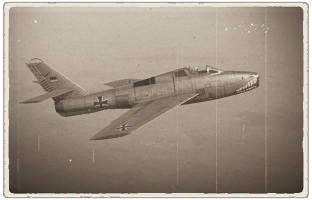 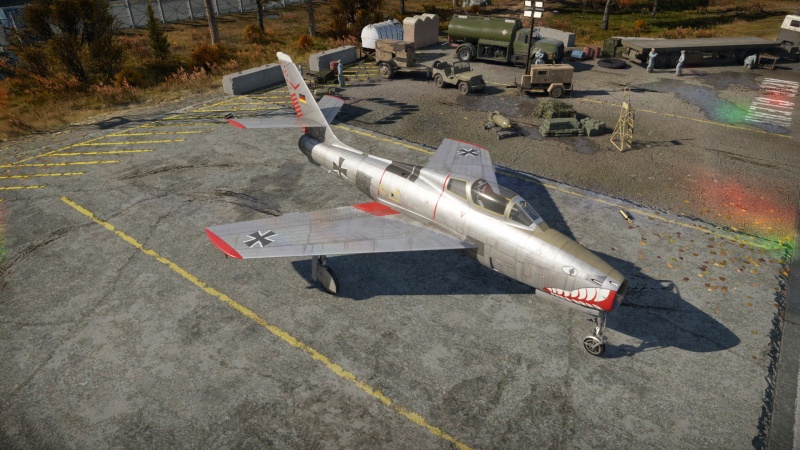 The ◄F-84F Thunderstreak is a rank V German strike aircraft with a battle rating of 8.7 (AB/SB) and 8.3 (RB). It was introduced in Update "Hot Tracks".

For modifications, as with almost all jets in the German tree, performance and survivability mods should be priority, except for the booster which really is not all that necessary and lends itself to more wing rips. G-Suit is a must. The six .50 caliber guns are accurate enough baselines as is the ammo, so go for the bombs and/or rockets next.

The F-84F (Germany) can be outfitted with the following ordnance presets:

The F-84F gets a bad rap, but it is a surprisingly fun aircraft to fly, more so once spaded. The air spawn is a big help in grinding up the aircraft modifications. Until the bombs are unlocked, use the advantage of the air spawn to climb and look for bombers. If no bombers are present, look for fighters engaging friendlies.

Keep the F-84F's speed around 700 km/h when climbing. The aircraft has relatively good dive acceleration and top end for its BR. This makes it a natural for Boom and Run tactics. Make sure the plane is set up so the run is either toward the airfield or friendlies so that any chasers will be picked off by allies and or the airfield's anti-air defenses. Try to engage at as close to 1,000 km/h as possible and do not try to turn if the target goes evasive. This aircraft has terrible acceleration, so it is important to keep the F-84F's speed up. Quite often the F-84F will get chasers with AIM-9Bs. Keep a look out for them and use occasional hard manoeuvres to break lock. Fortunately, it does not take much to break lock of the AIM-9Bs.

For the payload usage, the rockets, though inaccurate, are still fun to use en masse against targets, especially the Mighty Mouse rockets with a total of 42 rockets. However, the drag from the Mighty Mouse launchers is a problem. For bombs, the F-84F can effectively base bomb at the BR with the four 1,000 lb Mk 83s and be able to engage unsuspecting targets during the return to the airfield. Just remember, no turn fighting. When attempting to dive-bomb targets, use the air brakes to be able to adjust the planes better during its descent onto the target. When all bombs are expended and the F-84F begins their landing approach, use the air brake to help decelerate the plane to a manageable landing speed for the gears and flaps, then rely on the drogue chute to stop the plane on the airfield.