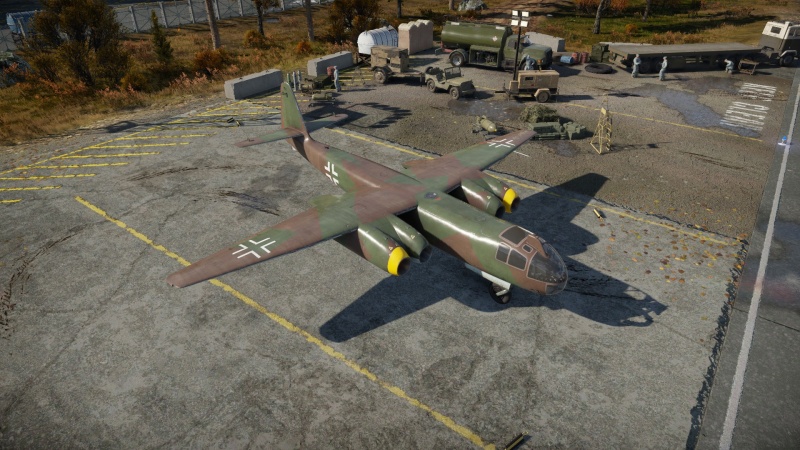 Climb rate is great even when stock. Combining the +3,500 m first spawn altitude and nice climb rate, the Arado Ar 234 C-3 is a great choice for bomber players. The dive speed is incredible and together with perfect energy retention, you can reach very high speeds in a matter of seconds. There is no WEP, however, but that's not very important.

Landing is not hard, but a is little dangerous. You can land after a dive, as well as when slow. Landing at low speeds is really easy, but here are the steps when landing after a dive:

The Ar 234 C-3 can be outfitted with the following ordnance:

2.2 - Search for enemy targets
Once you have dropped your bombs, you can turn your sights to enemy aircraft; the Arado C-3 is quite capable as a fighter, especially in comparison to other German BR 7.0 jets. It doesn't suffer from the same issues as the Me 262, which lacks in power and once it loses energy, often struggles to regain it, or the Ho 229, which can rip its wings very easily in high-G manoeuvres. With the Arado, you won't encounter these kinds of problems, providing you don't attempt to turn fight. The Arado C-3 has the best climb rate of any BR 7.0 German jet. It also possesses a roll rate to rival the Me 262, so with your 4 powerful engines, you have everything you need to take on other jets. As such, once you've finished your bombing run, turn and climb towards the battlefield, and try to maintain altitude above other jets. Once you're reasonably high, pick vulnerable targets and dive in for a pass, taking a shot at them and then moving away to retain your energy. Avoid exceeding 750 km/h when stock, as the dive can become increasingly hard to slow. Once all modifications have been researched, however, the aircraft provides a reasonable amount of additional leeway before it encounters issues. If everything falls apart and you find yourself with fighters on your tail, try to keep accelerating if possible and try to lure the enemies toward your own teammates so that they can assist you.