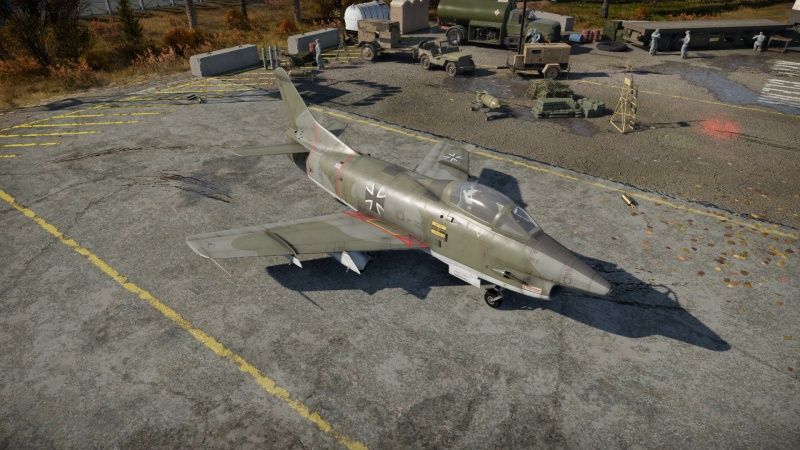 A mid 1950s transonic fighter (< Mach 0.90) with ground attack abilities. Very manoeuvrable, great acceleration and heavy offensive armament make the G.91 an excellent rank V aircraft. Unlocked after the Horten 229 the player should already be well acquainted with the appropriate play style for the G.91, being an all-around upgrade from the "Flying Wing" flying in fierce competition in the sky, it will face every sub- and transonic aircraft and while being a mid to top rank performance-wise.

There are few changes between the Pre-serie, R/1, R/3 and the R/4, and this guide can be considered universal for all listed aircraft.

The G.91 R/3 is a light weight strike fighter, its powerplant is the Bristol Orpheus MK.803 engine that can produce 2270 kgf of thrust. The level speed is quite good: it can reach 1,084 km/h at sea level, slightly better compared to the MiG-15bis and significantly lower than in the F-86 series or MiG-17. Its acceleration is good when the plane is in clean configuration without any additional armament under its wings, it is on par with the MiG-17 and better than in Sabres at similar battle rating. The Gina's climb rate is at most mediocre, while it is similar to the MD.452 or Yak-30, the other planes like the F-86F or MiG-15 will not have any problem outclimbing it, at sea level it is at most 39 m/s with full fuel tanks. Once the player decides to take any weapons like the Nord missiles into battle, it has a huge impact on its level speed, acceleration and climb rate, mainly because of the low plane's mass. This effect is much more noticeable than with Sabres. The engine can start overheating after continuous flying at max power (the limit is 15 minutes), lowering it to 95% should help with cooling it down.

Manoeuvrability of the G.91 is decent: the instantaneous turn rate is good, the plane can easily pull high G amounts even near transonic speed and it helps with pulling high angle snapshots with full real controls. The continuous turn rate is however mediocre, it will not be able to win any prolonged fight against a F2H or a MiG-15. Pulling high G amounts at low and medium speeds can also make it bleed a lot of energy, more than in the MiG-15 or the best Sabre versions. The rolling performance is outstanding like in the F-86 series, it makes the plane very good at performing defensive manoeuvres and effective the G.91's airbrakes can further improve it. The flaps have high speed limits and can considerably improve its turning performance. Overall the plane feels very similar to the F-86F series flight characteristics (the ones without wing slats) and both can use the same tactics and flying style.

In simulator battles, the plane is very hard to stall out: it will not start rolling even when the elevator is fully pulled. It may require some positive trimming at low and medium speed. When flying above 700 km/h the player should be very cautious of pulling too much, it is very easy to reach the G amount limit and break one of wings, especially during rolling and turning at the same time. This can be partially nullified by removing the New Boosters modification.

At its rank, there is little which cannot hurt the G.91. This is mostly due to the large calibres and fast-firing weapons found in the jet age, although the G.91 R/3 does not help this issue. The armour is enough to withstand the occasional tank light machine gun fire but otherwise will only protect the pilot from shrapnel damage. Even though the centreline arrangement of all components proves to be quite survivable in combat, it does NOT lend itself for head-ons or prolonged chases. The former only leads to functional aircraft with a knocked-out pilot and the latter to the reverse, which was in all likelihood the intended design in real life. The aircraft cannot take damage very well; fuselage damage usually results in engine damage, while wing damage makes the plane unstable in turns and drains the acceleration.

Compressor > Boosters (don't equip them yet) > Engine > Both cannon upgrades > G suit + equipping boosters after researching. Why? Engine upgrades, because this jet lives by its T/W ratio. Cannons to make best use of its low RPG. New boosters are required to progress to T3 and help high-speed handling, however without G suit one is just a black-out earlier. Later frame upgrades for improved top speed, or survivability upgrades to prevent breaking in turns.

The G.91 R/3 (Germany) can be outfitted with the following ordnance:

Featuring a wide range of ordnance, the G.91 R/3 can be equipped for any role from ground to air combat, though it prefers air superiority.

The DEFA 552 is an excellent revolver cannon for air-to-air combat. With high velocity, devastating high-explosive rounds and fast-firing rate it can easily hit even extreme deflection or long-range pursuit shots. The only downside is the low ammo count of 125 rounds per cannon and thus having to resort to very short burst fires.

For air-to-ground purposes, the G.91 R/3 is similar to the G.91 pre-serie and G.91 R/1, both its predecessors, in loadout options sharing the same FFAR Mighty Mouse rocket option as well as the choice of a pair of 500 lb bombs. However, the R/3 has an additional and unique option; the AS-20 Nord air-to-ground missile, with a reasonable penetration value (83 mm RHAe) but incredible warhead size of (just under) 30 kg of TNT. Skilled use of the missile can allow for a more accurate fire at longer ranges especially versus more dangerous vehicles like self-propelled anti-aircraft guns.

Achieving air superiority should be the primary task for all G.91 pilots. However, the G.91 R/3 excels in a support role, especially in uptiers, where most of enemies can simply run away from it. To do this, take 9 min of fuel to boost its acceleration and climb rate (the low ammo count will discourage prolonged air combat anyways), and after takeoff climb at around 8° (680-700 km/h). When the first enemies engage with allies, go over them and find target with low energy state and destroy it. Do not chase lonely planes, as although enemy might look like easy 1-v-1 victory, the low top speed makes it very hard to catch somebody. Try not to engage in a prolonged dogfight, because the G.91 R/3 has rather poor energy retention and when caught slow even good acceleration won't save the plane. Also, keep in mind that the G.91 R/3 has poor low speed performance because of swept wings and lack of leading edge slats. In prolonged turn fight, one may find themselves losing even against jets like the MiG-15. Another thing is do not air brake. The G.91 R/3's below average energy retention combined with overall good manoeuvrability makes it easy enough for pilot to evade enemy, and in combat, even the good acceleration is not enough to regain the lost speed.

Destroying bombers and attackers is also a feasible option thanks to the powerful cannon armament. However, the lack of durability and low ammo count make this rather a secondary task.

Ground attack should be done only in Ground RB, since G.91 is a typical fighter. Fortunately, it gets access to 4 x AS-20 guided missiles that are deadly.

MiG-15/17, J32B. These jets have higher T/W ratios, and better acceleration. When engaging them, try to lure them into a dogfight; however beware, as the MiGs can outturn you at low speeds. Avoid going vertical at all costs.

Hawker Hunter, Supermarine Swift, Vautour. These aircraft have great energy retention and top speed. Generally avoiding attacks shouldn't be very hard, but downing one will be a challenge. Leave them to your faster team mates and watch out for their rockets.

Other G.91s. When there is G.91 on your tail, there is not much you can do. Try to force an overshoot, but do not airbrake as good pilot will go vertical and destroy you.

The G.91 Small Sabre entered service with the Luftwaffe in 1962 after winning the 1953 NATO light tactical support aircraft competition. This competition had called for a fighter which could carry 452 kg of ordnance, patrol a combat radius of 180 km assuming 10 mins over the target, average cruising speed of at least 705 km/h and Mach 0.95 capability. It also had to be fully operational on grass or other types of unprepared runways, with a take-off distance of 1,100 m. The R/3 was the Luftwaffe's version of the G.91, but with more powerful armament, two wing points for suspended ordnance and better avionics than the Italian Air Force's R/1s. Fifty R/3s were built in Italy starting in 1959 and another 294 were license-built in West Germany. The Luftwaffe also received another 50 of the very similar R/4 aircraft after orders for Greece and Turkey fell through. The Luftwaffe also had 66 T-3 two-seat trainer models built of which twenty-two were built in Germany.