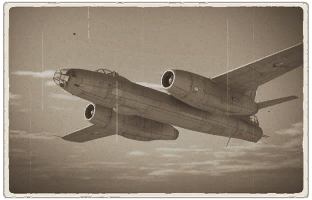 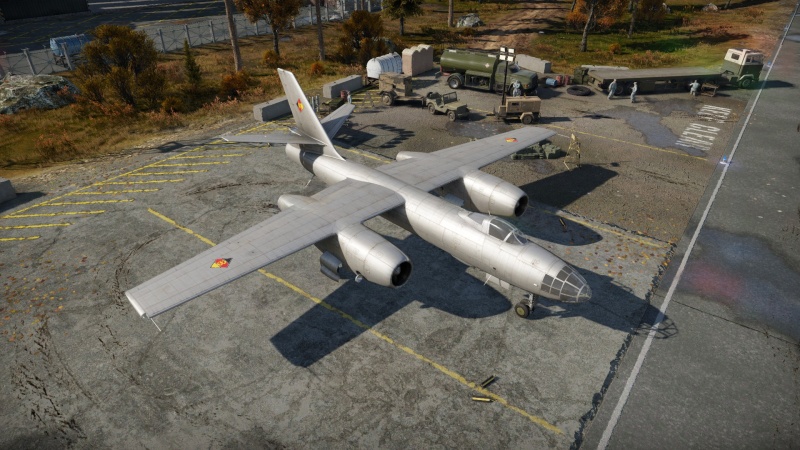 The ▀IL-28 is a rank V German jet bomber with a battle rating of 8.0 (AB/RB/SB). It was introduced in Update "Raining Fire".

The IL-28 (Germany) can be outfitted with the following ordnance:

Unlike its American and British counterparts, the IL-28 features a heavy-hitting defensive armament of two 23 mm NR-23 cannons mounted in the tail barbette. This turret setup is unique in that it features an extremely high degree of manoeuvrability, able to almost fire straight up and down. This single aspect of the IL-28 is what truly makes it a legendary aircraft, especially among the War Thunder community. Often described as being able to fire "23 mm lasers", the IL-28's tail cannons are capable of equipping belts composed entirely of destructive fragmentation incendiary tracer ammunition. The NR-23 cannons also fire unusually quickly, which makes the aircraft's one-second burst mass very high. This makes the aircraft more than capable of defending itself, an invaluable asset in Rank V battles. There is also 102 mm glass in front of the tail gunner, making it quite hard to knock him out. The IL-28 also wields two of these weapons in forward-facing positions under the nose, which allows the aircraft to destroy softer targets like AAA and artillery.