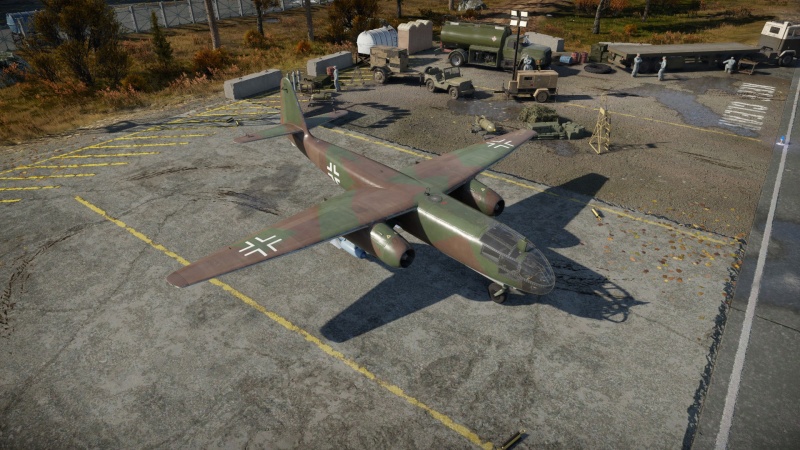 The Arado Ar 234 was the world's first ever jet bomber and the second jet-powered aircraft to go into service with the Luftwaffe. The Arado showed great potential but was produced too late in the war and in too little number to have any major effect on the outcome of WWII. Despite its great speed and high-altitude performance, the Ar 234 was not invulnerable and some fell prey to the guns of slower Allied fighters. One major problem for the Ar 234 was its poor backwards visibility, as well as its lack of manoeuvrability at low speeds. The Ar 234 B-2 had a maximum bomb load of 1,500 kg (3,300 lb). Usually it carried it as three 500 kg (1,100 lb) SC500K bombs, one under the fuselage and each of the engine nacelles. Alternatively, it could also carry a single 1000 kg (2,205 lb) SC1000 or SD 1,000 'Hermann' in place of the smaller bombs. Inside the cockpit, the standard equipment included a Patin PDS autopilot and a complicated Lofte 7k tachymetric bombsight. Other modifications of this bombsight can also be found on the Junkers Ju 88 (Lofte 7, 7C, 7D and 7H), Heinkel He 111 H-5 (Lofte 7A) and He 177 (Lofte 7B and 7C), Focke-Wulf Fw 200 (Lofte 7D and 7H) and the Messerschmitt Me 262 A-2a/U2 (7H, 7K and 7K-2). Both pieces of equipment could be used simultaneously.

The plane is extremely easy to fly, both in Realistic and Simulator battles. With payload attached, the speed must be monitored carefully, especially if you are taking off from a short runway. Dive bombing and low altitude bombing is not only possible, but also quite easy thanks to very good elevator control and rudder authority even at considerable speed. Landing is somewhat rather easy compared to other planes of same size and class thanks to very robust landing gear structure and good flaps characteristic.

The Ar 234 B-2 can be outfitted with the following ordnance:

Due to the limited payload of only 3 x 500 kg bombs, this plane is most effective as a fast tactical bomber. It is very effective against any ground unit in-game, reliably taking out heavy tanks, pillboxes and destroyers. This can be done with a fast in-and-out approach, diving to do high speed, low-alt run over the ground targets then running to safety and then climbing while bombs reload to be able to repeat. If an enemy fighter does manage to catch up to engage the Arado, then you must resort to using the 234's excellent manoeuvrability to evade enemy fire until you can reach safety or help arrives. For ground attack, the 3 x 500 kg payload is the best option, as each is capable of destroying any individual ground target.

Some would advocate side-climbing and then high-alt base bombing. This may help ensure survivability, but in Arcade mode, the total bombload is too small to be very effective. While destroying the mini-bases may be useful, attacks on the airfield would be insignificant. In base-bombing roles, you may find that the upgraded bombload is worthwhile, as it has slightly less drag and slightly higher total TNT content within its bombs.

Fast tactical bomber. Go in, destroy the target, either two tanks/pillboxes, or one strategic bomb-zone target. At this point the pilot has several options:

The prototype used a wooden tricycle trolley for take-offs and a singular skid for landing. Also, since the plane was so fast the only times it would be vulnerable was during takeoff and landing. The design soon moved to conventional landing gear after to trolleys were quite risky and during landings when the plane would tilt over at low speed. Also to accommodate the tricycle landing gear the fuselage was made wider. Plus, an autopilot system was installed so that as the pilot was on his bombing run he could concentrate on his bombing targets. One of the other problems that were worked around was adding Walther 109-500 RATO motors (Rocket-Assisted Take Off) were used to shorten the aircraft's lengthy take-off run.

The pilot controlled the plane from the forward nose compartment which had an incredible amount of visibility, though the position made the 6 o'clock position behind the pilot extremely vulnerable. So a periscope was installed to counter this disability. The periscope would have doubled up as a sight for the guns on the tail that were meant to be installed but never were. Also, it could serve as a dive-bombing sight. The control yoke was moved aside inside the cockpit so that it could be moved out of the way when on the bombing run. When this was moved out of the way the pilot looked into a bombsight located in between his knees. Like many German aircraft, the main controls and gauges were colour-coded for easy recognition by the ground crews.

The main unit to use this aircraft in combat was KG76 who were based in Norway, though other units also used this aircraft. This aircraft had limited usefulness as fuel and engine production was what would send it out of combat at the end of the war.[1]