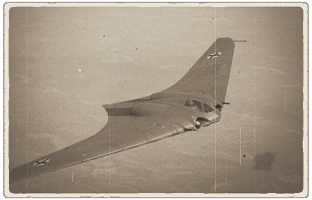 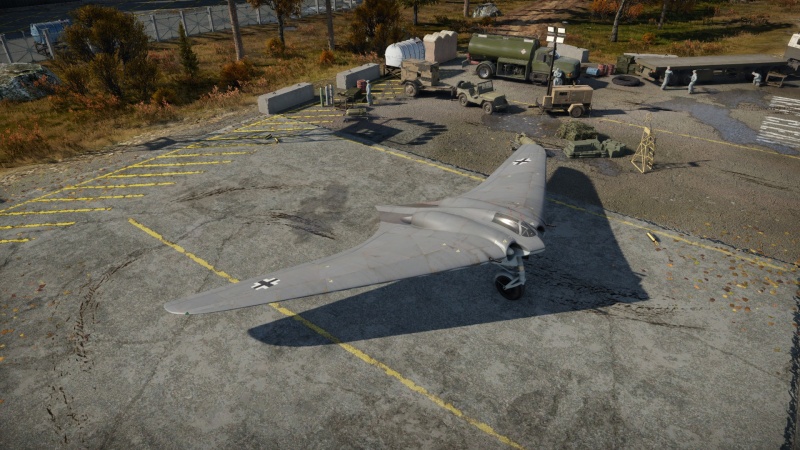 Its single wing design allows for amazing manoeuvrability despite its weight of up to 8 tonnes, when equipped with full fuel load. This is, however, the Horten's literal downfall; the weight. Its acceleration is awful, even for jets. But the energy retention is great and climb acceptable. With that in mind rule number one of jet battle comes into play: do not turnfight! The 229 will tempt anyone though. The low wing loading for a jet and even some piston planes allows for tight turning circles. Being heavy also allows to keep that velocity well in the initial turns, but with the inability to regain that speed afterwards... leads to a flaming wreck thanks to an opportunistic enemy. The classic dogfight is thus only for emergency situations!

Perhaps the most dangerous enemy of the Horten 229 is the F-84 Thunderjet. Since the Thunderjet gets an air spawn it already has all the energy it needs to get around the map quickly. There are occasions when players spawn in late, only to be strafed by an F-84 Thunderjet on the runway. The Ho-229 is decent at accelerating once up to about 550 km/h, past that point, the Ho 229 becomes a V2 rocket in terms of acceleration until about ~750-800 km/h, then there will be a hard time accelerating again.

In the 1930s, the Horten Brothers were really interested by the concept of "flying wing" for the potential of drag reduction.

In 1943, Marshal Hermann Göring requested a plane that could carry a 1,000 kg bomb load to a range of 1,000 km at a speed of 1,000 km/h. Because jet engines of the time had poor efficiency, the Horten Brothers thought putting them in a flying wing, which had reduced drag, was the solution.

The Horten Brothers proposed their project for a bomber, Ho IX, but the Reichsluftfahrtministerium (RLM) thought the plane would be better as a jet fighter than a long range bomber and requested that two MK 103 cannons were mounted. The result was the prototype Ho 229.

Only one example of a Ho 229 V3 was in final phase of assembly at the end of the war, and sent on to the United States by the allies.

Originally the V3 was intended to have the Jumo 004C jet engines, these weren't ready though and the Me 262 A's 004B was installed. The final production version would have had the ability to load bombs, switch the main armament to four MK 108 and the pilots were to be equipped with the Draeger pressure suit (G-Suit).