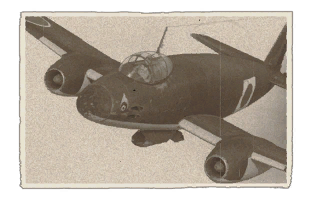 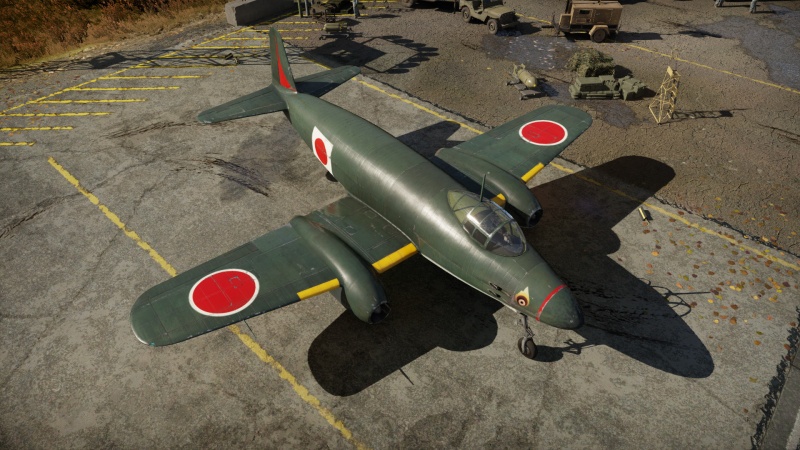 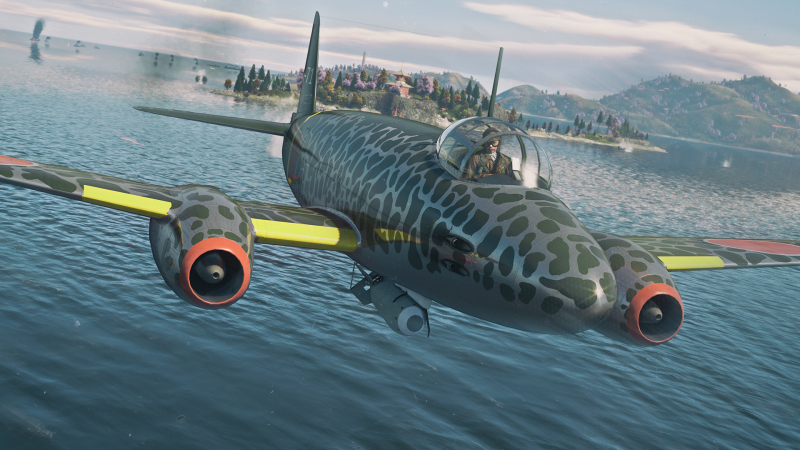 Even though the R2Y2 is able to equip an 800 kg bomb, it wields a powerful set of 4 x 30 mm Type 5 cannons, mounted in the nose. This aircraft trio is similar to the Me 262 series as they all lack an engine or propeller in the front of the plane. Thus, the R2Y2 and its German counterpart can wield an impressive set of cannons. The R2Y2 series wields four Type 5 cannons with a large ammunition pool. Although the rates of fire of these and the Mk 108's on the Me262 are comparable, this fact of a higher ammunition count allows the R2Y2 to be able to destroy more aircraft without having to return to base. In arcade battles, having a large ammunition pool is also useful as it will often be unnecessary to reload. 4 x 30 mm Type 5 cannons with a ammo load of 600 rounds (150 rounds per gun) means the R2Y2 is effective at almost any role you chose to play it as. As an attacker or an interceptor, the R2Y2 is an effective multi-role aircraft for the Japanese at era V.

The R2Y2 is best utilized as a medium-altitude fighter in all game modes. Due to its lacklustre acceleration, like many jets, gaining airspeed as early as possible is crucial. Once the R2Y2 pilot loses his or her speed, they are easy prey for faster-accelerating propeller aircraft. It is important to always have a high speed when attacking enemies as otherwise they will often be able to slot in on your tail in a matter of seconds. This short time can be a matter of life or death as many fast-turning propeller aircraft such as the Spitfire wield impressive armaments with high burst masses. However, these advantages can be nullified once the R2Y2 pilot has the ability to dive away at high speeds.

If followed by a jet fighter or heavier propeller-driven plane, evading enemies with the R2Y2 is often easy. Though its maximum speed is lower than that of, say, the F-80A-5, it is faster than certain early jets like the Meteor F Mk 3, is a great climber, and has a low stall speed. It can turn better than many jets it faces as well. Needless to say, if an enemy is on the jet's six, the R2Y2 pilot can always call for teammate assistance. Not only can one keep the enemy greedy and focused on his or her tail, but this pilot can also "set up" that enemy for a teammate to destroy. If found alone, it can be possible to catch propeller planes in a "speed trap" where once you start to outrun the enemy you pitch up to gain altitude. Once the enemy propeller stalls out, dive on them. If the first pass doesn't result in a massive fuel fire and explosion, set up the same approach as before. Even if the propeller plane has the ability to outmanoeuvre the R2Y2, it is still very daunting to have to dodge an aircraft armed with four 30 mm cannons.

The R2Y2 can also be beneficial to any battles as a ground attacker. Its 30 mm Type 5 cannons have the ability to equip armour-piercing rounds which are capable of destroying light tanks, medium tanks, and light pillboxes, among other targets. This, coupled with the single 800 kg bomb, can cause some serious damage to the opposing team.

The V1 variant of the R2Y2 featured a somewhat conventional design for an early jet aircraft in that it featured two engines (due to the low thrust and power of early jets) mounted in pods, with one under each wing. A similar configuration to that featured on the Me 262 Schwalbe, Gloster Meteor and Nakajima Kikka jet aircraft. All 3 variants feature a pair of Mitsubishi Ne-330 turbojet engines. The V1 is the R2Y2 in its most basic configuration that was very much the rushed conversion from the R2Y1. Due to the limited time frame on the project and the severity of the situation facing Japan in 1945, the V1 was chosen out of the 3 proposed R2Y2 variants, due to the lower cost to produce it.