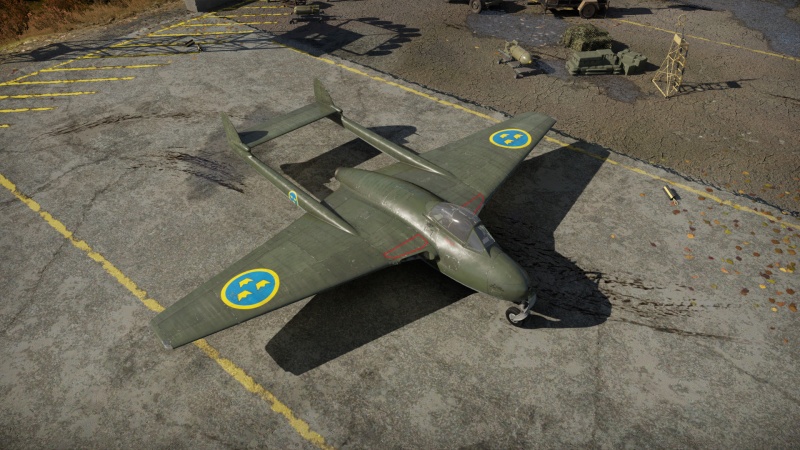 The J28B is an early Cold War jet known as the Vampire FB 5 in the British tech tree. It was ordered in large numbers by the Swedish air force to leap into the jet age. The Vampire family is known for its great dogfighting capabilities, meaning the J28B can comfortably fend off several opponents at once if controlled by a skillful pilot. This aerial performance is given at the cost of engine power.

The J28B performs well at low altitude where it easily outturns most opponents it faces. Thanks to the excellent flaps and air brakes, a pilot aware of his/her energy can fend off anyone that picks a fight. The flaps can be utilised at various speeds to outturn any enemy at any time. Dogfights are where the Vampire platform shines, it is a highly effective fighter with its relatively light airframe and smooth controls. Although the power is lacklustre, a pilot aware of his/her surroundings will have no difficulty avoiding incoming enemies. This lack of engine power will, however, cripple the J28B when it comes to acceleration. A Vampire tends to lose a lot of speed when engaged in turning. So gaining it back to defend itself against new opponents becomes a hassle. And even if a J28B pilot manages to get their speed up, catching a target will be close to impossible with a slow top speed. This lack of power hinders the J28B in many ways, mostly related to energy. This is why "Vamp" pilots are advised to climb at the beginning of a match, despite the lack of a decent climb rate.

The Aiming reticle of the Swedish m/51 rockets.

The J28B performs identically to the Vampire FB 5 which should not come as a surprise. The firepower is what makes them different, however. The J28B is outfitted with the Swedish Akan m/47B (short for "Automatkanon"), which is the Swedish designation of the British Hispano Mk.V, although the calibre and fire rate are the same, the burst mass is larger. This has to do with the Swedish ammunition. The Swedish ammo type contains more TNT and is fully tracer equipped, meaning stealth isn't an option. Despite this downside, the guns perform closer to the American AN/M3 guns instead of the British Hispanos, making the J28B the most effective Vampire in regards to firepower. The J28B is also outfitted with several types of anti-tank and anti-ship rockets. Despite lacking the large 1,000 lb bombs the FB 5 offers, the rockets offer a much different experience compared to the original model. The rockets fire one at a time held on by a Swedish rocket rack, pointing them further down than usual. The average pilot, especially the ones coming from the FB 5, will find this new placement tricky to get used to. But considering the single fire system, a skilled pilot might be able to rack up more destroyed tanks in ground battles compared to the FB 5. If this becomes too sufferable, however, it is recommended to use "Fire rocket salvo" instead to fire off two rockets at once, for a more traditional feel. It's not worth sacrificing accuracy for efficiency when it comes to rockets.

Armour found inside the J28B

The J28B has the same armour as the Vampire FB 5 as well as the Italian Vampire FB 52A. Despite being dangerous in a head-on due to the beefed-up guns, a J28B should never fully commit to a head-on engagement, the bulletproof glass will, however, save the pilot most of the time. The tail section is not easily saved though. The twin-boom makes it twice as likely to hit the traction of control surfaces. This leaves the J28B completely useless usually resulting in abandonment of the aircraft, which should be avoided at all costs.

The 20 mm m/47B cannons found on the A28B are fairly unique, as it's the only vehicle in the game carrying this specific version. The gun is identical to the British Hispano Mk.V found on the British Vampire. Ammunition count and fire-rate are identical, but the belt composition differs. While the British guns use shells that lack tracers, along with less explosive, the Swedish HEF-T, and AP-T are the only two rounds available, resulting in every round being visible. This can seem overwhelming, but considering the amount of damage the A28B deals in a single burst compared to the Hispano, the trade-off is worth it.

The A28B can be outfitted with the following ordnance:

The A28B is incredibly feared in ground-battles due to the devastating m/49A rockets it carries. These rockets lack a high explosive-mass, especially compared to high-explosive rockets similar to it, such as the British RP-3. However, the Swedish rocket works more in a shape-charge matter, giving it high penetration values, and post-penetration damage. This means the A28B is more likely to ammo-rack opponents than similar analogs, as the A28B can engage opponents from any angle it wishes

Although visually indistinguishable from the m/49A, the m/51 rockets are very different in behaviour from their older counterpart. These rockets are high-explosive, similar to how the British RP-3 behaves. The rocket lacks significant penetration, even when compared to the RP-3, making them quite redundant against tanks. They can be effectively used against lightly armoured vehicles, however, as the explosive spreads more towards the side rather than just forwardly. The rockets can also be used against aerial opponents, especially bombers. Since this rocket has a 10 m/s faster travel-speed compared to the m/49A before it, they're slightly more useful when applied against aerial targets, even if they're less than ideal for this purpose.

A J28B pilot should always be aware of his/her speed and altitude, or energy in more advanced terms. To avoid enemies with superior engine power using it as a boom and zoom target, a J28B pilot should use altitude to their advantage. Since the Vampire platform is bad at building up energy, the pilot should store as much energy as possible for when the battle begins. Before engaging targets, it can also be useful to always keep a speed of at least 400 km/h to limit the number of options an enemy has to counterattack. This also helps the J28B to swiftly turn around and begin a dogfight if the opponent commits to one. This play-style can be applied to every Vampire plane in the game since they perform mostly the same. The J28B has to watch out for Ho 229 V3 players, however, since they can outmatch the J28B in turning. A good way to counter the Horten is to make it bleed speed. Forcing it to turn once or twice and then extending away from the enemy.

A play-style close to that of a propeller-driven aircraft can be applied, where energy is the key to survival. The J28B has quite the firepower compared to the other Vampire models. This can reward players who can safely head-on from a distance and then avoid incoming shots from the enemy. This will usually result in a critical hit or straight-up destruction if the enemy doesn't also avoid. The fired rounds are quite deadly and require less gun-time compared to the British counterpart. This gives the J28B an overall higher chance of surviving since it can afford to spend less time on each target. A pilot comfortable with their aim will easily outsmart opponents and make them think twice before engaging in a future dogfight with a A28B.

The A28B is the ultimate CAS plane for Sweden at the BR range it sits at. The Vampire platform is incredibly manoeuvrable which allows for safe attacks against ground targets, and the high agility is incredibly helpful against propeller-driven opponents. Equipping eight m/49A rockets does hinder the performance slightly, but are one of the most lethal rockets found at this BR. Thanks to them being a tier I modification, having a potent A28B isn't difficult to achieve. Make sure to engage targets at low altitude, avoiding any form of SPAA, as the A28B is required to fly straight during approaches, due to the difficulty of aiming. Make sure to aim the m/49 rockets in tightly packed crew compartments, and ammunition stowage, similar to how you would typically fire a HEAT-FS round. This is why broadside engagements are more effective, as having a larger target profile allows for increased accuracy.

The rockets aren't the only thing the A28B makes use of. The 20mm cannons have plenty of ammunition and allow the plane to deal with SPAA from longer distances. The ground-targets belt penetrates most SPAA, allowing the A28B to save the m/49A rockets for tanks instead. The guns are capable of damaging engine decks, especially on tanks such as the British Centurion or German Panther. Against aerial targets the A28B performs ideal as always, damaging most opponents in a single spray. Always make sure to deal with these opponents first, as even if they pose no threat to the A28B, they most definitely threaten its teammates.

The Swedish air force carefully studied what was happening at the Fronts in WWII, and by 1944 it was already obvious that the propeller era was coming to a close. By early 1945, the Swedes had already begun a project to power the Saab J21 with a ramjet. However, it seemed this project would take far too long. By autumn of 1945, the J29 project was also beginning to take shape. But even this project wouldn't take to the skies until 1949, so a foreign design had to do until then.

The British de Havilland Vampire was one of the first jet-powered fighter planes to enter the market, and Sweden was very interested in this design. In early 1946, Sweden ordered 70 Vampire F Mk 1 models designated J28A, thus becoming one of the first customers of the Vampire. This version was mostly used as practice for the new era of jet-driven aircraft. But the Swedes became fond of the design. So when the export version of the Vampire FB 5 entered the market known as the Mk 50, Sweden was very interested and orders started in 1949. This version was to be known as the J28B or A28B depending on suspended armaments. This version differed from the Mk 1 by having a renewed, rounder tail section, and a lower placed elevator. The engine was upgraded from the RM1 to the RM1A that was now produced by SFA (Svenska flygmotor AB) in Sweden and delivered to de Havilland in Britain for installation. The main armament was also changed from the Hispano Mk II to the more potent Hispano Mk V. By 1952, 310 J28B Vampires had been delivered to Sweden. 12 of these would be rebuilt as a two-seat trainer, known as the J28C-3.