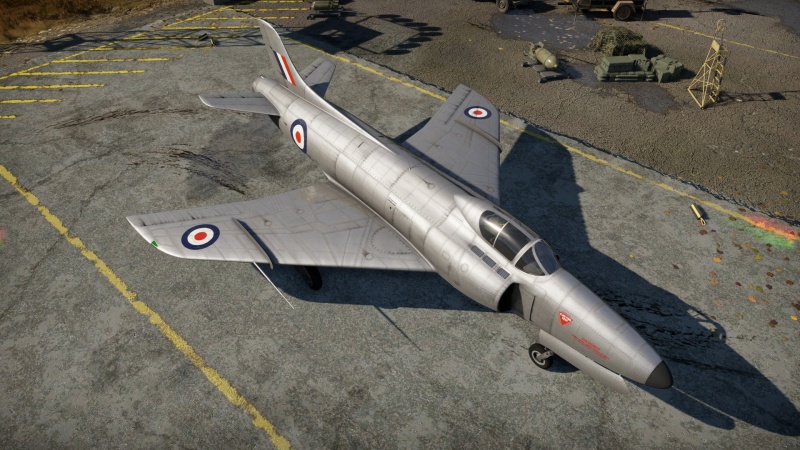 The Swift F.1 can be outfitted with the following ordnance:

The Swift is a British subsonic jet fighter. The aircraft is considered by some users to be a "Mini Hunter" as the Swift shares a lot of strengths and weaknesses with the beast.

This jet's strengths consist of good acceleration, climb rate and top speed, which if used properly can make it a brutal 'Boom and Zoom' aircraft, as even a short burst from the dual ADEN 30 mm revolver cannons will shred anything unfortunate enough to be in the way. The jet also has good energy retention, allowing it to make a 'swift' getaway if the pilot doesn't manage to kill their target, as even in a gentle climb it does not bleed speed as fast as other jets of its tier.

The main weakness of the jet is that it is not very manoeuvrable, meaning that if caught in a sticky situation, the Swift is unlikely to be able to out-dogfight its opponent unless the pilot is very experienced. Try to escape a dogfight before it begins, but if you are forced to engage, avoid throwing the jet into any sort of tight horizontal manoeuvres as there are very few aircraft the Swift will out-turn and you will end up losing any energy you may have had, becoming a sitting duck for whoever decides to claim the kill. Instead, when manoeuvring take advantage of oblique and vertical planes as you will have much more control over your energy, as well as making it easier to search for an escape route. If you manage to escape a dogfight, extend out using the Swift's acceleration and get some distance, then you can decide whether to re-engage. Also, be careful in dives. The Swift is a fast plane and as such, in a full-on boom dive from the heavens, you are likely to be going at around 1,100 km/h (700 mph) IAS, which is great for taking out unaware enemies who haven't seen you. At this point, however, the Swift is at its least manoeuvrable, at this speed turning and pulling up takes a very long time, and many new Swift pilots will find themselves embedded in the nearest hillside after a dive, take the time to learn the limits of the plane and know when to pull up. The Swift also has no designed air brake, instead the jet is equipped with the strongest takeoff flaps in the game, which still manage to hold together at the top speed of the plane, they do a great job of ditching unwanted speed, even in a steep dive, so use them if you feel you are coming in too fast.

To summarise, use the Swift as a 'Boom and Zoomer', avoid horizontal dogfights, watch your speed in dives, and make sure to keep an eye on your ammo count, do all this and you'll be sure to quickly get many kills under your belt.

The Swift F.1 is equipped with an AN/APG-30 rangefinding radar, located in the nose of the aircraft. It will automatically detect other planes within the scanning area and display the range to the closest target. It is linked with a gyro gunsight and can help with aiming at close range.

Nonetheless, the Supermarine Swift F.1 entered service with the RAF in February 1954, followed shortly afterwards by the F.2 variant. However, many of the aircraft's teething problems weren't resolved as a result of being rushed into production. This resulted in a number of accidents happening early on involving the Swift, leading to the aircraft being grounded for a time.