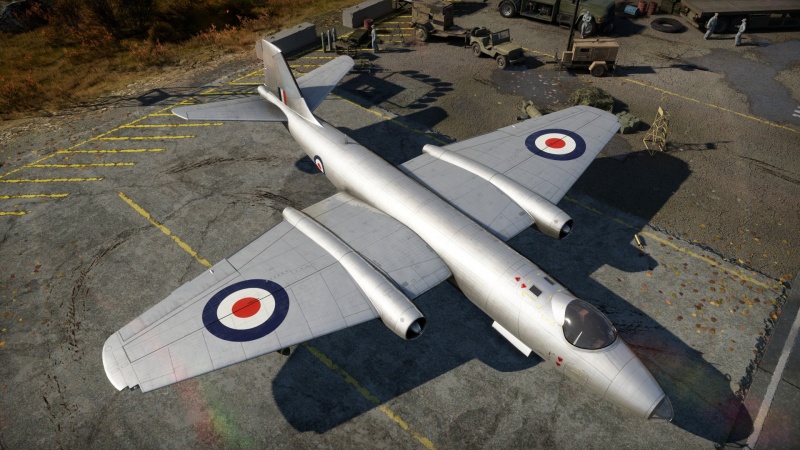 The Canberra B (I) Mk 6 is an interdiction model of the famous bomber, thus it is more suited for aggressive ground attack/interdiction roles by comparison to the B Mk.2 or B-57A models. Much like the B-57B, it retains its bomb carrying capabilities, but also features and impressive battery of armament consisting of 4 x 20 mm Hispano Mk V cannons. Not only this, but the B (I) Mk 6 has a 2,000-round capacity for these cannons, making it a truly formidable attack aircraft and also allowing for air-to-air combat with other aircraft. Unlike the previous B Mk.2 model, due to the inclusion of a gun pack to house the cannon armament, the B (I) Mk 6 features wing mounted pylons to carry similar ordnance options to the previous model of Canberra. This makes the B (I) one of the most effective and versatile attack aircraft in game due to its ability to switch from conventional bombing, to ground attack and also interception.

The Canberra B (I) Mk 6 can be outfitted with the following ordnance:

The Canberra B (I) Mk 6 can be played a few different ways. You can bomb the bombing targets as a bomber, but then you can use the plane to its full potential as a heavy fighter. The Canberra rolls decently when slow, but when you start to turn, the elevator will pull and the plane has a decent turning circle for its size. The 4 x Hispano Mk.V cannons are decently easy to aim as they are mounted on the underbelly of the aircraft. You have 2,000 rounds of ammunition which can easily deal with multiple targets with plenty of ammo to spare. The best way to play this aircraft is Boom and Zooming, where you dive on a target and have a gun run on them and after the run is over pulling off and going back up using your speed for altitude. The aircraft gets a bomber spawn which will spawn you at a high altitude and decent speed at the start of the match.