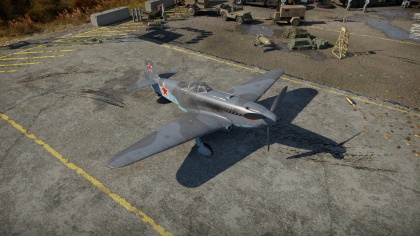 The Yak-9U is an up-engined Yak-9 equipped with the M-107A engine. It sports competitive speed, far above average turning and roll abilities, good acceleration, a high dive limit (by USSR standards), and keeps nice and crisp controls from speeds as low as 250 km/h to 750 km/h. At 4.3 BR, it is arguably the most underestimated vehicle rank-for-rank in game and is often skipped by players who view it as just another Yak-9.

At sea level the Yak-9U can catch most, if not all, planes at 4.3 BR, including the P-47 and P-51D. Beware, however, as the Yak air frame isn't particularly durable in a dive and will rip at speeds above 750 kph IAS (indicated air speed). Thankfully, forcing an opponent down low effectively seals his/her fate as you and your team performs optimally at low altitude.