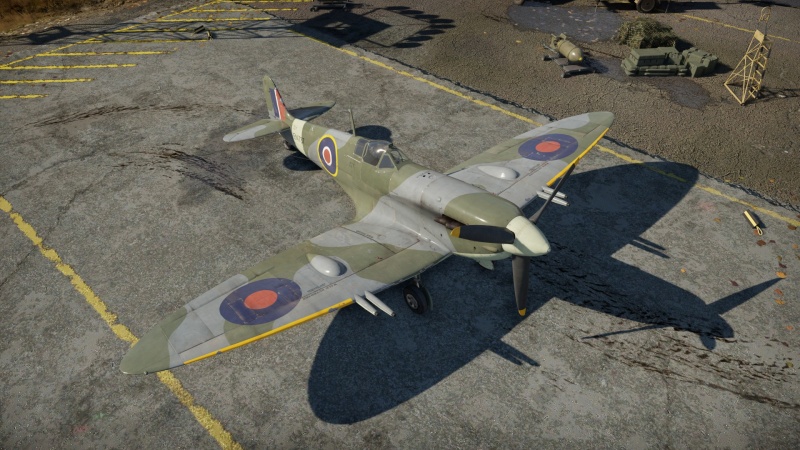 The Spitfire Mk Vc is armed with:

The Spitfire Mk Vc does not have as high a climb rate as other Spitfires, but it does make up for this in manoeuvrability and firepower. Like all Spitfires, this one is a very good at turning with nearly any opponent that it might face. Trying to lure the enemy into extended turnfights is one of the most effective tactics to use in this plane. Thanks to a decent straight-line energy retention, the plane can also boom and zoom fairly well. However, keep in mind that control surfaces do suffer from compression at high speeds. Roll rate is dramatically reduced above 600 km/h, and elevator authority similarly suffers above 700 km/h. This can make it difficult to get guns on target in high-speed boom and zoom runs.

As for firepower, this vehicle is armed with 4 x 20 mm cannons. Being wing-mounted, convergence is important for these guns, but they can do considerable damage if they connect. It is recommended to set a convergence of 300-400 m, and to hold fire unless at these close ranges.

The Mk Vc's engine has high fuel consumption when using WEP. So, it is important to keep an eye on remaining fuel levels, and on certain maps it may be necessary to take high fuel loads.

In a straight line, the Spitfire's top speed cannot compete with many of its American and Russian counterparts. You may sometimes find yourself being chased down by faster aircraft, and in these scenarios the best thing to do is either to look for teammates to back you up or to try luring them gradually into a turnfight.

A single-seat, single-engine all-metal monoplane fighter, this variant of the Spitfire Mk V was fitted with the new Type C "universal" wing, capable of being fitted with a variety of armaments. The Mk VC could be fitted with four 20mm Hispano cannons, or it could carry two 20mm Hispano cannons and four 0.303 inch Colt-Browning Mk II machine guns. The cannons in the type C wings had a tape supply and so could carry up to 120 rounds per gun, unlike the type B wings, which were limited to 60 rounds. In addition, the Mk VC had other modifications to the airframe such as a strengthened fuselage, more armor, larger oil cooler and a new windscreen design.

Production of the Mk VC variant began in October of 1941, with the first aircraft being equipped with a Rolls Royce Merlin 45 or 46. However, with the appearance of the German Focke-Wulf FW190 fighter, Spitfire pilots found themselves being outmanoeuvred at low and medium altitudes.

The Mk VC was then fitted with Merlin 50, 50A, 55, and 56 engines. To improve performance characteristics at low and medium altitudes, some of these engines were fitted with a cropped supercharger impeller to allow maximum power to be reached at lower altitudes. Engines designed this way included the 45M, 50M, and 55M.