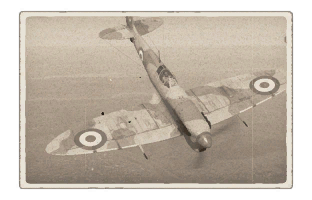 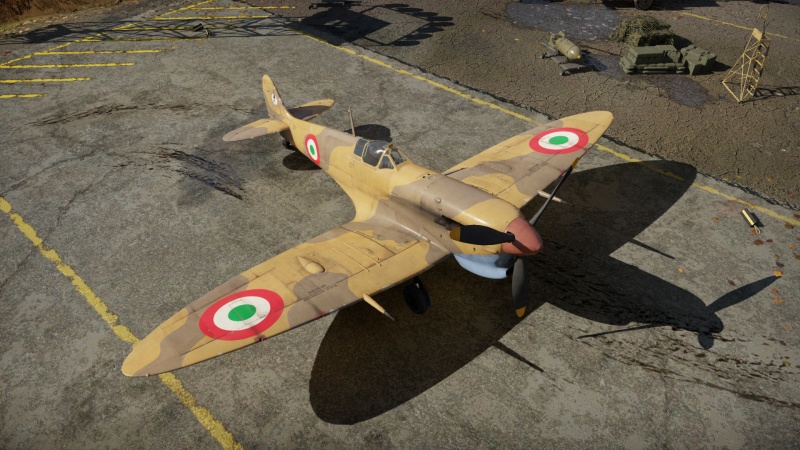 The ▄Spitfire Mk Vb/trop is a premium rank III Italian fighter with a battle rating of 3.7 (AB/RB) and 3.3 (SB). It was introduced in Update 1.77 "Advancing Storm".

This Spitfire, part of the 51°Stormo, represents the Italian side known as the Italian Co-belligerent Air Force (Aeronautica Cobelligerante Italiana), which fought along the allies in the last years of the war.

The capabilities of this British Spitfire provide a fresh air in performance, plus an excellent premium boost useful for the aspiring Italian pilots looking to master the powerful planes down the ranks.

The Spitfire Mk. Vb/trop is a well-rounded fighter that can turn excellently. When the plane has not been fully upgraded, the Spitfire Vb/trop's Merlin 45 engine has less power than the Merlin XII engine of the Spitfire Mk IIb. The Spitfire has outstanding energy retention and easily gains speed in a dive and retains it after pulling out into more level flight. In addition, it does not lose speed too quickly in a turn and thanks to outstanding acceleration from the Merlin 45, the aircraft easily accelerates after pulling a high-G turn that initially bled a large amount of speed.

However, the newer, more powerful, heavier engine and airframe only has more energy retention capability due to being heavier than the Spitfire IIb. This means that the aircraft cannot turn as tightly or as fast as its predecessor. The extra weight comes from the new cannons, which are slightly longer than the more powerful Merlin 45 engine.

The Spitfire Mk Vb/trop has a quoted rate of climb of 17.8 m/s at around 255 km/h in a moderate climb, however, when factoring in 20 minutes of fuel reduces is capability and it can manage around 22.7 m/s in a climb at 251 km/h IAS. In addition, by alternating between shallow and sharp climbs, one can make the Spitfire climb much faster in the initial stages of the match. Through practising these techniques, it is possible to achieve an end result of an average of around 20-21 metres per second in a single, steady climb to 4,000 m. The aircraft's nose was kept pointing 15 - 20 degrees during this climb.

This Spitfire has a good turn time compared to its opposition and cannot be out-turned by anything save for a Japanese Zero. However, its 16.8 second turn time and slightly wider turn radius are a far cry from the first Spitfire Mk Ia's turn radius and turn time. Don't expect to out-turn everything. While you have good energy retention, you have low manoeuvrability below 250 km/h. A prime tactic used by enemy pilots is cutting speed near the ground, resulting in you ramming into terrain. Don't let that happen. If the target's too slow, break in the opposite direction and turn back at them, beginning another series of scissors. If not, then pull out. They'll have lost a lot of speed by cutting the throttle and nearly nothing rivals the acceleration of a Spitfire Vb/trop under 4,000 m save for high-performance Soviet aircraft.

The Spitfire Vb/trop, however, begins to lose its edge below 280 km/h IAS. It begins to slow down, become sluggish, and starts to show its weaknesses. Although it has good energy retention, it will lose a lot of speed turning above 400 km/h, and loses speed slowly but steadily in a turn below that speed. Beginning at 270 km/h IAS, the aircraft begins to lose speed and agility until it becomes heavy and unwieldy beginning at 250 km/h.

A favourite tactic of Fw 190 A-1 pilots to use against Spitfire Vb/trops is to keep the Spitfire turning until it loses speed, or to utilize their outstanding roll and acceleration to turn the fight into a vertical manoeuvring fight that moves upwards. They utilize a series of loops & Chandelles to force the Spitfire to lose energy, bait it into a turnfight and then attempt to use their superior acceleration and energy retention to force the Spitfire to lose speed and either crash or become a sitting duck. Spitfire pilots are advised not to engage in an extended turnfight with an Fw 190 A.

The Spitfire Mk Vb/trop (Italy) is armed with:

The Spitfire Vb/trop is armed with two pairs of British .303s with 350 rounds per gun and two Hispano Mark II cannons with sixty rounds per gun. The Hispano Mk. I only have 60 rounds of ammo, stored in drums. The 7.7 mm guns have 350 rounds each. In continuous firing, assuming that no jams happen at all, the Hispano's ammo will dry up quicker than the 7.7 mm Brownings. However, jams do happen and the Hispanos will jam quicker than the Brownings.

The Spitfire Vb/trop fills the role of an aerial superiority fighter in the early Italian tier III lineup. It cannot fulfil any ground attack duties due to its low cannon ammunition pool and the absence of any heavy machine guns which can penetrate a tank's thin roof armour. In addition, the aircraft cannot carry any bombs or other air-to-ground ordnance. Like most Spitfires, the Spitfire Mk Vb/trop is meant to be used as a pure aerial superiority fighter, while fighter-bomber duties are relegated to other aircraft, such as the Ro.57 Quadriarma.

A possible strategy is akin to that used on the C.205 serie 1, using the cannons sparingly. Use the cannons when in the aircraft's most effective convergence range and envelope, and use the machine guns to 'sight' the cannons. Fire the machine guns tracer belts for maximum AP-I and tracer ammo, using the similar muzzle velocities to get an idea of where the cannon rounds will go, and then fire cannons once you are getting consistent hits. If your cannon ammo drops to 50 rounds or below that, try and return to base quickly. That way, if you get bounced on the way back, you can at least have some cannon ammo left to surprise any raider looking to kill you.

Go for deflection shots against enemy aircraft. These shots are side-on shots where you "lead" an enemy aircraft in front of you, and get off a burst when you're not directly behind them, but instead when they're turning. While this may be difficult for newer players, it provides valuable training and is a good learning experience for later tiers. In addition, should you use this technique, you can easily cause enemy planes' wings to completely fall off if you pull it off right and hit a wing spar. Bf 109s, with their single-wing spars, are especially vulnerable to a well-aimed side-on shot.

After the Italian Armistice on 3 September 1943 and the separation of Italy into the Axis-sided Italian Social Republic and the Allied-sided Italian Co-Belligerent Army. The Allied command decided to reinforce the Italian Co-Belligerent Regia Aeronautica with British and American fighters to replace the ageing previous Italian aircraft, which spare parts and factories were now a portion of the controlled Axis areas in northern Italy.

The Spitfire Mk. Vb was part of those used materials given to the Italian Air force. Over 53 were given since late 1943, mixed with Mk. Vc variants. The completed batch of Spitfires finally arrived in the Summer of 1944. Despite some Spitfires being not suitable to fly safely anymore - as they had extensive use in the RAF and Yugoslavian Air force. The Italians assigned the Spitfires into the 20th Gruppo of 51st Stormo ("51º Stormo Caccia Terrestre") at Leverano as Aeronautica Cobelligerante del Sud.

In 1945 the Italian Spitfire squadron was moved to Lecce-Galatina, where they operated reconnaissance missions and fighter escort for allied bombers along the rest of the 51st Stormo, all equipped with Macchi 202 and 205. They were also involved in the strafing of a German convoy near the Balkans, in which one of the 3 Spitfires attacking got downed by Flak.

Fortunately, Italian pilots at both sides never faced each other during the last years of the Second World War as the Italian Co-Belligerent Air Force was focused on the Balkans and not over German-controlled territory. The 5th of May of 1945 being their last mission of the war.

Ultimately the Mk.Vs were replaced with Spitfires LF in 1948.