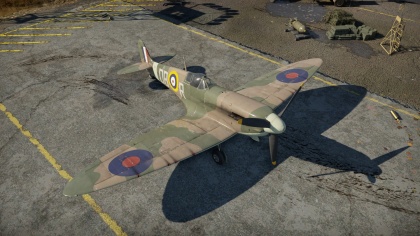 In the summer of 1939, an early Spitfire Mk I was fitted with the new Rolls Royce Merlin XII engine, which had a higher output of 1175 HP and was fitted with a Coffman engine starter instead of the previous Merlin’s electrical starter system. This, combined with the Rotol variable pitch propeller which had been used on many Spitfire Mk Is would now form the powerplant of the new Spitfire Mk II, although some production models used the De Havilland propeller. The Mk II was some 6-7 mph faster than the later Spitfire Mk I, but still slower than the original Spitfires before a series of modifications increased the aircraft’s weight. As with the Mk I, the Spitfire Mk II was produced with either eight machine guns as the Spitfire Mk IIA, or two 20mm cannon and four machine guns as the Mk IIb. The earlier problems with cannon fitted to the Mk IB had now been solved by introducing a belt feed system to the weapon to replace the earlier drum, turning the cannon on its side and fitting a blister on the wing to house the new mechanism.