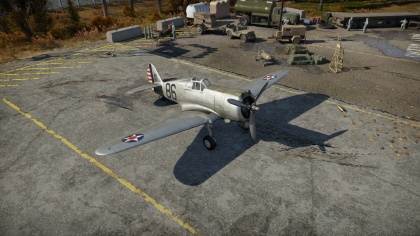 The Rasmussen's P-36A Hawk is a gift rank I American fighter with a battle rating of 1.3 (AB/RB) and 1.7 (SB). It was in the game since the start of the Open Beta Test prior to Update 1.29. Rasmussen's P-36A Hawk is a unique American low tier aircraft in War Thunder. Although it does not appear in the American tech tree, it can be purchased through a DLC pack on Steam. The plane is modelled after the one that Philip M. Rasmussen flew on the island of Oahu during the Japanese attack on December 7, 1941.

By May 1935 the first prototype flew and attained speeds of 281 mph (452 km/h) and reaching an altitude of 10,000 ft (3,000 m). It wasn’t long before the original 900 hp Write XR-1670-5 radial engine was replaced with an upgrade Wright XR-1820-39 Cyclone at 950 hp and several modifications to the body of the aircraft was completed like the addition of scalloped rear windows which significantly improved the pilots rear view (although the hump on the back of the aircraft still blocked a significant portion of the view).[2][3] This version of the aircraft was designated as Model 75B while oddly enough the earlier version with the 1670-5 was listed as a Model 75D.

In early competitions against the Seversky P-35A saw the underpowered and more expensive P-35A as the winner in the U.S. government's eyes, however, the United States Army Air Command (USAAC) went ahead and placed an order for three Y1P-36 prototypes as a backup contingency fighter. When delivered, the Y1P-36 (Model 75E) had been outfitted with the 900 hp Pratt & Whitney R-1830-13 Twin Wasp engine. Due to this version of the aircraft performing so well, an order for 210 P-36-A fighters was placed.[2][1]

The P-36 was known as an outstanding turning aircraft due to its extremely low wing loading and had a beefy power-to-weight ratio of 0.186 hp/lb that placed this aircraft as one of the best climbing aircraft of the time.[3] One drawback noted was that the P-36 was not outfitted with a supercharger which hampered its ability to operate at high altitudes, requiring it to stay under 10,000 ft in altitude.[1] For all of this aircraft’s positive attributes and unfortunate shortcomings, it performed well mostly for other nations such as Finland where the Hawk was known as “Sussu” or Finnish for “Sweetheart” as between 58 Finnish pilots flying the Hawk, they scored 190.3 aerial victories. The P-36 was the proving ground and stepping stone to the later great fighter, the P-40.

As with many early pre-war fighters, not much emphasis was put on the survivability of the aircraft. The best course of action was for the pilot to not let anyone get behind them. The Rasmussen's P-36A’s only sources of protection for the pilot is the engine block and the 9.5 mm (angled at 24° for effective thickness of 13 mm), that being said, depending on the engine block to save the pilot may do so at the expense of the engine, thus requiring the pilot to glide back to base if possible or bailout. The P-36 lacks self-sealing fuel tanks, so if any of the three are punctured (one directly behind the pilot and two below the pilot’s feet) they will leak fuel and if accompanied by fire, will rapidly degrade the aircraft structure to failure and destruction.[2] There are also two unprotected oil coolers if which are punctured, the aircraft will leak oil until depleted eventually causing the engine to seize up.

For the Rasmussen's P-36A fighter, the armament of a single 12.7 mm and 7.62 mm machine gun is quite weak in comparison to the level of performance this aircraft is capable of. Later Hawks rectified this situation by adding two or four machines guns. For this aircraft, both machine guns are mounted in the engine cowl and fire through the propeller arc. The disadvantage to this is that the machine guns are limited in firing rate due to being synchronized with the rotating propeller; however, with these guns nose-mounted, there is little need to adjust for convergence. Options in ammunition will allow the pilot to select the type best suited for their mission whether it be as an interceptor, ground target hunter or a stealthy pouncer.

The initial flight took place in 1935 and when it was presented at a competition the next year, the competitor aircraft (Seversky SEV-2XP/P-35) was heavily damaged in transit. While Seversky took their aircraft back to perform repairs and modifications, Curtiss took the opportunity during this time to make some modifications of their own, and namely replacing the Wright XR-1670-5 twin-row air-cooled radial engine with the upgraded Write XR-1820-39 Cyclone radial.[1] With the Seversky aircraft repaired, the competition was back on. Even though the Seversky aircraft underperformed and was more expensive than Curtis X-17Y, it was selected and an order of 77 aircraft were put in for, however later the Material Division of the USAAC contacted Curtis and put in an order for three examples as they were becoming nervous about Seversky’s ability to deliver their aircraft on time. Curtiss worked on modifying the P-36 by again upgrading the motor and working on the cockpit, especially increasing the amount of area behind the cockpit where the pilot could see. During the 1937 competition, test pilots who piloted the P-36 all commented that the aircraft responded to pilot input favourable and at all speeds and even noted that it handled well on the ground while taxiing. With such a reaction from the test pilots, the USAAC put in an order for 210 P-36A fighters, which at that time was the largest single US military aircraft order since World War I.[2]