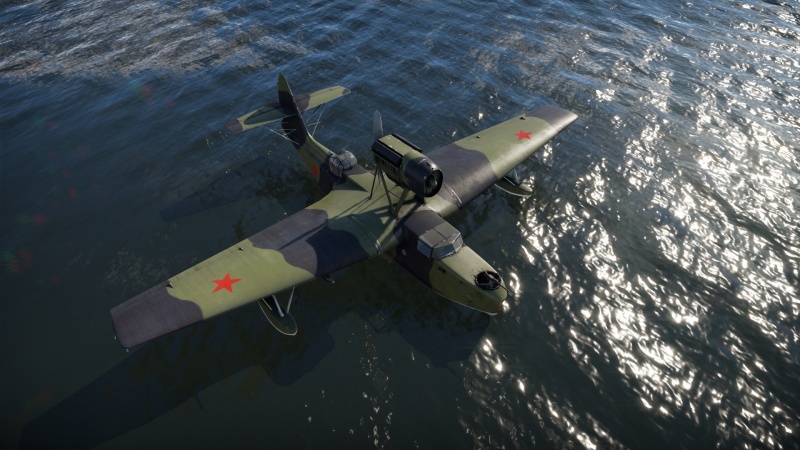 The MBR-2 has surprisingly good survivability taking into account that it has no armour protection. Its main weak point is the engine, it is very exposed and prone to taking hits - something to be expected for a top-mounted engine. But if you don't sustain critical damage to the engine or catch fire, the sturdy fuselage and wings often tank out most light machine gun fire which it faces.

Landings are also of course a risk for the MBR. For landings on solid ground it is recommended to lower your speed to under 200 km/h, that way you don't damage the fuselage and have less of a risk of ripping your wing or wing pontoons. Same applies for water landings which are substantially better for the plane since it's what it's designed for.

In short your engine is vulnerable, fires usually burn through your wooden fuselage and landings should be done at slow speeds.

The MBR-2-M-34 can be outfitted with the following ordnance:

The MBR-2 was a Soviet multi-purpose (including reconnaissance) flying boat. It entered service in the Soviet Navy in 1935 and 1,365 were built, in 6 versions. Some were used by foreign countries, including Finland and North Korea. In the Soviet Union, it sometimes carried the nickname of "Kорова" (cow) and "Амбар" (barn). After the Second World war, the plane was used to watch over fishing areas.

It saw extensive service during the Soviet-Finnish winter war between 1939 and 1940, and against Germany from June 1941. It demonstrated reliability and robustness throughout these conflicts. Several MBR-2s returned safely to missions after receiving enemy fire. The MBR-2 was able to be equipped with wheels or skis, thus adapting to many areas of operation. Faced with the shortage of aircraft in flight, its armament was adopted in June 1941 by the Soviet authorities to carry out night bombardments, then diurnal. It's very slow speed made it very useful for submarine hunting.

The in-game MBR-2 is the MBR-2bis (also known as MBR-2AM-34). It was developed in 1935 as an improved version, powered by the Mikulin AM-34N engine, and fitted with an enclosed cockpit, a dorsal gun-turret and enlarged vertical tail. The machine remained in production until 1941 with this configuration.