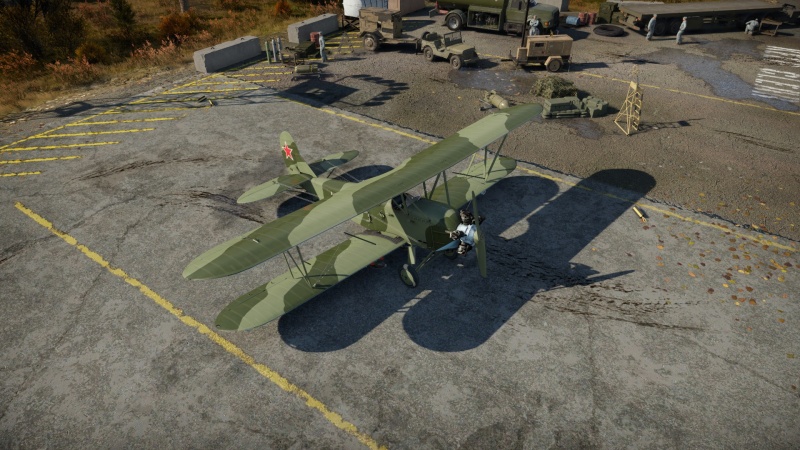 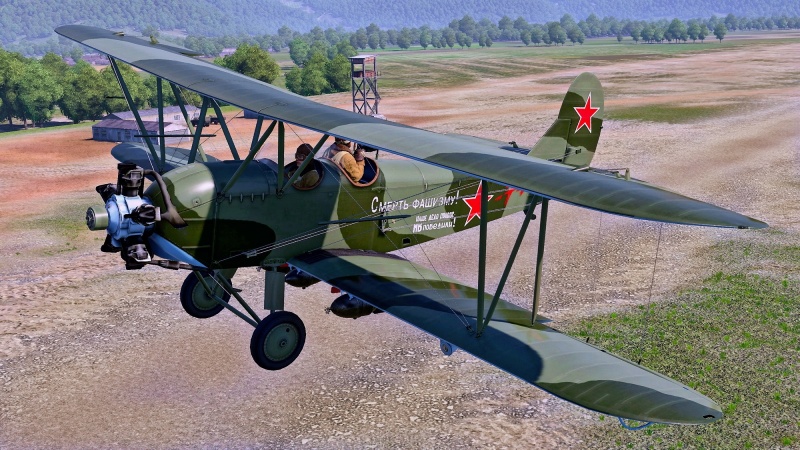 The Po-2 is a gift rank I Soviet bomber with a battle rating of 1.0 (AB/RB/SB). It has been in the game since the start of the Open Beta Test prior to Update 1.27. One of the more infamous planes in War Thunder, the Po-2 has a rather affectionate palindrome nickname of "2-OP" from the community for its history in the game. This plane is no longer obtainable unless it is given out during events (during every Halloween event since 2013).

The Po-2 is a very slow aircraft, earning a reputation of affection thanks to its poor characteristics. The Po-2 is about nine times as slow as the jets, and its maximum speed is one-third of a good amount of its opponents at BR 1.0. Being so, it is flown mostly for sheer fun with no intent of competitiveness. It does not come without its strengths, though - the Po-2 can carry a very effective bombload, and it can be very evasive against enemy aircraft, thanks to its slow speed and impressive manoeuvrability. The rear gunner is also decent, being in charge of a very effective machine gun. Unfortunately for the Po-2's enthusiasts, this is also the only armament it has, and the aircraft is so fragile that even a fast-firing gun does not often suffice to rid the Po-2 of a sad fate. Whenever confrontation with fighters is avoidable, one should avoid it and stay safe.

When the Po-2 was added, it was originally unlockable by research as a non-premium vehicle. However, it is currently hidden in the tech tree. The Po-2 can still be acquired, though. Once in a while, there is usually an event that rewards the Po-2 for completing it. It should be noted that while it appears before the BB-1 in the tech tree, users who have not unlocked the Po-2 via events or researching it before it was hidden will not see it in the tech tree. Additionally, the Po-2 is separate from the attacker line, and you do not need to have the Po-2 unlocked to research the BB-1 and the aircraft that follow it.

The Po-2 lacks any form of armour plating or bulletproof glass. In Air RB, the Po-2's airframe is surprisingly reliable and is perfectly controllable even with serious damage, however, past a certain amount of damage (yellow all over and worse) you will not have enough power to keep airborne for much longer. At this point, you can make an emergency landing and act as an anti-aircraft gun for the rest of the match.

It also has a small, self-sealing fuel tank, as well as a tiny oil tank in from of it, both just behind the engine. This leads to a low chance of catching on fire, however, if you are set on fire you have very little chance of putting it out due to your slow speed.

The Po-2 can be outfitted with the following ordnance presets:

The Po-2 is defended by:

The Po-2 does at times shine in Ground Realistic Battles, being potentially useful at any battle rating. Its slow speed makes it very easy to dive-bomb accurately with, and its 100 kg bombs are sufficient to put any tank out of order. A Po-2 pilot can even cause great humiliation to Maus commanders. However, tanks' light machine guns are no small threat for the small biplane, and even tanks' main guns can give it a very bad day, let alone dedicated AA platforms. To avoid this, Po-2 pilots should fly low and try their best to not fly in a straight line, and plan their attacks ahead, looking at the map to see where enemies were marked and inferring the enemies' locations from cap points.

In Air RB, your best bet is probably to spawn at bomber altitude as opposed to the airfield which, while presenting the risk of wing ripping, is better than struggling for speed at the altitude which most of the fighting at this rank takes place (that is, low altitude). Furthermore, you should take the 6 x 50 kg bombs as, despite being smaller, they mean you have the chance to destroy 3 higher value targets instead of 2. You should choose a group of ground targets to attack, stationary tanks are good to bomb as any bomb can destroy them and they yield a decent reward. Moving targets are horrible and not worth it as short fuses lead to you being hit by your own bombs and long fuses lead to a very low hit probability since your bombs are small and must detonate very close to the target to have any effect, which is incredibly difficult to guarantee with a fuse.

After using up your bombs, find some vehicles, artillery, or AA emplacements you want to destroy and approach them. Be sure to use evasive manoeuvres as you approach, as your slow speed leads to AA hitting you far more often than it would on other planes. Flyover, but slightly to the side of your targets at a very low altitude, then switch to your rear gunner and destroy them (if you fly directly over then your tail will prevent your tail gunner from getting a shot). After destroying 2 targets using this method you should fire off your remaining bullets and let your gunner reload, as otherwise, you will probably run out of ammo halfway through your third strafing run. Since you can reload as many times as you like, this is a sustainable way of doing decently well, and you can destroy upwards of 20 targets (with some luck, on the right map.)

If attacked by enemy aircraft, you stand a small but appreciable chance of destroying them. When approached, point your aircraft directly away from the enemy and shoot at them with your rear gunner, preferably once they are within half a kilometre, though your gun can be effective out to 800 metres with some luck. If you have them unlocked, Universal belts are the best for almost all situations, since they make aiming far easier and more importantly have a higher chance of setting the attacker on fire, which will down them almost every time. As well as this, some pilots will break off once they are set on fire or seriously damaged, since they don't judge the effort to be worth it, but most pilots don't tend to think like this and require a "Significant Emotional Event" in order to stop shooting at you.

It should be noted that some people up-tier Po-2s into jet battles, which can be a valid strategy with the right tactics. You should always fly low in jet battles because most jets will not waste their altitude and energy on a Po-2 flying at treetop level. "Most" is the operative word here and even if you don't get downed, many jet battles are over before you even reach your intended target, even on smallish maps such as Malta. It has been noted that a North Korean Po-2 was credited with a jet-kill during the Korean war when an attacking F-94 Starfire stalled out trying to line up a shot at a Po-2 and crashed.

Thanks to its short landing distance, you can land at a helipad in mixed ground battles (at top-tier), repair and rearm and get an air spawn.

The Po-2 was the primary aircraft of the infamous 588th Night Bomber Regiment of the Soviet Armed Forces. The Regiment, commonly nicknamed "Night Witches" was the only regiment in the world to entirely consist of women. The regiment was often looked down upon by their male counterparts, but as the Second World War raged, they earned the undying respect of the Soviet Army. Their nickname "Night Witches" comes from the characteristic sound of their Po-2's, that was all that could be heard during their nightly raids as their engines were set to idle and they would glide through to Night to their victims, completely silent. This sound, or lack thereof, brought their enemy's thoughts to the broomsticks of Witches and thus called them "Nachthexen". Meaning Night Witches in English.

Every single member of the Night Witches had by the end of the war flown at least 800 missions, which was completely unheard of. Especially considering that an American pilot was generally allowed to retire if he survived 25 missions. Some of the most famous Night Witches, Yekaterina Ryabova and Nadezhda Popova were reported to once have completed 18 ground attack missions in a single night. Not only was it extremely humiliating for the German Army to be defeated by the outdated Po-2, but the fact that they were piloted by women added insult to injury. It went on to the degree that German High Command offered to award the Iron Cross to anyone that shot down a Night Witch. Only 30 people claimed that bounty in the entire war.

Twenty-three Night Witches were awarded the "Hero of the Soviet Union" title, 2 the "Hero of Russia" title and 1 the "Hero of Kazakhstan" title. 24,000 sorties and 23,000 tons of bombs dropped on target is also on their résumé. As the war went on and they became Heroes in the Soviet Union, they were offered better planes, but they refused. They stuck with the Po-2, they flew it when the war started and they continued to fly it when they participated in the Battle of Berlin in 1945.

The Po-2 was used in the Korean War by the North Koreans, where it inflicted considerable damage against airbases. United Nations forces found it incredibly difficult to track and shoot down Po-2s, due to the wood and fabric construction of the plane giving it a very small radar signature. The top speed of the Po-2 was well below the stall speed of most aircraft at the time. It's also the only biplane credited with a jet kill, achieved when a Lockheed F-94 Starfire attempted to attack a low-flying Po-2 and stalled in the process, losing control and crashing.