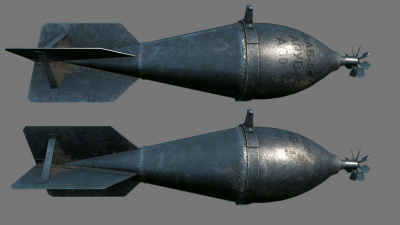 FAB bombs typically functioned with a single nose fuse, a single tail fuse or both which then served as a redundant trigger if the nose fuse failed. Soviet bombs are generally dark grey as the primary overall colour and typically are marked with designation weight in kilograms (e.g. FAB-50), fuse type, explosive or chemical filler and the number of auxiliary boosters (only found on bombs 250 kg or heavier). The tail fin will also include markings, such as year of manufacture, lot number produced from and factory number.

A top view of a FAB-50sv bomb with identification of parts (old model).

FAB-50 bombs are constructed one of two ways, either forged or welded. The forged version is a bomb body which is a single unit of forged steel, the nose shape is ogival, the midsection is cylindrical, and the aft section is conically tapering to where the base adapter is located in which the tail unit is attached.[1] This bomb was not designed to be utilised with a tail fuse. The tail unit of the forged bomb is of box construction and is held into place to the base of the bomb with a spanner lock nut. This version of the bomb has a striking resemblance to U.S. AN-M general purpose bombs of similar weights. A single suspension band is fitted to the bomb allowing fitting to either bomb bay shackles or external payload pylons.

Welded FAB-50 bombs are two forged steel sections of tear-drop shape which are fused just aft of where the suspension band is fitted. Like the forged bomb, the rear section is conical while the nose of the bomb is ogival which concludes at the fuse adapter. The base of the bomb has a threaded extension which the tail unit is attached and held with a locking nut. Also, like the forged bomb, the welded version cannot be fitted with a tail fuse. The tail assembly for the welded bomb consists of a cone which has four fins either welded or riveted along with four struts which act as supports for the fins through riveting. To allow the welded bombs to be fitted to an American bomb shackle (B-25J-30 and P-40E-1 specifically), an additional suspension band is added to the bomb for a total of two suspension bands.[2]

The Soviet bombs featured in War Thunder are composed of straight TNT explosive filling, which was the preferred filling when it came to the larger FAB bombs, especially during peacetime when the explosives would be in storage for a long duration. A tell-tale sign of bombs using TNT is the black smoke which is produced from the oxygen-deficient explosion of TNT when detonated with a tetryl booster.

The FAB-50sv is the lightest of the FAB series of bombs allowing it to be used between a wide range of fighters, attackers and bombers. The FAB-50 is a small bomb. However, it should not be discounted as it excels in use with low-level attacking or bombing aircraft. Even fighters which may carry one or two of these bombs can effectively take out a soft vehicle or AAA gun as a secondary target. Bombers which can carry a greater quantity can make short work of vehicle convoys or AAA clusters where blast radii will overlap and compound the damage inflicted to enemy targets. Unless these bombs are being dropped on a base, high altitude bombing of vehicles or AAA targets becomes very inaccurate, because the vehicles will have a chance to scatter or due to altitude and dropping of the bombs, the landing rate will be very wide between bombs and likelihood that most will miss the target.

The Soviets had varying types of bombs, fuses and fillers which they employed between 1939 and 1945. Early bombs used through 1942 were pre-war stock which was considered crude in design and manufacture, especially due to relying on unskilled labour and shortage of supervisory personnel in the manufacturing process. With old stock dwindling, a new effort was put into refining the design, manufacture and ballistic quality of the newer bombs.

While the Soviet bombs in War Thunder feature TNT filler, other fillers were used during the war in bombs such as the smaller FAB bombs (100 kg and under) typically used a 78% picric acid and 22% dinitronaphthalene mixture, similar to the Mélinite-Mononitro-nitronaphthaline (M.Mn) or Trimonite used by the French in their G.A.M.Mn 50 (50 kg) bombs. Other mixtures used by the Soviets include included 80/20 TNT/Ammonium nitrate, 50/50 TNT/Ammonium Nitrate and 80/20 TNT/Dinitronapthalene.