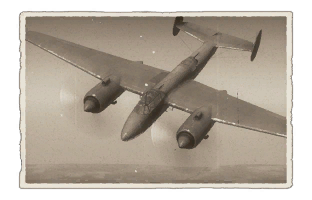 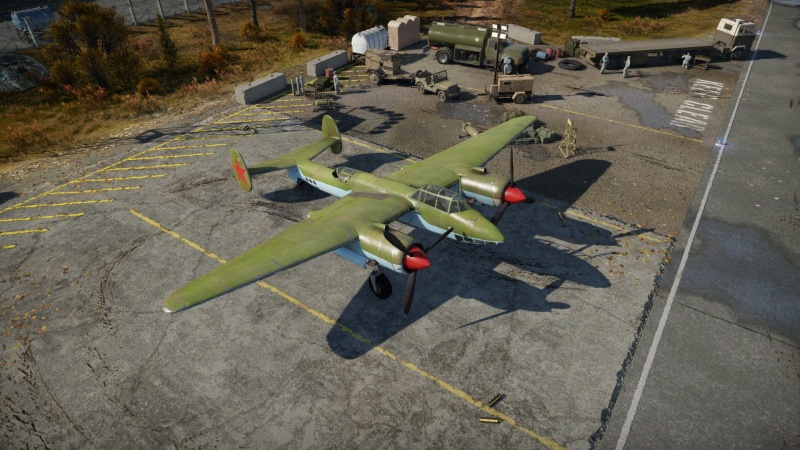 The Tu-2 is a gift rank III Soviet bomber with a battle rating of 4.0 (AB) and 4.3 (RB/SB). It was introduced before Update 1.17 and was obtained for free by players participating in the Closed Beta for Airplanes (2013 or before). The Tu-2 is currently unobtainable.

The Tu-2 can be outfitted with the following ordnance:

The Tu-2 is defended by:

When bombing anything, note that the center of the reticule should be aimed below the target by about a centimetre (looking at the screen). This will allow the bombs maximum precision. Remember to open the bomb bay doors before attempting to drop the bombs. Once the payload has dropped, begin attacking artillery and AAA guns with the 20 mm cannons. Fire in short bursts to conserve ammo, as the more of these light targets are destroyed, the better. Never attack light pillboxes with the frontal cannons. The ammo spent attempting to destroy these (~200 rounds) isn't worth it. Always attack lighter targets, or if the situation presents itself, enemy aircraft. Once the bombs and cannon ammo are exhausted, then high-tail it back to the airfield. Fully upgraded, the Tu-2S can maintain ~450 km/h on the deck, no problem. Be careful upon landing, as the plane tends to stall at ~175 km/h. Rearm, and repeat.

An all-metal cantilever monoplane with a twin-fin tail and a retractable landing gear system with tail wheel. This aircraft was designed by OKB-29 of the NKVD's Special Technical Bureau, under the direction of Andrei N. Tupolev, as a twin-engine bomber to operate near the front lines and in raids at the enemy's rear (the project was called "FB", which stood for "front-line bomber").

The 103 (ANT-58) prototype plane made its first flight on January 25, 1941. A production version of the aircraft having two Shvetsov M-82 fourteen-cylinder double-row radial air-cooled engines with a take-off power of 1,700 hp was designated as the 103VS. It differed from the 103V prototype model in its enlarged main landing gear wheels and its simplified equipment. Full-scale production of the aircraft started in March 1942, and the plane was then renamed the Tu-2.

The first series was armed with five 7.62mm ShKAS machine guns (including two fixed guns mounted in the nose), two 20mm ShVAK cannons located in the wings, and ten RS-132 unguided rockets. The firepower of the ShKAS machine guns was already considered insufficient by then, and thus the defensive armament on planes already built was upgraded. When the first Tu-2s arrived at the front lines, they were equipped with two or three 12.7mm UBT machine guns instead of the ShKAS models.

In some cases, the aluminum used in construction was deficient, so some of the plane's structural parts had to be made of wood, most notably the forward fuselage, the tail cone, and the wing tips.

After its combat debut, the Tu-2 received high accolades. It was praised for things such as its high bomb capacity, powerful and lasting air-cooled engines, comfortable crew space, powerful armament, and good flight performance. But the first series of Tu-2s were extremely costly. Moreover, the aircraft suffered from a great number of defects and low production quality. In October 1942, due to the plane's high cost and the urgent need for fighter planes, a strategic decision was made to discontinue production of the Tu-2. Only a total of 80 aircraft had been produced.