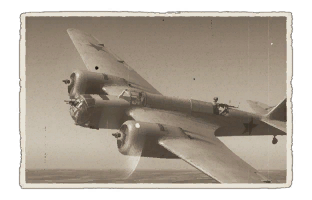 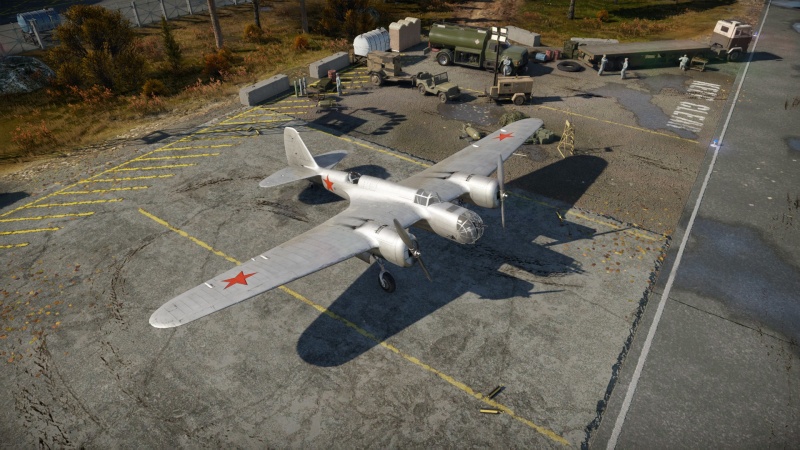 The SB 2M-100 is a fast bomber, capable of reaching almost 400 km/h stock. At its low battle rating, it is capable of outrunning some of the fighters it encounters, such as the F3F and I-153 Chaika. With enough energy though, it can outrun early monoplanes such as the Ki-27, the F2A (rare), and even a P-36.

The SB 2M does not have any armour except for the pilot's back seat, which features 6 mm of armour plate. The fuel tanks are not protected but they are self-sealing. The gunners are all exposed with the exception of the nose gunner. The dorsal gunner has his torso sticking out of the plane. As a result, if trailed, pull some small evasive manoeuvres making it harder to disable the gunners.

This bomber is quite fast for its BR so you should use this as an advantage. For example, climb directly at the beginning of the match to 5,000 m and destroy the enemy bases with the 500 kg bomb, which is the heaviest payload you'll have with this plane. Note that a good reload speed can make it easier to take out all the bases more quickly. A more aggressive playstyle is available for this plane. You can destroy small yet valuable ground targets with the 6x 100 kg bombs. This is however a much more risky playstyle for the SB 2M.

In realistic battles, you are guaranteed to destroy a base if you stay high. Do not under any circumstance dive bomb bases. Fly level and maintain altitude, and nothing will be able to climb to catch you. However, you can also destroy ground targets while flying at low level. If you need to destroy ground targets, take the 6x 100kg bombs. The defensive armament in this plane is rather decent when the enemy is travelling at low speed. The ShKAS machine guns have a really fast rate of fire and good damage output. Just remember that these guns jam VERY quickly compared to other guns. Be mindful when pressing the trigger.

The SB 2M should be landed with care. Not only does it like to bounce up into the air again, but a very light touch on the brakes is required, because it is very easy to nose over, even at surprisingly low speeds. Flying several practice takeoff and landing cycles in test flight mode is highly recommended.

In Sim, the overall tactic remains the same as other bombers: base/airfield bombing. However, the SB 2M is super hard to control in the pitch. If you leave the stick at the dead zone, the aircraft will automatically climb or dive which will lead to a crash if unnoticed. Trimming doesn't help. For the gunner view, even though you might have the "autopilot when in gunner view" enabled, it won't help either, as it will still continuously pitch up and down like a boat. Also note that when switching to gunner view, it will sometimes uncontrollably roll to one side which will make it enter a spin quickly. Therefore this bomber is extremely frustrating to fly in simulator.

When bombing airfields, make sure to fly above 2,000 m to avoid the anti-aircraft artillery, as this plane is unprotected and its cooling systems will often be damaged, leading to the engines overheating. You should familiarise with each module of the airfield to maximise the damage. The airstrip is the most visible and the easiest one to hit, however, bombing it seems to halve your reward. So it is recommended to bomb everything else: hangar, fuel area, living quarters, etc. The plane hangars are probably easy since they aren't too small.

If your plane is an early biplane armed with weak MGs (2-4 x 7.7 mm or below), you should use deflection shots. That is, imagine yourself as an anti-air missile, predict where you two will meet and fly towards that point. This way it gives the gunners little window to open fire at you. When firing, try to aim for the cockpit for a possible pilot-snipe, as the pilot is very unprotected or aim at its engines to damage it or the cooler. Without an engine, the SB 2M won't fly far.

The manual engine control in this plane is really easy to get used to. The only controls present are Mixture and radiator. Keep the mixture at 60% when flying at higher altitudes, and adjust the mixture to 90% when flying nearer to the ground. The radiator can be kept at 20% normally, even under WEP. If the engine starts to overheat in hotter climates, keep opening the radiator till the temperature returns to normal.