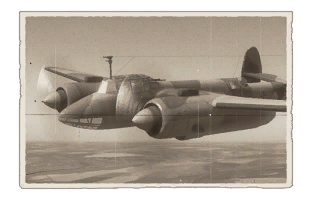 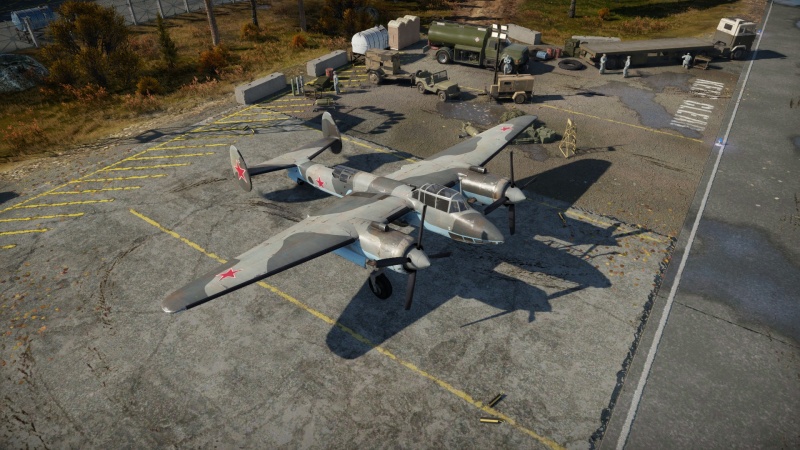 The Tu-2S-59 is an extremely versatile ground attacker, with a moderate payload better suited for destroying ground targets than bases. Although the tactics are different for arcade battles, in Realistic, the plane should be flown quite aggressively. It is recommended to equip the 4 x 500 kg bombs (or just two if the modules haven't been acquired yet) in order to destroy as many armoured foes as possible. Additionally, use a two-second bomb delay to allow ample time to escape the blast radius.

The defining feature of the Tu-2S-59 is its single defensive 20 mm cannon in place of the 12.7 mm machine gun found on the two older models. Other than that and its increased BR, there isn't much difference between this and the older Tu-2S and Tu-2S-44. See above for battle tactics.

The Tu-2S-59 can be outfitted with the following ordnance:

Once spawned (~3,500 m), locate ground targets to engage. It is suggested to engage the targets farthest from the enemy's airfield in order to avoid detection. Attack pillboxes (light or heavy, it doesn't matter with 500 kg bombs) as these don't move. Only engage the AI tanks if there are no pillboxes, and if engaging the tanks, judge the speed of the tank column, and release the bombs, making sure to lead where the tanks will be as the bombs fall, not where they are in that moment.

When bombing anything, note that the center of the reticle should be aimed below the target by about a centimetre (looking at the screen). This will allow the bombs maximum precision. When releasing the two bombs from the bomb bay, hold the flight pattern for about 1/2 a second longer than normal to compensate for the opening of the bomb bay doors. Once the payload has dropped, begin attacking artillery and AAA guns with the 20 mm cannons. Fire in short bursts to conserve ammo, as the more of these light targets are destroyed, the better. Never attack light pillboxes with the frontal cannons! The ammo spent attempting to destroy these (~200 rounds) isn't worth it! Always attack lighter targets, or if the situation presents itself, enemy aircraft. Once the bombs and cannon ammo are/is exhausted, then high-tail it back to the airfield. Fully upgraded, the Tu-2S-59 can maintain ~450 km/h on the deck, no problem. Be careful upon landing, as the plane tends to stall at ~175 km/h. Rearm, and repeat!

Unfortunately for the Tu-2S-59, it has a battle rating of 6.3. This is a double-edged sword, as on one hand, the Tu-2S-59 has to fight enemy jets, notably the Horten 229 and the Me-262, but on the other hand, these pilots are typically experienced and won't sacrifice their altitude for a ground pounding Tu-2. However, should the Tu-2S-59 be engaged, here are some suggestions per plane.

Do not engage a fighter on purpose, the following is only for defensive and survival reference

Horten 229
This plane is agile, fast, and dangerous, possessing a pair of Mk 103 cannons. When engaged with one of these planes, force a head-on pass if he is either below or on equal altitude as the Tu-2S-59. Once the pass has concluded, and if neither of the two are down, push the throttle to WEP and run. When the 229 turns to pursue, it will catch up. Use the defensive turrets at this point, as these are the Tu-2S-59's only hope for making it out alive. Aim for the pilot.

Me 262 A-1 and A-1/U4 Pulkzerstorer
These planes are a tough opponent. They are fast and possess better armour than the 229, so the turrets are not going to be as effective in destroying these enemies. Again, if the enemy is below or on equal altitude as the Tu-2S-59, force a head on pass and run after it ends (if able). Use the turrets, but know that these planes are designed to be bomber-hunters, and are ruthlessly efficient in their task.

F-80A, F-80C & F-84B-26
Although most matches with the Tu-2S-59 will be on the Berlin map, mixed battles and alternate history is always a possibility. For these planes, use the same tactics. Force a head on, and then run after. Use the turrets to attack them while withdrawing.

Late War Props (Spitfire 24, Fw-190 D-13, F8F, etc.)
These are a somewhat rare occurrence at the BR of 6.3, however they should never be ignored. If possible, run back to base and don't commit to a head on with props, as they have a little more time to aim their shots and steady their plane. Rely mostly on the defensive turrets if needed.

Player-Controlled Flak (Kugelblitz, Crusader AA, etc.)
These are the bane of bombers (especially medium-sized ones such as the Tu-2S-59). When the tracers fly, don't risk a dive. Circle around or find some unsuspecting flanker that is outside the cover of these AAA guns.

If confronted with an enemy Tu-2S-59, initiate a head on pass but then pitch up and stall their plane out. Additionally, maintain a safe altitude and utilize Boom & Zoom tactics, but it is worth noting that the Tu-2 is able to turn adequately.

The last stage of the Tu-2S's full-scale production began in 1949. The bomber's defensive armament was upgraded yet again. Production planes continued to be manufactured with machine guns in manual turrets, which by the late 40s seemed an obvious anachronism.

In August 1948, a VEU-1 electric turret with a 20mm Berezin B-20 cannon was tested on series 55 aircraft, and from the spring of 1949 on it was used in mass production. The VEU-1 replaced the VUB-68 upper defensive turret.

More powerful GSN-300 electric generators also began to be installed. In addition, a new fire suppression kit, an RSB-5 radio set and strong LFSV-45 retractable lights were added. Beginning with series 59, a Goodrich de-icing system was installed on the front edges of the wings, horizontal stabilizer, and fins.

In the spring of 1950, production of the Tu-2 was finally discontinued. The last series of planes were intended mainly for export, as the Soviet Air Force was switching to the Ilyushin Il-28 jet bomber. A total of 1,211 Tu-2s (including all variants) were produced during the post-war period of 1946 to 1950. Afterward, some previously built planes were updated. From 1948 on, TON-2 rear attack warning radars were mounted on some of the aircraft. The ASh-82FN engines were replaced on a mass scale with later series engines with improved reduction gear; radio altimeters and new radio sets were installed, as well.

During the post-war period, as the industry supplied the Tu-2s, practically all units of the USSR Air Force were rearmed, replacing their Pe-2s and any lend-lease bombers.

After the war, the Tu-2s were accepted for service with the Air Forces of Poland, Hungary, Bulgaria, China, and North Korea. The Tu-2s of the Chinese Air Force took an active part in the Korean War of 1950-53.

The Tu-2 aircraft were withdrawn from service with the USSR Air Force by the mid-50s. Virtually none of them were serving by 1954. It was in the flight schools that the Tu-2s continued to fly: some Tu-2s were still active in training units as late as the early 60s.