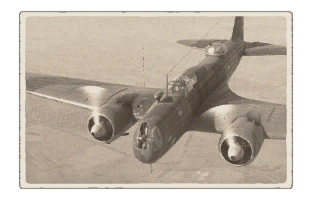 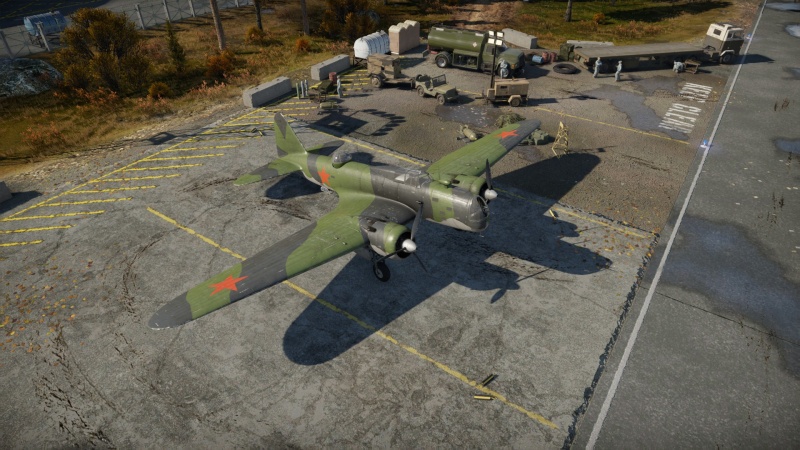 In Simulator, the DB-3 has distinct pros and cons. It is a brilliant base / airfield-bombing plane with a maximum bombload of 1x 1,000 kg + 2x 500 kg bombs, allowing it to easily finish a base or cripple airfield modules in one run. The bombs drop one by one, allowing flexible targeting. (Note that the 1,000 kg bomb drops slightly in-front of the 500 kg bombs.) It is also one of the few USSR planes with torpedoes. It has greatly improved handling and stability comparing with the previous SB 2M, making flying a lot easier. However the DB-3 is quite slow, making it an easy target to pick on. It also has next to no defensive firepower: only 3 x 7.62 mm MGs in total; the one in the nose has great coverage, however most opponents are not likely to take head-ons. The top turret cannot even aim horizontally nor directly at the tail, meaning that the seemingly suicidal tactic of tailing a bomber can actually destroy a DB-3. The belly gun has good negative angle but its horizontal guidance is too limited. Therefore you can only target opponents at your front, upper half and lower rear.

When taking off, the DB-3 will shift to the right, so it is best to set separate keybind for left and right brakes to counter the torque. Given your weak guns, you can only survive if the room is rather empty or if the opponent also has weak firepower. If you are bombing a base, fly at treetop level to force any attacker to engage you from above so you can fight back. Bombing airfield is more dangerous, as you are not only exposed to AAA fire, but also attackers hiding in your gunner's deadzones. Climb to at least 2,000 m before approaching the airfield, then target the modules of fuel sector (surrounded by 4 towers), residential area (a bunch of tents) and hangar (6 giant houses). Bombing the airstrip is the easiest but it seems to give less rewards. If you see an attacker trying to shoot at you, you will have to nudge the plane so that the target is within your gunner's guidance which is very awful. The bullets will not do lots of damage as the target might constantly get into your deadzones. Most of the times against manoeuvring or heavily armed / armoured attackers, you will not survive long.

Landing is easy and similar to the style of the SB 2M. Line up with the airstrip when it occupies around 1/3 of your windscreen and descent to treetop level. Cut throttle to around 0-40% to drop speed to 200 km/h, and deploy landing flaps and gears. Control the throttle so that the touchdown speed is around 140km/h. Like the SB 2M, if you don't slow down enough the DB-3 will bounce off again and again which might lead to a crash. Once you have landed, you can keep braking as the nose will not dip down and cause a propeller strike.

After Sergei Ilyushin's BB-2 failed to compete with Tupolev's SB bomber in 1934, Ilyushin converted the BB-2 into a long-range bomber to compete again against Tupolev's DB-2 in order to recover the resources, energy, and time he had invested in the BB-2. He redesigned the BB-2, using a high-performance engine licensed by the Soviet Union in 1934, to exceed military standards.

Ilyushin began designing the prototype of the DB-3 bomber, the TSKB-26, in 1934. The TSKB-26 was actually a proof-of-concept, featuring a largely wooden fuselage, and made its first flight in the summer of 1935. It flew well and was the first Soviet aircraft to perform double aerobatics, tested by test pilot, V. K. Okkinaki. The real prototype of the DB-3 bomber, the TSKB-30, was completed in March 1936. Compared to the TSKB-26, it had an all-metal structure, extended nose, sliding cockpit canopy, fixed windshield, improved engine fairing and more. The prototype TSKB-30 was demonstrated over Moscow's Red Square on May 1, 1936, performing a 360-degree somersault with test pilot Kirkinarsky at the controls, impressing Stalin and accelerating production. On September 7, the same year, another TSKB-26 prototype set a ceiling record of flying to 11,005 metres with a payload of 2,000 kg.

From 1938 to 1939, the DB-3 bomber's aero-development system gradually changed to the Tumansky M-87A engine and VISH-3 variable pitch propeller, which became the DB-3 2M-87A (DB-3B). The M-87 had the same take-off power, but more high-altitude power output.