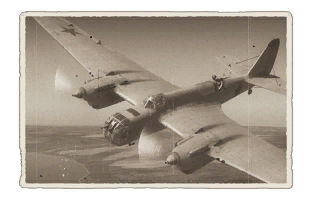 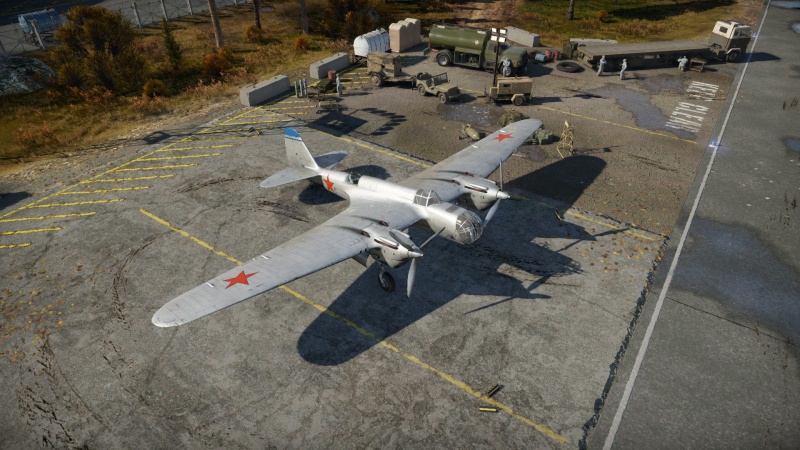 The SB 2M-103U is a gift rank I Soviet bomber with a battle rating of 2.7 (AB) and 2.3 (RB/SB). Though initially in the game pre-1.29, this plane was removed upon Update 1.37 due to redundancy. Those players who acquired the aircraft before it was removed still have access to it.

The SB 2M-103U can be outfitted with the following ordnance:

Note: the setup with the most explosive mass is the 2 x 250 kg + 2 x 500 kg, but this way the two 500 kg bombs are carried under the wing roots and the two 250 kg inside the bomb bay. So if you use the default keybind (space) to open bomb bay and drop bombs, the timing will get messed up when bombing a base, since the two wing-mounted bombs will go first, then the bomb bay opens, dropping the two inside. The time between the two drops is long enough for one drop to completely miss the target. To avoid this, set up a keybind for open/close bomb bay, and drop bomb series (all bombs go at once). When approaching a base, open the bomb bay first, then drop all the bombs, they will now all hit the target.

Given its huge wings compared to the rather skinny fuselage, it can be tricky to land as it will bounce off the ground and leap into the air again and again, no matter how slow it seems to fly. The trick is to slow it down more than any other twin-engine plane, plus set up key binds for "flaps down" and "flaps up" to replace the default "toggle flaps". This way you can use the appropriate flap anytime. When approaching the airfield, make sure to descend to around 400 m when you are approximately 2 km away from the start of the runway. This is an appropriate distance to decelerate. As the airstrip occupies 1/3 of your windscreen, reduce speed to approximately 220 km/h, deploy combat flaps and cancel out that extra lift by pitching down. When you are almost touching down, reduce speed to no more than 160 km/h (seems dangerously slow but it can still glide safely), deploy landing gear, take-off flaps and pitch down even more so the SB 2M remains overall parallel to the ground. At the last second before touch down, make sure you are around 130 km/h and deploy landing flaps. This way the bomber can land gently and softly, and will not bounce off. At last, do not constantly hold the brake. Release brake immediately once the nose starts to dip down to avoid propeller strike.

You should be very careful against bombers since with the Sim control (whether it be mouse joystick or a real stick) the plane will manoeuvre much more gently, making yourself a great target for the bomber's gunners. Do not follow behind the SB 2M's six unless you are sure that its tail gunners are unconscious. Chasing behind the SB 2M makes yourself pretty much stationary for the tail gunners, and you will be showered with 7.62 mm bullets.

If your plane is an early biplane armed with weak machine guns (2-4 x 7.7 mm or below), you should use deflection shots. That is, imagine yourself as an anti-air missile, predict where you two will meet and fly towards that point. This way it gives the gunners little window to open fire at you. When firing, try to aim for the cockpit for a possible pilot-snipe, as the pilot is very unprotected or aim at its engines to damage it or the cooler. Without an engine, the SB 2M won't fly far.